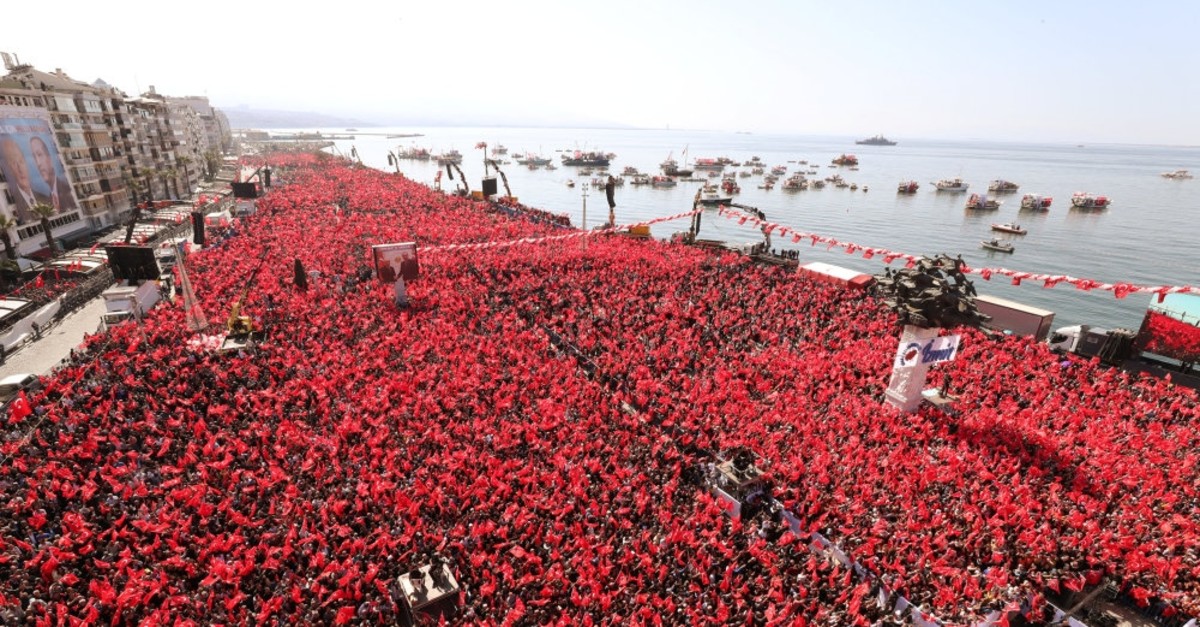 Izmir province, on the western coast of Turkey, deserves to be better administered with more effective municipal services and infrastructure projects that address public needs, the leaders of the People's Alliance, formed by the ruling Justice and Development Party (AK Party) and Nationalist Movement Party (MHP), said Sunday during their address to a large crowd in their first joint rally for the upcoming local elections.

"The CHP thinks that it can easily win in İzmir and does not care about the people of Izmir," the AK Party Chairman and President Recep Tayyip Erdoğan said, referring to the main opposition Republican People's Party (CHP) during the joint rally with MHP Chairman Devlet Bahçeli. He underlined that the there are many infrastructure problems in the province that have long been ignored by the provincial municipality. He stressed that pollution in the Bay of İzmir remains a significant problem and added that the people of İzmir do not deserve it.

Erdoğan said the first joint rally was held in Izmir, as great importance was attached to winning elections in the city by the People's Alliance.

Thousands of supporters showed up to the mass rally in the CHP stronghold, where the parties did not use their party flags, only using Turkish flags.

Addressing supporters ahead of Erdoğan's speech, Bahçeli emphasized that the People's Alliance was formed on a strong basis in the face of challenges targeting the national interests of the country.

Ahead of the June 24 presidential and parliamentary elections last year, the AK Party and the MHP formed the People's Alliance, which continues for the March 31 elections. The alliance received a majority in Parliament, while their presidential candidate, Erdoğan, won the election with 52.6 percent of the vote. In the rally, Erdoğan thanked Bahçeli for his consistent stance and highlighted that cooperation between the two parties is a natural result. In the local elections slated for March 31, the MHP will support AK Party candidate Nihat Zeybekci. Zeybekci was a former mayor of western Denizli province from 2004 to 2011 and served as economy minister twice: between 2013 and 2015 and 2016 to 2018.

Zeybekci said previously that votes for the People's Alliance in İzmir, which is considered a stronghold of the CHP, are on an upward trend. Pointing to the critical problems of the İzmir Metropolitan Municipality, Erdoğan noted that even though it is the duty of the municipality to manage problems, AK Party governments solved İzmir's water problem.

"The Istanbul-İzmir highway project, which will reduce the 8-hour long distance to 3.5 hours will be completed this year," Erdoğan said and announced that a large city park will be created on the campus of Ege University. The president added that a public hospital with 2060 bed-capacity would be opened in İzmir. While the People's Alliance presents projects and plans to take İzmir Municipality to a higher level, the CHP and its alliance lack any projects, he added.

Commenting on the CHP's alliance with other parties, Erdoğan said that the Good Party (İP) and pro-PKK Peoples' Democratic Party (HDP) did not nominate candidates in various provinces and instead will support the CHP to get ahead of the People's Alliance. He criticized the CHP for not standing up and clearly announcing its cooperation, particularly with the HDP.

Erdoğan noted, "Even though the CHP is attempting to hide its cooperation with the HDP, the co-chairman of the HDP said that the CHP should know that if their candidates win it will be with the votes of the HDP."

The government has long accused the HDP of close links with the PKK. The HDP is known for its support for autonomy in regions where large Kurdish populations live. Some of its members have also been charged or accused of having links to the PKK terrorist organization.