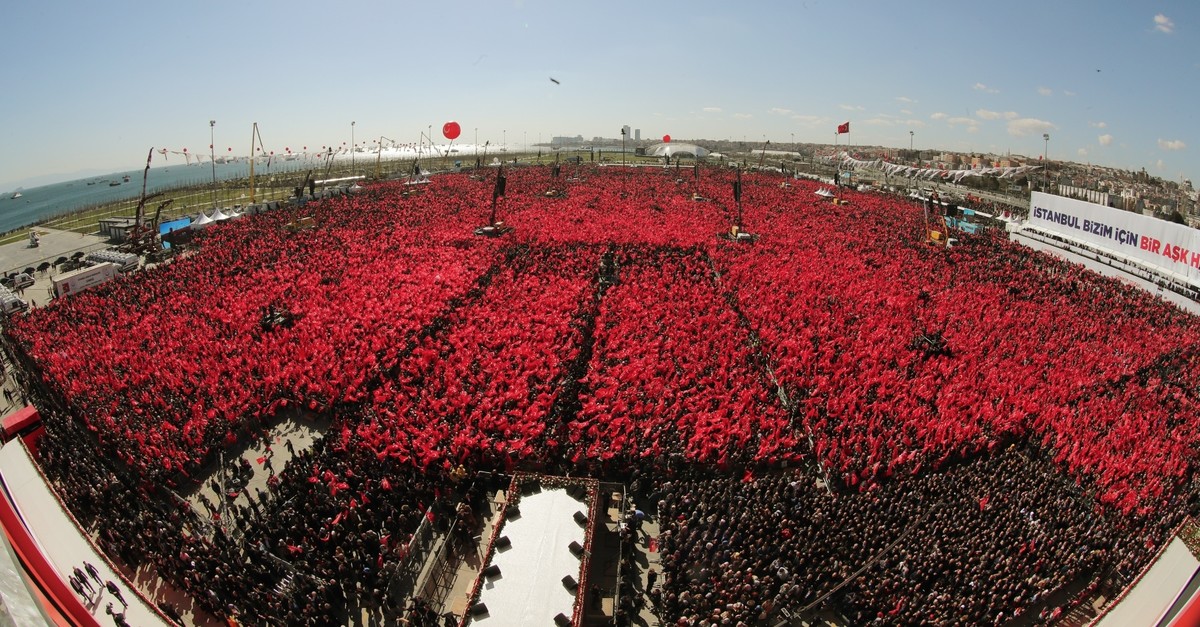 Addressing a massive crowd at a major joint People's Alliance rally in Istanbul's Yenikapı Square, President Recep Tayyip Erdoğan said that services in Istanbul will continue after the local elections, just as they have for the last 25 years

The People's Alliance, which is formed between the ruling Justice and Development Party (AK Party) and the Nationalist Movement Party (MHP), aims to attract votes with the announcement of tangible megaprojects that are planned to change the face of Istanbul. Addressing a massive crowd of 1.6 million people at a joint rally in Turkey's commercial capital yesterday, the chairman of the AK Party, President Recep Tayyip Erdoğan said that the services his party is providing in Istanbul will continue unabated following the upcoming local elections.

"By becoming united with Istanbul's people, in 25 years, we have not only saved the province from the dirt and trash, we have also made the city the star of the world today," Erdoğan said, adding that he has been a proud servant of the city since 1994. Many politicians built their political careers in Istanbul and Erdoğan is the best known example. In the local elections held on March 27, 1994, Erdoğan was elected the mayor of Istanbul with the Welfare Party (RP). Since 2003, when the AK Party attended its first local elections following its establishment, the metropolitan municipality of Istanbul has been governed by the AK Party. One of the major projects being proposed by the People's Alliance that will improve the quality of Istanbul even more is the transformation process that is ongoing on Yassıada Island. "Once a place where brutal deaths took place, the island will now represent peace as it will be a center for international high-level meetings," Erdoğan said, referring to the gruesome history of the island.

On May 27, 1960, a group of 37 relatively low-ranking officers instigated a military coup to topple the Democrat Party (DP) government, which had been in power since 1950. They accused the government led by Adnan Menderes of leading Turkey to a regime of oppression and down a path of political turmoil.

The DP, under the leadership of Menderes, was the first democratically elected party to win the elections in the republic's history. The coup also marked the beginning of what many see as the darkest page in Turkey's history. Menderes, the first prime minister of the country who was elected democratically, was hanged after the infamous Yassıada Trials, named after an island in the Marmara Sea where the trial took place.

Today, Yassıada, a symbol of the coup, is undergoing a renovation as part of the "Democracy Island" project.

Other projects that Erdoğan revealed at the rally ranged from a biotechnology valley that will create 20,000 jobs to rehabilitation centers for disabled citizens.

"In total, 25 new district squares will be built in the 27 districts of Istanbul, as well as 22 new museums and 12 new youth centers," Erdoğan said, adding that 955 new nurseries will be open in 300 neighborhoods.

"There will be an 'art line' through the coast between the Sirkeci and Yenikapı districts where will be lots of cultural activities," the president continued, mentioning his party's projects. He added that one of the aims is to increase the province's parking area capacity to 123,000 vehicles by 2023.

Comparing pre-1994 Istanbul with the current state of the province in a video, the president criticized the lack of vision of the main opposition Republican People's Party (CHP), saying that "this visionless stance is the reason why their ability to govern is limited."

"There were only 1,596 public transportation buses in Istanbul before 1994, and they were in bad condition," Erdoğan said, exemplifying the conditions in the city.

"Today," he added, "there are 6,225 buses in Istanbul, which carry an average of 4 million locals each day. Half of these buses provides free wireless internet to passengers."

Istanbul is the most important city and the party that wins the elections here is considered as having won the majority across Turkey.

Erdoğan underlined that the fact that the AK Party nominated someone like Binali Yıldırım, who has a lot of experience as the former transportation minister and Parliament speaker, as its Istanbul municipal candidate proves how much the party values the city.

Yıldırım, who played an important role in the foundation of the AK Party, first won a seat in Parliament as a deputy for Istanbul in the fall 2002 elections and served the country as the transport, maritime affairs and communications minister in the 58th, 59th, 60th, 61st and 64th governments. He became Turkey's last prime minister in May 2016.

Also at the rally, the leader of the Nationalist Movement Party (MHP) Devlet Bahçeli said, "Yıldırım will save Istanbul from its problems."

"Istanbul should be entrusted to someone who is up to the task," Bahçeli continued, further praising the People's Alliance candidate.

Regarding Istanbul's importance, Bahçeli said that the province is at the center of People's Alliance's sensitivity.

In terms of the formation of the People's Alliance, Bahçeli said that the alliance is a result of national struggle and stance.

"We had to prioritize our struggle for the homeland and nation and the political parties had to take second place," he expressed.

"Seeing our Kurdish-rooted brothers as equal with the PKK is treason," Bahçeli said.

The recent statements made by Temelli last weekend targeted both the CHP and the far-right Good Party (İP) over their joint candidates in Ankara and Istanbul – Mansur Yavaş and Ekrem İmamoğlu, respectively. Temelli explicitly claimed that both candidates' performances heavily depend on HDP's support and "they cannot ignore this fact."

Yıldırım: I will serve everyone, without discrimination

Binali Yıldırım also took the stage during the rally, saying that he is ready to enliven Istanbul and make it the star of the world once again. "We will make Istanbul a place where everyone will be happy and treated with justice," he said, adding that his power comes from the firm stance of the crowd he was addressing. "As long as you are here, the people who want to harm us are bound to fail," Yıldırım added.

"We will provide services for everyone, without discriminating whether they support the AK Party or not," he emphasized.

Touching upon traffic, one of the biggest problems of the city, Yıldırım ensured that it will no longer be a problem during his mayorship.

"Traffic will no longer be a torture for you; instead, it'll be fun. You'll be able to reach everyone without getting burned under the sun or getting wet because of rain," he said.

Yıldırım also mentioned his planned projects for the city briefly, saying that he will support the people who want to establish their own business and he is determined to make Istanbul a smart city, with the support of the young population.

The massive rally in Yenikapı Square, which spans some 270,000 square meters, featured a huge platform, large speakers, and mega screens so all of the spectators could see the stage.