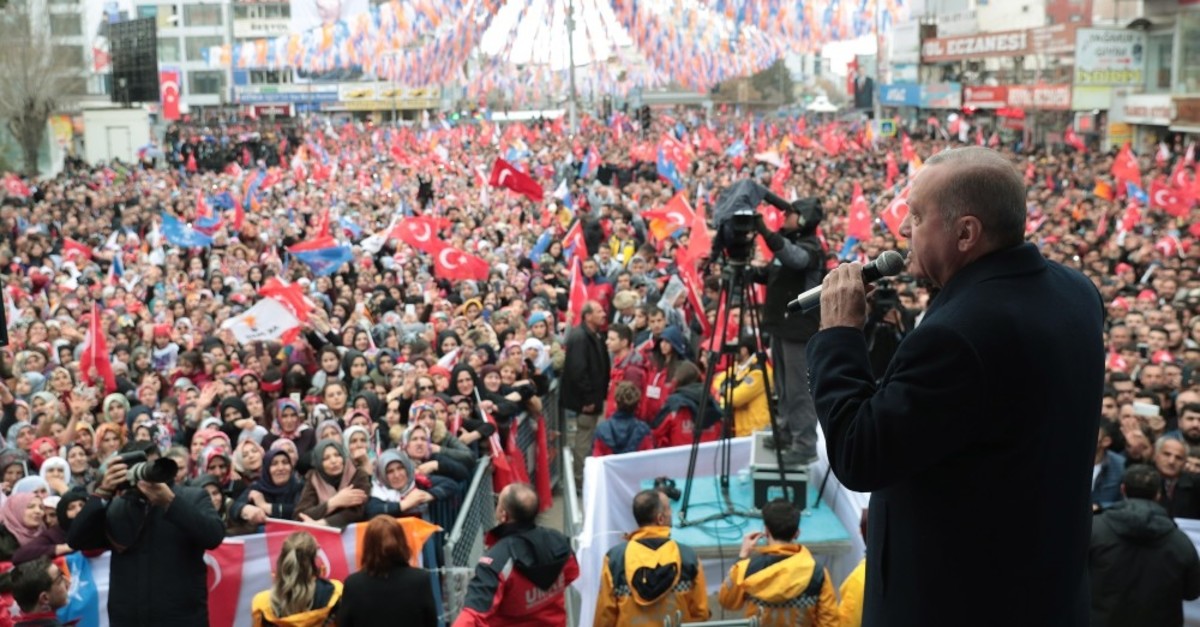 President Recep Tayyip Erdoğan Tuesday criticized the former municipal administrations under the pro-PKK Peoples' Democratic Party (HDP) in Turkey's eastern provinces and pledged to provide more services and investments to the region. Speaking at a rally in the eastern province of Van, Erdoğan said: "They dug holes and tunnels in cities. They violated people's privacy," in a reference to the cooperation of former HDP municipal administration with the PKK. Pointing to the state's battle against terrorist organizations, Erdoğan said the government aims to liberate the people in the region from terrorist oppression. "We have tried very hard to solve the problems of our Kurdish brothers through economic development and by restoring their rights and liberties," said Erdoğan.Van is one of the Kurdish-majority provinces, where the election race is expected to take place between the Justice and Development Party (AK Party) and the HDP.

The HDP is known for its support for autonomy in the regions where large Kurdish populations live. In addition, some of its members have been charged or accused of having links to the PKK terrorist organization that has been fighting the Turkish state for more than 30 years and has killed more than 40,000 people.

In the 2014 local elections, the Peace and Democratic Party (BDP), which preceded the HDP, had won in 11 cities, taking the provinces of Mardin, Bitlis and Ağrı from the AK Party. While the BDP took 53 percent of the popular vote, the AK Party received 41 percent of the votes. Bekir Kaya, the elected former mayor of Van, was dismissed from his role in 2016 due to his cooperation with the PKK. He was then replaced by the government-appointed trustee, İbrahim Taşyapan.

The state had appointed trustees to HDP-linked municipalities due to their cooperation with the PKK. Since 2016, Turkey has removed the elected administrations of 93 municipalities in the region for their links to the PKK terrorist group. The new administration's named trustees have been welcomed by locals as they brought new services and cut the money flow to the group.

The trustees, mostly bureaucrats who serve as district governors in the region, are lauded by the public for the numerous positive changes they have brought to towns and cities. Long-neglected infrastructure was completely renewed, new roads and social facilities were built while green spaces were created.

The municipalities' debts to local businesses were paid off while schools, public buildings and other structures damaged in terror attacks underwent renovation. Stressing the development that Turkey achieved in the last 17 years, Erdoğan added: "No power cannot return Turkey to a state where terrorist organizations flourish."

Erdoğan added that the government has made a total of TL 27 billion investment in Van during the last 17 years and pledged to provide more services in the next term.