Erdoğan calls on citizens to celebrate democracy on March 31 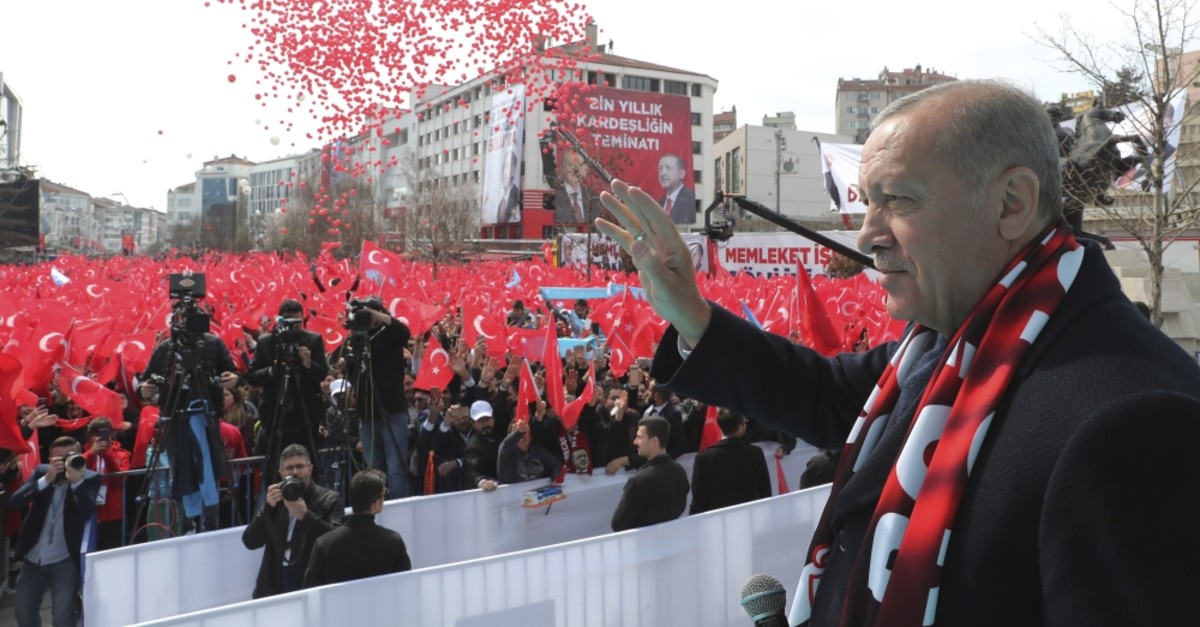 President Recep Tayyip Erdoğan called on voters to go to the ballot boxes ahead of the upcoming local elections on Sunday in order to show their commitment to democracy once again. Speaking at a rally on Wednesday in Turkey's northwestern province of Düzce, a Justice and Development Party (AK Party) stronghold, Erdoğan asked all citizens in Düzce and other provinces of Turkey to go to the ballot boxes. "Turkey has overcome all of its problems until today, thanks to its unity, solidarity and most importantly commitment to the national will. On Sunday, the nation will be revealed at the ballot box." Turkey is known for high rates of voter turnout in elections. As many mature democracies grapple with achingly low voter turnout and apathy, Turkey's electorate bucked the trend, as an admirably astonishing 86 percent of Turkey's citizens keenly exercised their democratic rights and took to the ballot box in the 2018 general elections.

Such a high voter turnout is impressive for the most mature of democracies and bears tribute to the "ownership" of democracy which Turkey's resilient citizens feel. When compared to the world overall, the 86 percent voter turnout was very high, showing the maturity of Turkish democracy.

Erdoğan also mentioned the developments that the government and municipality led in Düzce during the last 17 years. Showing footage of investments, the president said that a total of TL 11 billion in investments was made in Düzce. Düzce is one of the AK Party's strongholds where Erdoğan took 73 percent of popular votes in the presidential elections of 2018 and the People's Alliance took almost 75 percent of popular votes in the general elections of 2018.

In the local elections of 2014, the AK Party took 54.5 percent of the total votes, while the Nationalist Movement Party (MHP) took almost 38 percent in Düzce. Later speaking at a rally in Turkey's northwestern province of Bolu, Erdoğan criticized the main opposition Republican People's Party (CHP) and its Chairman Kemal Kılıçdaroğlu, saying that Kılıçdaroğlu and the CHP do not have the capacity to turn their election promises into reality. "It is easy to lie and say fancy words during the election campaign. It is hard to turn promises to reality and remember what you said during the election campaign. We have always tried to achieve the difficult," he said.

Speaking last month on a TV show, Ali Orkun Ercengiz, the CHP's mayor in Turkey's southwestern province of Burdur, said: "We easily spoke when we were campaigning for the election. However, it all changed when we got into the business." In respect to the investments made in Bolu, Erdoğan said: "We made TL 12 billion in investments in Bolu during the last 17 years." Bringing up the revealing recent confessions by the CHP's Burdur mayor that the party is failing to fulfill their promises, he said that the CHP's true face is being exposed. Erdoğan took almost 66 percent of the total votes in Bolu during the presidential elections of 2018. In the local elections of 2014, the AK Party took almost 50 percent of the total votes, while the CHP took almost 38 percent in Bolu.