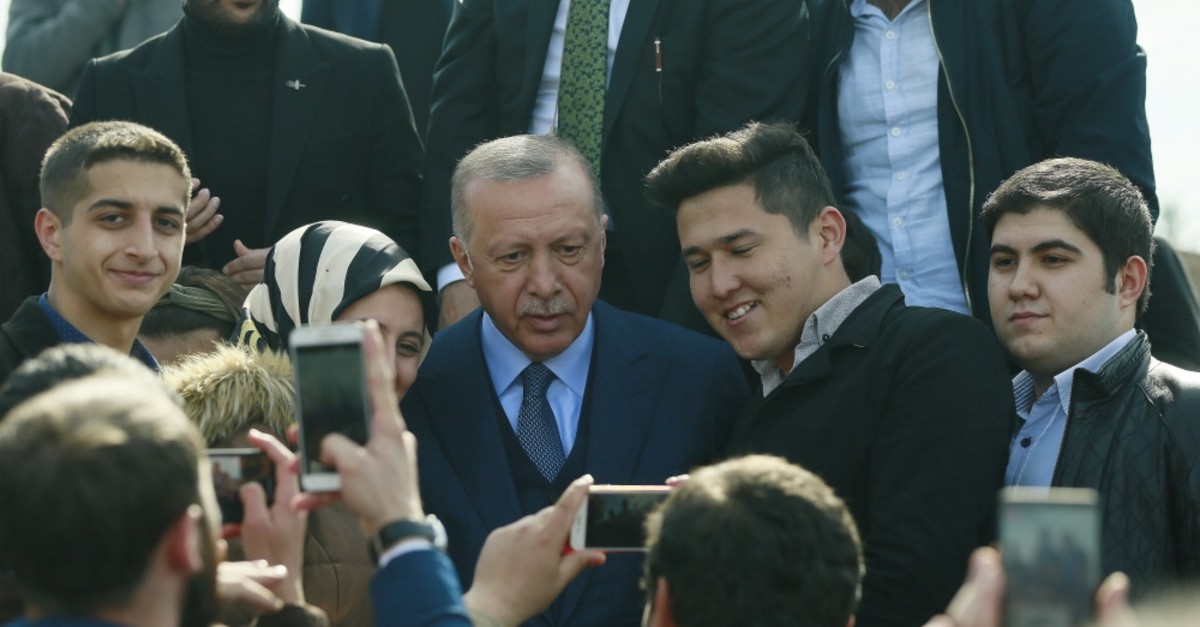 In an intimate meeting Thursday, President Erdoğan had a long conversation with the youth, touching upon various issues, from the New Zealand terror attack to the local elections

With only a few days left till local elections, President Recep Tayyip Erdoğan met with young people in Ankara on Thursday and answered their questions in every respect.

The meeting, which is the second youth meeting with the president, was first announced on Wednesday as a surprise meeting to be aired on social media accounts. "Let's meet on Twitter, Facebook and Instagram," Erdoğan said.

The meeting took place in Atakule, which is a 125-meter high communications and observation tower and one of the landmarks of the city, the meeting was held without a moderator with an intimate atmosphere.

"It is a great source of happiness for me to be with you in such a place with a beautiful view that we can observe Ankara [even] with such a tense schedule as we've reached the final stages [of the election campaign]," Erdoğan said, welcoming the young people who came from various provinces of the country, from Mardin to Isparta.

Touching upon the importance of young people especially when it comes to digital transformation, Erdoğan emphasized that Turkish youth are at a position where they have a high chance to be pioneers in this area.

"We stand by the youth," the president underlined.

Turkey has a large young population with 12.9 million people aged 15 to 24 according to 2018 stats. Population projections by the state-run Turkish Statistical Institute (TurkStat) show the young population will constitute only 13.4 percent of the population in 2040 and drop further in the following decades.

When it comes to investments made specifically for the youth, Erdoğan said that there is a focus on sports facilities in particular. "Our new project is to encourage universities put special emphasis on basketball," the president expressed, adding that he himself is also very fond of sports activities.

"Because of the election campaign, I cannot continue my sports activities. However, I'll get back to it in the upcoming period," he said, urging the youth to not neglect taking part in sports activities. The president also indicated that he is very careful about his diet.

In terms of scholarships for students, Erdoğan said that although many young people want state scholarships, they should also demand education credit from the state since it is not a burden to pay it back. "In the past, there were tuition fees. We've removed them," Erdoğan said.

He also heralded that the construction of the Presidential Library is almost complete, it will be open 24 hours with certain food and drink services available.

In Sunday's election, 1,156,000 young people will cast their votes for the first time, prompting candidates to examine in detail their projects for young people.

"Because of the election campaign, I cannot continue my sports activities. However, I'll get back to it in the upcoming period," he said, urging the youth to not neglect taking part in sports activities. The president also indicated that he is very careful about his diet. In terms of scholarships for students, Erdoğan said that although many young people want state scholarships, they should also demand education credit from the state since it is not a burden to pay it back.

"In the past, there were tuition fees. We've removed them," Erdoğan said. He also heralded that the construction of the Presidential Library is almost complete, it will be open 24 hours with certain food and drink services available. Following the meeting, Erdoğan ate dürüm kebap with the students.

According to the data of the Turkish Exporters Assembly, defense exports were recorded at $2.03 billion last year and maintained a rising trend in the first month of this year.

Mentioning the domestic automobile, Erdoğan said that 85 percent of production comes from domestic raw materials; however, critical parts are made with imported materials. Erdoğan added that domestic companies have to take the initiative for achieving 100 percent national and domestic production. In November 2017, the Turkish public saw the launch of a groundbreaking initiative to manufacture Turkey's first domestic automobile. This goal has brought together the country's largest manufacturers and companies in a consortium that includes Kıraça, Anadolu Group, Turkcell, Zorlu and BMC. The initiative came after repeated calls from President Erdoğan for a joint venture car project by the Turkish Union of Chambers and Commodity Exchanges (TOBB) and the Ministry of Science, Industry and Technology.

Erdoğan also praised the services of trustees in the southeastern province of Diyarbakır and other cities in the region.

Explaining the developments and investments led by the government and trustees, Erdoğan said: "There are some people who look from an ideological perspective rather than looking at services provided."

The trustees, mostly bureaucrats who serve as district governors in the region, have been lauded by the public for the numerous positive changes they have brought to towns and cities.

Municipalities' debts to local businesses were paid while schools, public buildings and such damaged in terror attacks underwent renovation.

HDP is the political offshoot of the PKK

In response to a question about the veiled cooperation between the Peoples' Democratic Party (HDP) and the Nation Alliance [the alliance between main opposition Republican People's Party (CHP) and Good Party (İP)], Erdoğan said: "The HDP is the political channel of the PKK," and recalled certain speeches by the HDP's former and current leaders in the past. Also mentioning the "Resolution Process," Erdoğan said: "They [PKK] did not stick to the decisions made there [Dolmabahçe]. They acted against our decisions." The Turkish government has long accused the HDP of close links to the PKK. The HDP is known for its support of autonomy in regions where large Kurdish populations live. The CHP has refrained from officially including the HDP in its electoral alliance, amid fears of a possible backlash from its secular-nationalist voter base.

In early 2013, the Turkish government launched an initiative publicly known as the "Resolution Process" to end the decades-old conflict with the PKK. The process stalled in 2015 after the murder of a number of police officers and soldiers by the PKK.

US decision over Golan Heights is void

Regarding the U.S. decision of recognizing the Golan Heights as Israeli territory, Erdoğan said what Washington decides does not changes the facts.

"The Golan territories are recorded as territories of Syria with the 1967 agreements by the U.N. They do not have any relations with Israel," Erdoğan said, emphasizing that although U.S. President Donald Trump acts waywardly he does not have the power to change the position of the territories. "I've had a talk with [French President Emmanuel] Macron, he said that he agrees with me and ensured me that he will speak with Trump on this issue," the president expressed, adding that it is not possible for such a decision to be approved by the U.N. Security Council. "We will bring this issue up at the OIC [Organisation of Islamic Cooperation] as well," he indicated. U.S. President Donald Trump signed a decree on Monday at the start of a meeting with Israeli Prime Minister Benjamin Netanyahu saying the United States recognizes Israeli sovereignty over the Golan Heights, territory that Israel seized from Syria in 1967.

As far as the recent rise in anti-Muslim sentiment and verbal attacks on Turkey in Western countries are concerned, Erdoğan said that "they [the Western societies] cannot accept the fact that Istanbul is ours," and this is the reason why they act this way.

"Because of this, they killed 51 Muslims while they were praying there [New Zealand]," he said, questioning whether or not the Western world reacted to this properly.

Expressing that if this attack was to have taken place in the opposite fashion, whereby a Daesh terrorist attacked a church, the Western world would have set the world on fire; Erdoğan pointed to the fact that with this incident the West remained silent.

A brutal massacre took place on Mach 15 in Christchurch in New Zealand where 50 Muslims were killed while praying at two different mosques. It was perpetrated by terrorist Brenton Tarrant, a 28-year-old Australian-born man.

Tarrant killed worshipers in cold blood in the Al Noor and Linwood mosques in Christchurch, including four children younger than 18.