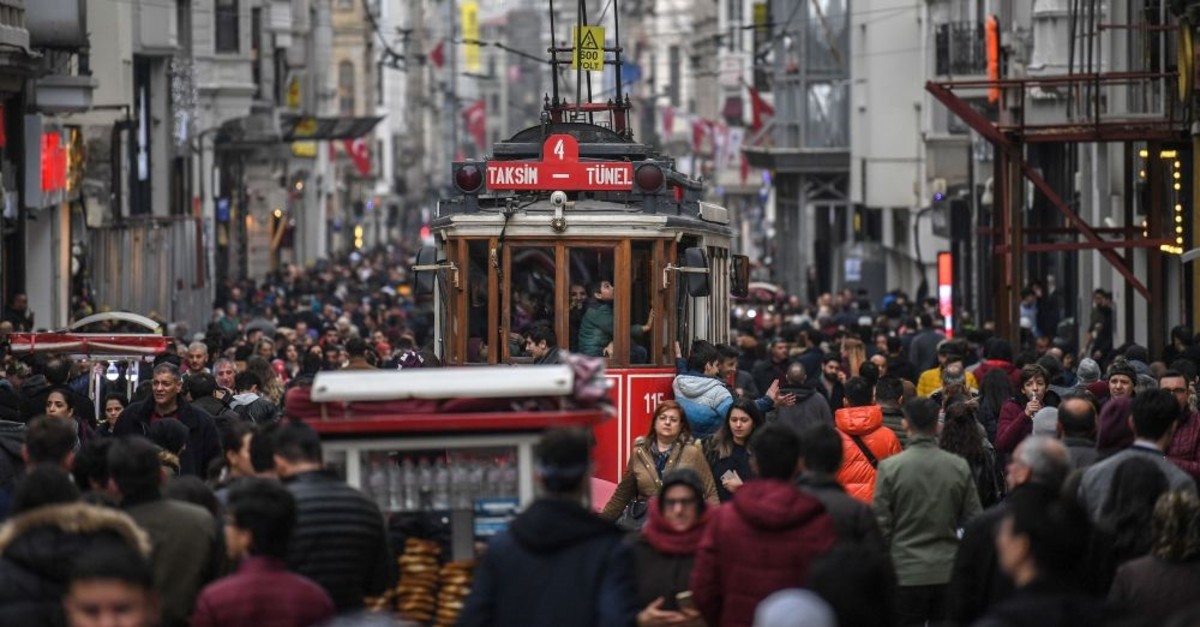 After one of the tightest election races in the country's history, a recounting of the votes will determine the eventual mayor of Istanbul

The ruling Justice and Development Party (AK Party) and the People's Alliance, formed with the Nationalist Movement Party (MHP) claimed on Sunday a clear win in the local elections with 51.64 percent of the overall votes in the country. However, the election results in Istanbul, the commercial capital of Turkey, are yet to be announced by the Supreme Election Council (YSK) as it decided yesterday that votes that were initially deemed invalid will be reassessed in 18 districts of Istanbul after AK Party filed appeals with the YSK's district councils. While only the invalid votes will be reassessed in these 18 districts, in the district of Çatalca, all the votes will be reassessed.

The ruling AK Party had officially challenged poll results in all 39 districts of Istanbul, according to the provincial head of the party Bayram Şenocak. "We have detected significant discrepancies among the tabulated results with wet signatures and stamps, which shows the first vote record, the final record and the total number of votes submitted to the YSK," Şenocak told reporters. Speaking to reporters in Ankara Wednesday, YSK head Sadi Güven said that the recount would mostly focus on invalid votes, adding that this was not an unprecedented decision. Appeals to the YSK were still ongoing, he added.

Turning to the party's challenge of preliminary results in the Istanbul mayoral race, Ömer Çelik, spokesman for the AK Party, said the party abides by the rules and regulations of the YSK and will continue to closely follow the process under the law.

"This is a legal and transparent process observed by the representatives of all parties. We must avoid premature explanations," Çelik said. 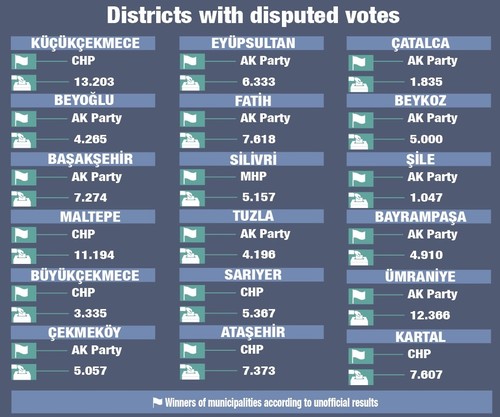 According to unofficial results, opposition candidate Ekrem İmamoğlu, of the Nation Alliance made up of the CHP and Good Party (İP), holds a narrow 22,000-vote lead over his opponent Binali Yıldırım, the candidate of the People's Alliance formed between the AK Party and Nationalist Movement Party (MHP).

On election night, Yıldırım declared victory as he was leading in the polls by a narrow margin, only to be followed by İmamoğlu's announcement of victory. The two candidates' early statements followed by Güven's announcement on Monday morning, saying that İmamoğlu led the polls by almost 25,000 votes according to unofficial results. Immediately after Güven's remarks, the AK Party said that it would object to invalid votes and irregularities in Istanbul, being determined about their victory over the city.

Istanbul is the most important city in the country and the party that wins the elections here is considered as having won the majority across Turkey.

According to official records, Istanbul has a population of nearly 15 million, which represents nearly 20 percent of Turkey's population. Connecting Asia and Europe, Istanbul is considered the most populous city in Europe. Istanbul's economy is responsible for 27 percent of Turkey's gross domestic product, with 20 percent of the country's industrial labor force residing in the city. Speaking at a press conference, İmamoğlu called on the YSK to carry out its duty and give him the mandate as the elected mayor. İmamoğlu said there may be mistakes in the count of votes affecting both candidates, but the overall outcome will not change.

"We want justice," said İmamoğlu, mentioning the AK Party members' past statements about the reliability of the election process in Turkey. The AK Party, on the other hand, questioned İmamoğlu for declaring himself as the mayor in such a certain manner and demanding to be given the mandate following the election, as the YSK has decided to recount votes in 18 of the districts in Turkey's largest city Istanbul.

"Why is CHP's Istanbul mayoral candidate Ekrem İmamoğlu uncomfortable about the ongoing legal process [regarding vote counts]?" AK Party Deputy Chairman Mahir Ünal asked yesterday and added: "On what grounds does he demand to be declared mayor and the process be terminated?"

Despite initial results that showed that the CHP was leading in Istanbul's municipal head race, the AK Party has actually won most of the district municipalities of the city. Looking at 39 districts of Istanbul, the AK Party was the leading party in the polls in 24 districts, while the CHP led in 14 districts and the MHP led in one district. Among the 18 districts where votes are to be reassessed, Ataşehir, Kartal, Sarıyer, Küçükçekmece, Büyükçekmece and Maltepe are the districts where the CHP took the most votes in district elections while Beyoğlu, Başakşehir, Çatalca, Çekmeköy, Eyüp, Fatih, Silivri, Tuzla, Beykoz, Şile, Bayrampaşa and Ümraniye are the districts where the People's Alliance candidates lead.

Previous elections had examples of reassessment of votes

There are examples of changed results due to the recount of votes or technical issues in Turkey's past local elections. In 1994, elections in Istanbul's Fatih and Beykoz districts were repeated due to technical issues. In 2014, election results in the provinces of Yalova and Ağrı were changed after the reassessment of votes.

Still, these local elections were yet another example of Turkey's reliable voting process which was conducted in a secure and transparent environment. Ranking among the top of the countries with the highest turnout rates in elections in Europe, Turkey's deeply rooted democracy proved itself once again.

Turkey has been holding elections since 1930 in a secure, democratic environment, even though the process has sometimes been interrupted by military intervention, making it the oldest and most stable democracy in the region.

Although unofficial results of the local elections circulated in the media, official data is yet to be announced at the end of this week after objections by the parties are evaluated. The appeal process continues in places where complaints of irregularities were made during the elections.

The first appeal period where parties file their objections of the provisional results to the YSK's district election boards ended Tuesday. Following the evaluation of objections, the district boards have had two days to announce the definite district results by today.

Provincial boards have one more day, until tomorrow, to announce the definite results after objections. After that, parties can object to district board results and apply to the provincial election boards of the YSK which will have two days to evaluate the second objections. If the parties object for the third time, then the provincial election boards can come to the YSK within three days. The YSK is expected to announce definite results within the month.

The YSK is assigned from the start until the end of elections in order to manage the order of elections with honesty, to undertake or provide undertaking of all necessary transactions, to examine all electoral complaints and objections and to give final decisions on such complaints and to accept electoral minutes of members of the Turkish Grand National Assembly and minutes of the presidential elections.