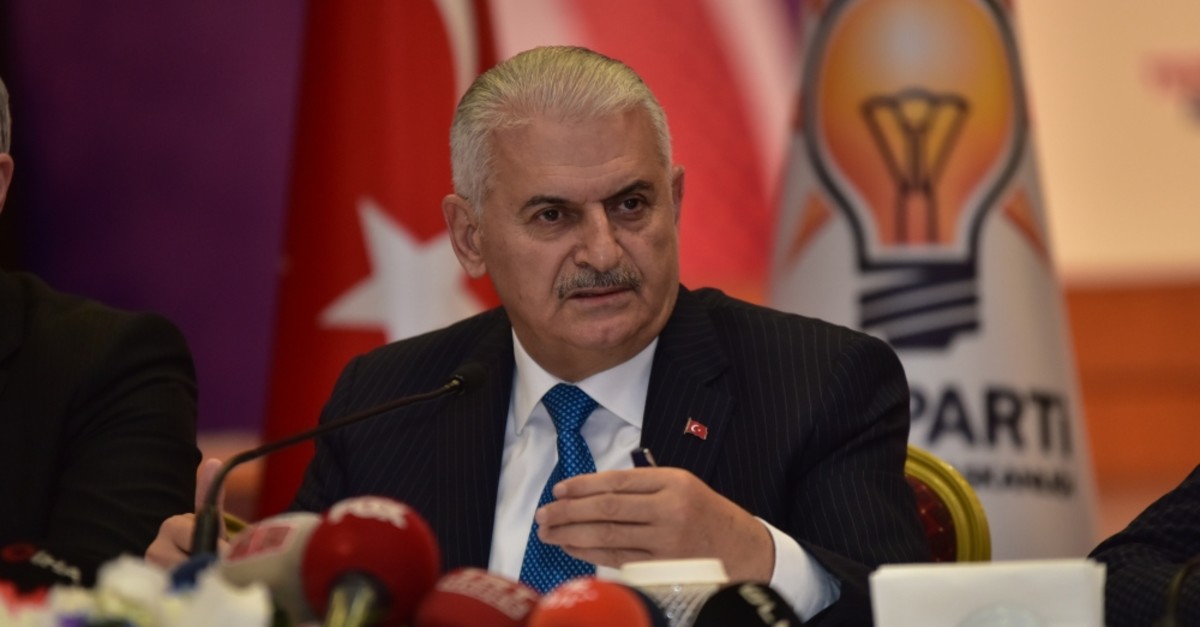 Binali Yıldırım called on his opponent to wait for the legal process to be finalized, while allegations about election fraud are dominating the agenda

The Justice and Development Party (AK Party) Istanbul mayoral candidate Binali Yıldırım said Monday it was "very clear" fraud occurred at the ballot boxes, with AK Party votes registered for Republican People Party's (CHP) candidate Ekrem İmamoğlu. Addressing reporters at a press conference, Yıldırım was accompanied by the party's Provincial Chairman Bayram Şenocak and Istanbul deputy Abdullah Güler. He reiterated the need to wait patiently for the Supreme Election Council (YSK) to declare the winner of Istanbul's mayoral race. Yıldırım added that the elections have to be evaluated in two stages: The first is an administrative process and the second is the legal process that is currently ongoing.

Saying that both sides declared their victories on election night in a very tight race, Yıldırım added that irregularities have become the main topic of debate following the preliminary results. Indicating that a total of 522 appeals have been reported to the YSK by different political parties, Yıldırım said, "All the parties have used their rights of appeal and continue to use it." Yıldırım also said that such appeals have always been a part of Turkey's election history and added: "The first appeal was during the elections of 1946, which was a partly free election. This appeal was from the CHP. The CHP is familiar with the appeal culture."

Yıldırım said their aim is to "prevent the national will from being stolen at the ballot boxes."

On March 31, millions of Turkish voters cast votes in the local elections to choose Turkey's mayors, city council members, mukhtars (neighborhood officials) and members of elder councils for the next five years. An appeal and objection process followed election day as many parties were determined to exhaust all appeals and move the election results to the YSK in certain electoral districts. According to unofficial results, Ekrem İmamoğlu, of the Nation Alliance made up of the main opposition CHP and Good Party (İP), held a narrow 22,000-vote lead over opponent Yıldırım, the candidate of the People's Alliance formed between the ruling Justice and Development Party (AK Party) and Nationalist Movement Party (MHP).

On election night, Yıldırım declared victory as he was leading in the polls by a narrow margin, only to be followed by İmamoğlu's announcement of victory. The candidates' early victory statements were followed by YSK Chairman Sadi Güven's announcement on April 1, who said İmamoğlu led the polls by almost 25,000 votes according to unofficial results. Immediately after Güven's remarks, the AK Party said that it would object to invalid votes and irregularities in Istanbul.

Recounting all votes would change results

Repeating the AK Party's allegations about irregularities in the Istanbul elections, Yıldırım said: "The votes have been defrauded at the ballot boxes, it is very clear. Our votes have been registered for the opposing candidate; that's why the gap is constantly closing in our favor."

"The difference in votes between me and Ekrem İmamoğlu has fallen to nearly 12,200 although only 10 percent of all votes were recounted," he said, noting a reduction from an original margin of 28,000 votes, as announced by the YSK.

"We are confident that this gap would have closed in our favor if all votes were recounted," he said.

Yıldırım added that Istanbul cannot be run by a mayor who comes to office through rigged elections.

Istanbul is the most important city in the country and the party that wins the elections here is considered as having won the majority across Turkey. According to official records, Istanbul has a population of nearly 15 million, which represents nearly 20 percent of Turkey's population. Connecting Asia and Europe, Istanbul is considered the most populous city in Europe. Istanbul's economy is responsible for 27 percent of Turkey's gross domestic product, with 20 percent of the country's industrial labor force residing in the city.

İmamoğlu must respect the YSK process

Criticizing his opponent İmamoğlu's eagerness to be announced as mayor, Yildirim said it was too early to celebrate a victory at a time when legal proceedings on the election results were ongoing at the YSK.

"We must patiently wait until the Supreme Election Council declares the mayor of Istanbul," Yildirim said, adding that the legal process on local elections is still continuing and everyone should respect the process conducted by the YSK.

Yildirim also slammed İmamoglu's messages to foreign governments asking them to pressure the YSK to give him the mandate as soon as possible.

"Reaching out to foreign governments, asking them to pressure Turkey is abhorred by the Turkish people," said Yildirim.

İmamoğlu had called on the YSK to carry out its duty and give him the mandate as the elected mayor, saying there may be mistakes in the count of votes affecting both candidates, but the overall outcome will not change.

The YSK is assigned from the start until the end of elections in order to manage the order of elections with honesty, to undertake or provide undertaking of all necessary transactions, to examine all electoral complaints and objections and to give final decisions on such complaints and to accept electoral minutes of members of the Turkish Grand National Assembly and minutes of the presidential elections.

All eyes on Büyükçekmece, Maltepe districts

Büyükçekmece is a much-debated district where the AK Party has insisted on a do-over election since its Büyükçekmece district organization previously applied to the local election board alleging that 21,000 fake voters had been registered in the district during the process to update voters lists in the run-up to the elections.

"At the end of the investigation on voter registrations conducted in Büyükçekmece, 12 people have gone through legal action, while two of them have been arrested," said Istanbul deputy Abdullah Güler.

Güler also added that 3,155 voters have been erased from voter lists and nearly 7,000 fake registrations have been added. He reiterated that the AK Party had made extraordinary objections in the district demanding the renewal of elections. In Maltepe, the district election board decided to stop the recounting process in some counting stations and re-start the process from scratch, upon the application of the AK Party and the MHP.

Sixteen days after the elections, the counting process in Maltepe has not ended yet, due to unceasing objections from political parties. First, the election district boards decided on Friday to increase the number of delegations responsible for the recounting of votes in the district from two to 12. The recounting process continued until Sunday evening and 914 out of 1,089 ballot boxes were completed; the remaining were expected to be finalized on Monday.

However, the MHP and the AK Party objected to this decision, pointing out that they have not received written notification on the matter. Following the application of both parties, the first and second Maltepe district election board decided on late Sunday, by a majority, to stop the recounting process with 12 delegations and to reinitiate the process with only two delegations.

According to the decision 400 out of 914 counted ballot boxes and the remaining uncounted 175 ballot boxes will be recounted; the process began Monday morning.

On the other hand, the main opposition CHP yesterday lashed out at the recent decision of the Maltepe district election boards, submitting an objection to the YSK.

The party also called for the Council to set up 100 additional counting stations to accelerate the counting process and announce the results as soon as possible.

In relation to the issue, CHP Spokesperson Faik Öztrak yesterday told reporters that the AK Party and MHP have been exerting enormous efforts to delay the counting process. Emphasizing that the do-over election will open deep wounds in the conscience of the public, Öztrak urged authorities to award the election certificate to CHP's mayor-elect Ekrem İmamoğlu.

Lastly, the YSK canceled the decision to stop the counting of all votes in Maltepe and ordered for the continuation of the counting process.