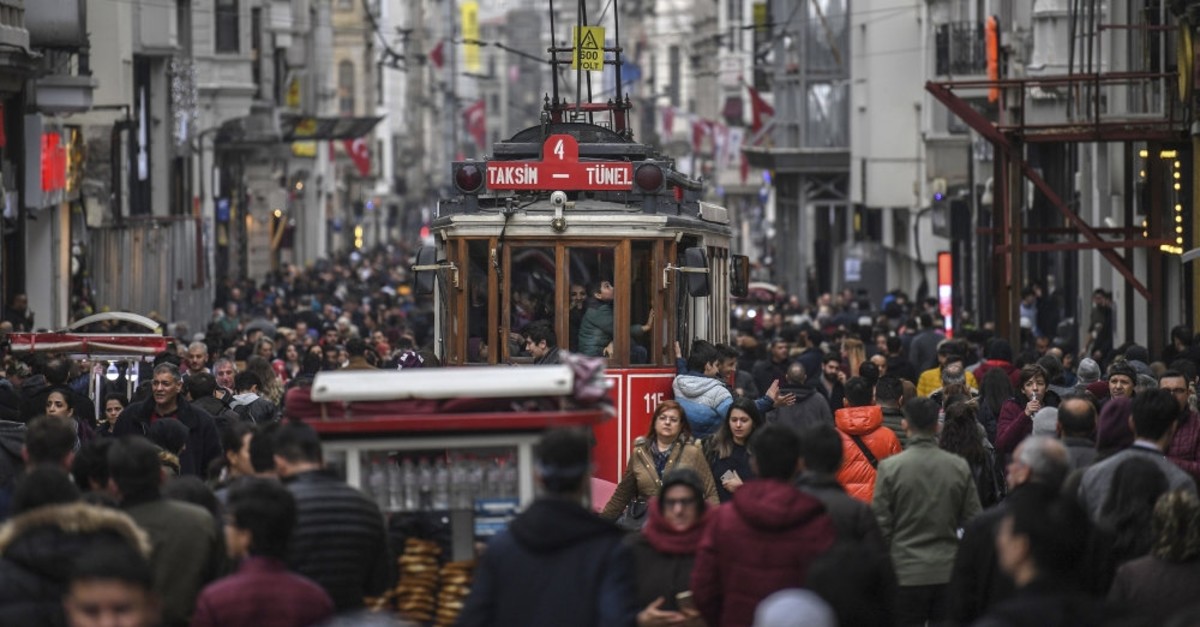 Istanbul waited 17 days for the local election results to be announced due to objections from political parties.
by Nur Özkan Erbay Apr 18, 2019 12:13 am

New proof presented by the ruling Justice and Development Party (AK Party) has strengthened allegations of organized election fraud through polling clerks in Istanbul in the March 31 local polls. Speaking at a meeting with Ankara representatives of media outlets, AK Party Deputy Chairman Ali İhsan Yavuz revealed that almost one out of three polling clerks were not selected from public servants, despite election laws stipulating that provision.

"There were 31,280 polling places in the elections. Each has one polling head and one public servant, which corresponds to 62,560, the number of total public servants should be commissioned for elections. However, it was revealed that 19,623 of them are not," Yavuz said, adding that this situation is pointing to a "complete illegality." The complete illegality of the elections requires them to be canceled and redone. The AK Party deputy chairman added that some public servants that were dismissed, suspended or retired from their duties, were also assigned as polling clerks, which is also illegal in election law. The AK Party applied to the Supreme Election Council (YSK) with its legal right to extraordinary objections to re-hold municipal elections that saw a large number of irregularities and suspicious activities, which has led to the recount of irregular votes in some districts and recounts of all votes in some other districts. 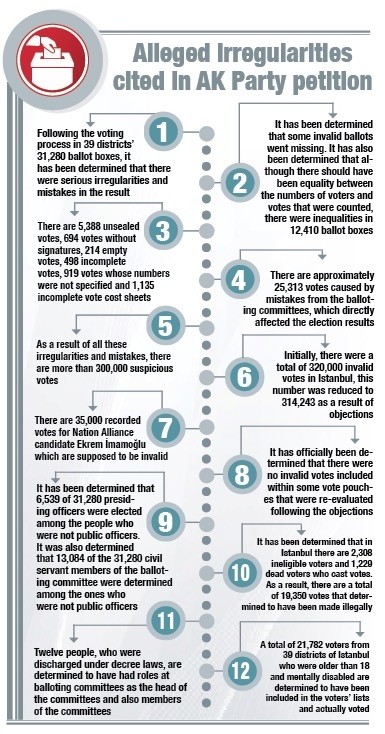 On election night, the AK Party candidate Binali Yıldırım declared victory as he was leading in the polls by a narrow margin, only to be followed by main opposition Republican People's Party (CHP) candidate Ekrem İmamoğlu's announcement of victory. The candidates' early victory statements were followed by YSK Chairman Sadi Güven's announcement on April 1, saying İmamoğlu led the polls by almost 25,000 votes according to unofficial results. The provisional election results, however, were followed by the objection process, which saw numerous irregularities and discrepancies between ballot result reports and counting tabulations. As the recounting process continues in Istanbul, the last results showed the vote difference between İmamoğlu and Yıldırım had decreased to 13,996 votes. According to Yavuz, other serious irregularities were made through unstamped ballots and counting sheets on election night. He said that as nearly 10,000 counting sheets are defective, which corresponds to one-third of the total 31,280 sheets. "The number of unstamped counting sheets is 5,388. There are also 694 unsigned, 214 blank, 498 deficient, 919 unnumbered and 1,335 partially deficient counting sheets. Is it possible to have that much [errors] in a single election?" Yavuz said.

After presenting their exposition on the alleged irregularities in vote count and voter registration processes, a group of AK Party officials, headed by Yavuz, brought the documents supporting the appeal to the YSK headquarters in capital Ankara along at 4 p.m. Tuesday. In the 44-page appeal petition, ineligible voters have an important place. The petition was built on four different categories: Irregularities in the vote count sheets; serious discrepancies between the number of registered voters and the number of voting ballots and some balloting committee chairmen and members who were not government employees as required by law; and the participation of ineligible voters in the polls.

The last item, in particular, has given way to a number of questions. According to the AK Party petition, people from "ineligible" categories, such as military personnel, deceased, convicts, drug or alcohol addicts, or the mentally ill were registered and voted in the elections.

Answering Yavuz's allegations, CHP Deputy Chairman Muharrem Erkek said the AK Party has no concrete evidence or documents required to renew the Istanbul elections. "[Ali İhsan] Yavuz, who asserted before the elections that Turkey has the safest election system in the world, again spoke today of irregularities and illegalities. But if we scrutinize his speech, we see an announcement that includes very incorrect statements made because of the trauma of election defeat," Erkek said yesterday. Stressing that the counting of invalid votes did not make any significant effect to the election results, Erkek said there will be no change even if all results would be recounted. "The YSK ordered the recounting of 57 ballots in 22 districts. All votes in these ballots were recounted. Requesting again and again for a recount would destroy election safety and democracy," he added. After AK Party's allegations on election irregularities, its election partner, the Nationalist Movement Party (MHP) also submitted an appeal for the renewal of local elections in the Istanbul and Maltepe district yesterday. Birol Gür, the head of MHP's Istanbul Party branch has submitted an application to the YSK which said that the MHP also has an extraordinary objection right for an appeal. "We submit our request for the cancellation of the elections in Istanbul and Maltepe based on absolute illegality and calls in to question election results," the application said. Yavuz also said that although he does not claim that these irregularities were organized by the CHP, it was certain that it is done to benefit the CHP.

Speaking on one of the much-debated districts of Istanbul, Büyükçekmece, Yavuz said they found serious irregularities in the district regarding the election including imaginary addresses and votes as well as forgery.

"The investigation on Büyükçekmece district continues after restricted, repetitive and irregular votes were identified. Very significant evidence was found in administrative and criminal inquiries," Yavuz said.

The AK Party insists on a do-over election since its Büyükçekmece district organization previously applied to the local election board alleging that 21,000 fake voters had been registered in the district during the process to update voters lists in the run-up to the elections.

A district registry office staffer and another person, a relative of the Büyükçekmece's longtime CHP mayor Hasan Akgün, had been arrested for irregularly registering voters by fabricating documents on behalf of Akgün. A judicial investigation launched by the Büyükçekmece Public Prosecutor's Office is ongoing, in addition to an administrative inquiry by the district. In relation to the issue, the former mayor of Istanbul Metropolitan Municipality Mevlüt Uysal said last week that in the last eight months since the June 24 presidential elections, 11,954 voters have been dropped from the voter records in Büyükçekmece, and 3,092 of those do not have any record in any place. "What does that mean? It is like their citizenship just disappeared. Those who vote for the AK Party have been erased from the list," he said.

Ineligible Voters: How did they affect the election results?

Ineligible voters have topped the agenda in Turkey's local politics over the past few weeks. The AK Party officially submitted an extraordinary objection to the YSK for the cancellation of the municipal elections in Istanbul. The petition was built on four different categories: Irregularities in the vote count sheets; serious discrepancies between the number of registered voters and the number of voting ballots and some balloting committee chairmen and members were not government employees as required by law and the participation of ineligible voters in the polls.