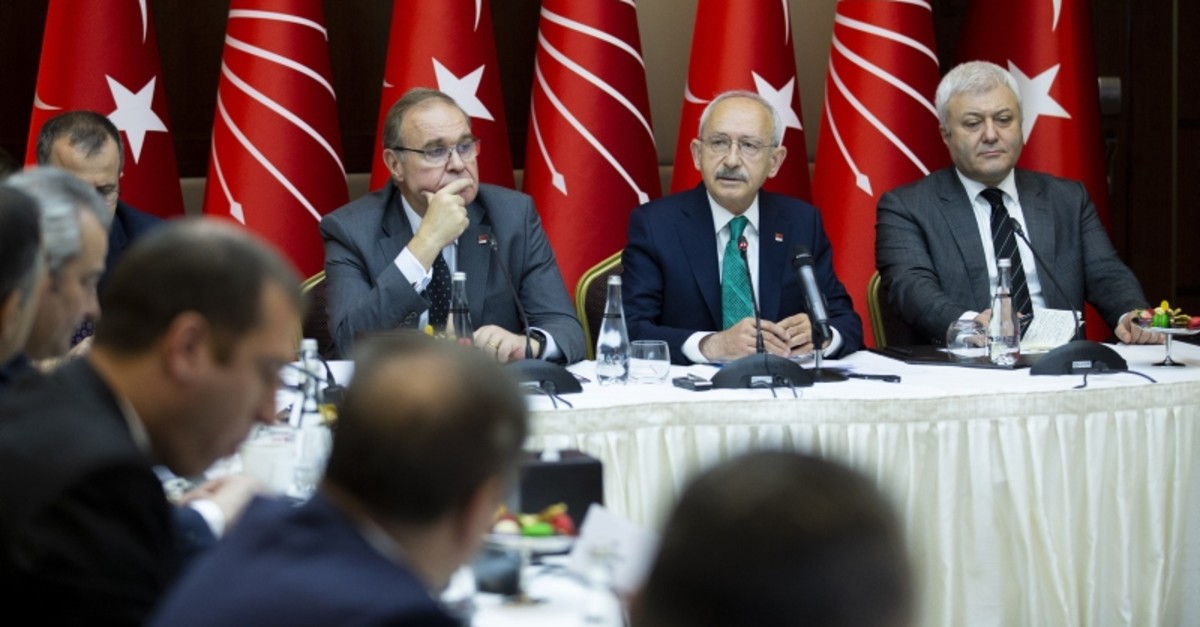 With local elections concluded, Turkey must now focus on the economy, which is its real agenda, the leader of the main opposition party said Thursday.

"How to resolve the [economic] crisis must be the main topic for politicians," Kemal Kılıçdaroğlu, leader of the opposition Republican People's Party (CHP), said in a meeting with Ankara representatives of news channels and newspapers.

Kılıçdaroğlu underlined that unemployment and inflation pose the main problems ahead, calling on for consistent economic policies and development plans. He also said the Economic and Social Council, a constitutional body including all social and economic layers of the society, should be functionalized.

He also called for democratic reforms to be initiated as soon as possible. "Turkey should do this on its free will, not based on imposition. We shouldn't do it because the EU wants or some others want it, but because we want democracy. With the government, opposition, political parties we should sit down and improve democratic standards in our country. We should do it with our own free will."

Millions of Turkish voters cast their votes nationwide on March 31 in local elections to choose mayors, city council members, and other officials for the next five years.

Reminding that the CHP carried the mayoral race large cities of Istanbul, Ankara, Antalya, Adana and Mersin, Kılıçdaroğlu said the party failed to achieve desired results in Bursa, Zonguldak and Giresun mayoral races. "Of course we don't blame the residents of Bursa, Zonguldak or Giresun. If there is a wrongdoing, it is ours. We must look back and evaluate the whole process," he said.

Kılıçdaroğlu also called on the YSK to review its decision about mayor candidates carried the elections but denied official mandates since they were expelled from public office with statutory decrees after July 15, 2016 coup attempt over links to terrorist groups. "You allowed them to run in the elections. You should hand over mandates to those who won the elections. Turkey would get rid of a democracy shame if they are given their mandates," he said.

The YSK's decision, which rules for runner-up candidates in the elections to be given the mandates, affects six mayors to be from the Peoples' Democratic Party (HDP) in the districts of Van's Edremit, Çaldıran and Tuşba, Diyarbakır's Bağlar, Erzurum's Tekman and Dağpınar township of Digor district of Kars.

Decree-laws are a part of the state of emergency declared on July 20, 2016, following a deadly coup attempt by the Gülenist Terror Group (FETÖ) that killed 251 people and injured 2,200 others. More than 130,000 public officials, many holding positions in the government and military, have been dismissed or suspended from their positions on the grounds of suspected involvement in the coup bid, affiliation with a terrorist organization and for posing a continuous threat.

According to these decree laws, persons who were dismissed from the public office directly or indirectly cannot assume public offices, cannot be readmitted to the institution they served and cannot be employed in public services, regardless of the presence of any conviction.

The PKK resumed its decades-old campaign in July 2015 after a three-year cease-fire collapsed. Since then more than 1,200 people, including security personnel and civilians, have lost their lives in PKK attacks. During the process, some HDP municipalities directly or indirectly supported these violent terrorist activities. As a result, Turkey removed the elected administrations of 94 municipalities in the region for their links to the PKK terrorist group and appointed trustees to these municipalities in 2016.

Kılıçdaroğlu noted that the decree laws were issued during the state of emergency and it is up to the judiciary to determine whether someone has the right to be elected.

"When they were denied this right, a weird outcome occurs as if their judicial processes were concluded and they lost the right to hold public office, which is not the scene in Turkey. If we are defending democracy, we have to defend the right, law, and justice not only for ourselves, but also for people who do not think like us and who are different from us," Kılıçdaroğlu said, saying it is natural for them to call on the YSK to review this ruling.

The CHP chairman also vowed to increase the minimum wage to 2,200 Turkish liras in CHP-held municipalities, which was among the party's key election promises.