Unlawfulness, usurpation of people's will can't be ignored in Istanbul polls, Erdoğan says 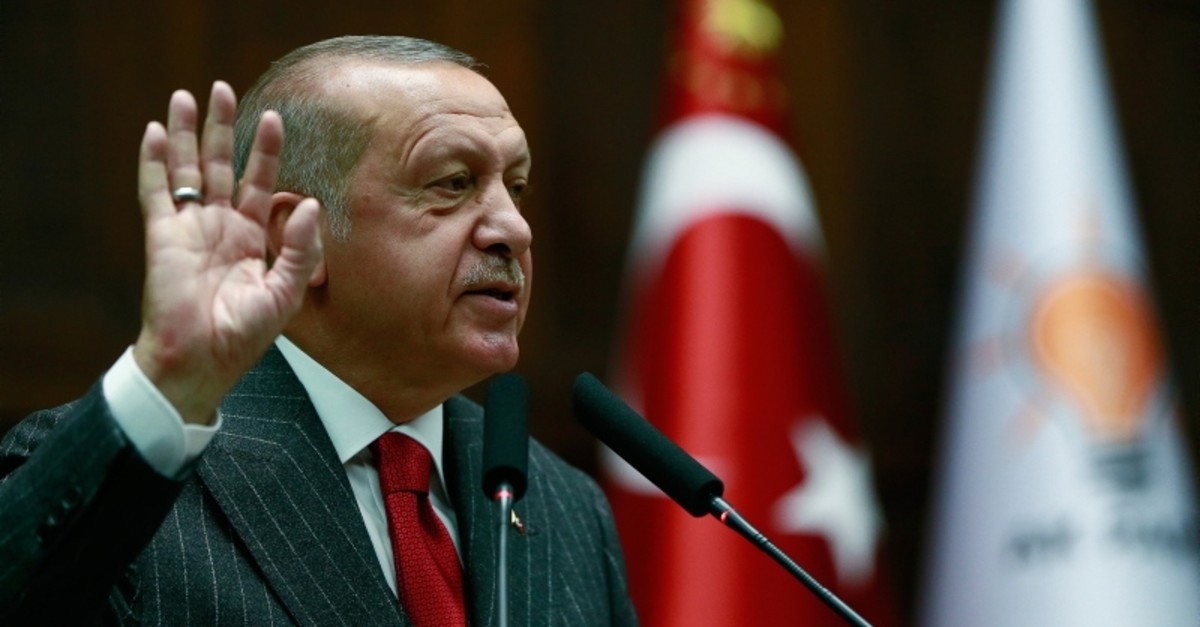 Istanbul is preparing for do-over elections as the Supreme Election Council (YSK) canceled the March 31 municipal elections in the city due to irregularities and unlawfulness.

"The will of nearly 15,000 people who voted for the AK Party has been usurped, with mistakes far greater than by any other party," President Recep Tayyip Erdoğan said Tuesday during the ruling Justice and Development Party's (AK Party) weekly parliamentary meeting where he welcomed the top election board's decision to repeat the local elections in Istanbul.

The president said irregularities and other breaches of law cast a shadow on the will of the people but that Turkey is a democracy governed by the rule of law and that his party would have respected the ruling of the YSK if they had decided to not cancel the results. He noted that the YSK's decision is an important step in strengthening Turkey's democracy.

The president noted that the documents provided as proof by the AK Party are quite solid and based on concrete evidence "that cannot be disputed," and added that they sincerely believe there was organized corruption, irregularities and utter lawlessness in the Istanbul elections.

He said if his government did not bring to account the "thieves" who stole the "national will" at the ballot box, "our people will demand an explanation from us."

Istanbul governor will act as mayor until new mayor elected

Governor Ali Yerlikaya will temporarily act as mayor until the elections are repeated on June 23.

On Monday, the YSK ruled seven against four in favor and annulled the results of the mayoral election in Istanbul. The renewed election will be held on June 23. The decision was based on unsigned result documents from the March 31 election and on some ballot box officials not being civil servants.

The top election body also decided to file a criminal complaint against the chairman and members of the district election council, election managers and other people responsible for appointing polling staff unlawfully.

The elections in Istanbul quickly became a much-debated issue, as Nation Alliance candidate Ekrem İmamoğlu was awarded the certificate of the election with a 13,729-vote difference, despite alleged irregularities. On April 17, the provincial election council handed İmamoğlu his official mandate as mayor, with a certificate confirming his victory over AK Party candidate Binali Yıldırım, a former prime minister.

According to the decision, the same candidates will compete for the mayoral race on June 23, with the exception of cases such as death or resignation.

Decision protects the interests of the people

The YSK's decision for a rerun of the local elections in Istanbul should be seen as an effort to properly reflect the will of the people, Presidency Communications Director Fahrettin Altun said.

The YSK made the decision following an objection by the ruling AK Party and invalidated results from the March 31 election over irregularities, based on bags of evidence submitted.

The evidence included proof showing the systematic distortion of voter records, the violation of laws regarding the establishment of ballot box committees and irregularities made during vote counting, Altun said.

"We are also confident that the justice system will hold accountable all individuals and organizations that violated electoral laws during this process," Altun added.

He continued by saying that all sides should take necessary precautions to prevent similar irregularities on June 23, when people will go to the polls again for a re-run of the election.

The decision was not aimed at safeguarding any party's interests, the spokesman for the AK Party said late Monday.

Speaking at a press conference at the party's headquarters, Ömer Çelik said the YSK did not announce another winner of the mayoral elections but ordered that they be re-run due to some irregularities.

"This issue is not about protecting the interests of the AK Party or another party," Çelik said.

Addressing a gathered crowd at an event late Monday in Istanbul, İmamoglu said he will meet with the head of his party and other party executives and will make the "most correct" decision. "Nobody should doubt that," he added.

"Maybe you are upset but never lose your hope," he said and added that they will surprise those who expect trouble and unpleasantness from them.

"We firmly believe that we will achieve a greater victory than March 31," the CHP also said in a statement.

Turkey's Foreign Ministry said late Monday that the decision to rerun the local elections in Istanbul was made based on the law and that everyone should respect it.

In a written statement, the ministry said the March 31 local elections were observed by a delegation from the Congress of Local and Regional Authorities of the Council of Europe, who said they were "impressed by the proficiency" of the YSK.

The statement said the YSK had assessed the appeals lodged by use of legal rights concerning various provinces and towns and had passed decisions, and while the YSK rejected some of the appeals, it decided to rerun the elections in Istanbul.

"Everyone should respect this decision that was made based on the law. We do not accept politically motivated criticism by some of our foreign interlocutors regarding this decision and the Supreme Election Council," it said.

The statement said Turkey has already proven its democratic maturity.

"The decision of the independent Supreme Election Council aims at ensuring the manifestation of the will of the electorate without any doubt," it added.

The European Union has called for the election body to produce its reasons "without delay."

"Ensuring a free, fair and transparent election process is essential to any democracy and is at the heart of the European Union's relations with Turkey," EU diplomatic chief Federica Mogherini said in a statement on Monday.

German Foreign Minister Heiko Maas yesterday criticized plans to rerun Istanbul's mayoral election as "not transparent and incomprehensible to us."

"Who holds the office of Istanbul's mayor can only be decided by the will of the Turkish voters," Maas said in a statement. "Maintaining democratic principles with transparent electoral conditions is our top priority."

Elections in Istanbul, where İmamoğlu was awarded the certificate of the election with only a 13,729-vote difference, were followed by lengthy discussions and objections by parties demanding a do-over election due to irregularities and unlawfulness.

After the elections, the AK Party submitted an extraordinary objection to the YSK for Istanbul Metropolitan Municipality, Maltepe Municipality and Büyükçekmece Municipality two weeks ago to cancel and redo the Istanbul municipal election.

According to the AK Party, there were significant discrepancies among tabulated results with wet signatures and stamps, showing the first vote record, the final record and the total number of votes submitted to the YSK. There were also empty or unsigned voting records and irregular registrations of voters.

A probe of irregularities found that dozens of members of balloting committees linked the Gülenist Terror Group (FETÖ), the group behind the 2016 defeated coup in Turkey.

Of the 43 committee members allegedly linked to FETÖ, 41 were found to be customers of Bank Asya, a FETÖ-linked bank, two were users of ByLock, the terror group's encrypted messaging app, and two were members of FETÖ-linked labor unions.