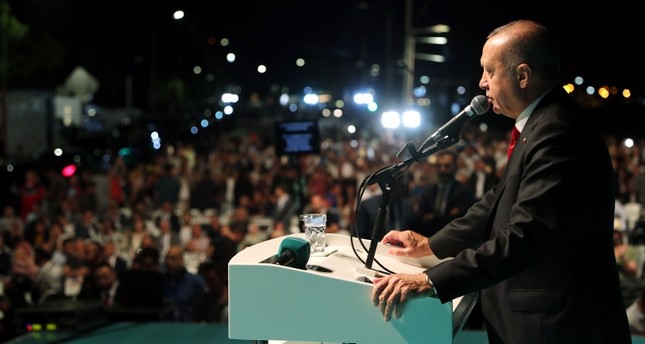 Turkey's president on Friday urged Istanbulites to flock to the polls for the do-over of the mayoral election next month, warning against plots targeting the nation.

Speaking at a fast-breaking (iftar) dinner in Istanbul's Üsküdar district, Recep Tayyip Erdoğan underlined the importance of casting votes for the do-over polls for Istanbul mayor set for June 23.

"Did you see how the West and various countries of Europe rejoiced over the person who they thought won the March 31 elections?" Erdoğan asked.

"If someone outside [Turkey] follows the outcome of these elections closer than the people of Istanbul, takes sides, rejoices, or expresses their sadness, it means there's another game going on," he added.

Rebuffing critics of the new vote, he added: "Our sole purpose in this [election] process has been to ensure that the outcome of the national will was recorded in the most accurate and healthy way."

Millions of Turkish voters cast their votes nationwide on March 31 in local elections to choose mayors, city council members, mukhtars (neighborhood officials), and members of elder councils for the next five years.

But election authorities canceled the result of the Istanbul mayoral race after the ruling Justice and Development (AK) Party and its electoral partner the Nationalist Movement Party (MHP) appealed, citing irregularities and violations of Turkish election law.

Erdoğan said that nobody has the right to criticize Turkey as it works to protect the people's will.

Turning to recent economic fluctuations, Erdoğan said that those who think Turkey's economic problems are homegrown are unaware of the large plots targeting the nation.

Share on Facebook Share on Twitter
Previous in Elections The ruling Justice and Development Party's (AK Party) Istanbul mayoral... Next in Elections The Justice Party (AP) has declared its support for Ekrem Imamoğlu,...
DAILY SABAH RECOMMENDS