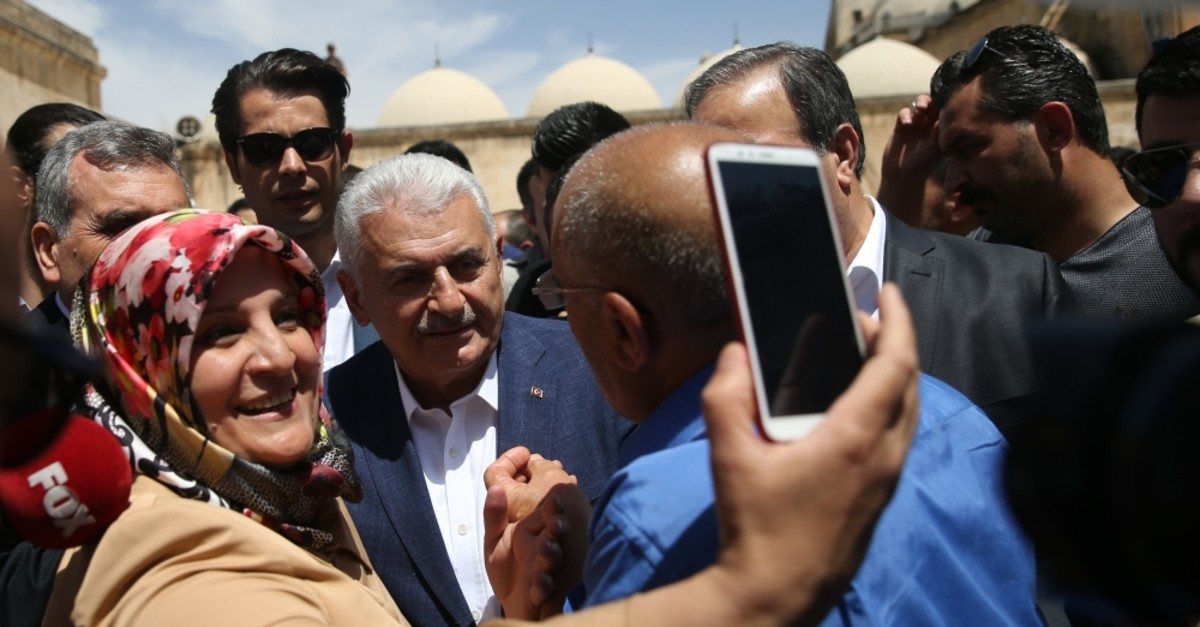 All voters in Istanbul should go to the polls to fulfill their democratic duty, President Recep Tayyip Erdoğan said Friday, underlining the importance of maximizing the turnout rate on the municipal elections on June 23. Addressing reporters Friday, Erdoğan called on Istanbul-based voters to go to the polls and underlined the importance of Istanbulities spending their summer vacation outside Istanbul returning to cast their votes in the municipal elections on June 23. Leaving the holy month of Ramadan and the Ramadan Bayram (Eid al-Fitr) behind, the People's Alliance of the ruling Justice and Development Party (AK Party) and the Nationalist Movement Party (MHP) is intensifying its efforts for the election campaign of the alliance's mayoral candidate Binali Yıldırım.

Saying that AK Party deputies and the party organization have been putting in efforts in Anatolian cities to mobilize voters to go to the polls in Istanbul, President Erdoğan said: "Our voters will fulfill their duty at the polls in Istanbul. It is very important to minimize the number of voters who do not go to the polls." Millions of Turkish voters cast their votes nationwide on March 31 in local elections to choose mayors, city council members and other officials for the next five years.

Elections in Istanbul, where Nation Alliance candidate Ekrem İmamoğlu was awarded the certificate of election with only a 13,729-vote difference, were followed by lengthy discussions and objections by parties demanding a do-over election due to irregularities and unlawfulness. The YSK ruled seven against four in favor and annulled the results of the mayoral election in Istanbul. The renewed election will be held on June 23. The YSK said its decision to annul the polls was based on unsigned result documents from the election and some ballot box officials not being civil servants.

In the March 31 elections, nearly 1.7 million voters in Istanbul did not go to the polls. Analyses show that most of the voters who did not vote on March 31 were AK Party supporters; thus, mobilization of these voters is the priority for the AK Party in its election campaign, considering a very close race between the two candidates is expected to take place again.

Istanbul, as the largest city and financial and cultural capital of the country, hosts nearly 16 million citizens. Most of its residents have their origins in Anatolian cities. It is traditional for Istanbul residents of Anatolian origins go to their hometowns during the summer. That's why political parties have concentrated their campaign strategies on Anatolian cities and have tried to mobilize this voter base to go to the polls in Istanbul.

As two weeks remain for the upcoming rerun mayoral elections in Istanbul, Binali Yıldırım has been traveling across the Anatolia within the context of his election campaign.

Speaking in Turkey's southeastern Diyarbakır on Thursday, Yıldırım called on Istanbul-based citizens spending their bayram holiday in Diyarbakır to return to Istanbul, stating that Istanbul needs them.

Reminding the AK Party's initiatives to increase rights and freedom of citizens of Kurdish background, Yıldırım said: "Kurds are the first-class citizens of this country." Turkey has been transitioning through a democratization period since the early years of AK Party's time in office with a series of reforms made to increase the rights and freedoms of Kurds. Later, steps were taken in what was called the reconciliation process in 2013, an attempt to bring PKK terrorism to an end through a series of moves, including talks with the PKK's imprisoned leader Abdullah Öcalan, and a cease-fire by the PKK. However, it was brought to an end in July 2015, when the PKK unilaterally ended the cease-fire.

Also slamming the PKK terrorist group, Yıldırım said: "We won't allow those who want to destroy our unity and solidarity." Touching upon the PKK's urban warfare strategy targeting Turkey's southeastern cities during his term as the prime minister, Yıldırım said: "Unfortunately, the PKK burned, destroyed and dug trenches here. Many of our people lost their lives," and added that those who provoked what is known as the Kobani protests, in response to the clashes between the YPG and Daesh in Syria's Ayn-al Arab, cost the lives of innocent people and harmed the unity of nation. Stating that the state did not surrender the terrorism, Yıldırım said that the state took all necessary measures against the terrorism and recovered all the damage caused by the PKK.

The Oct. 6-7 Kobani protests were another memorable period involving the PKK. In 2014, 34 civilians and two police officers were killed, and 221 civilians and 139 police officers were wounded in clashes with pro-PKK the Peoples' Democratic Party (HDP) protesters and the conservative Free Cause Party (HÜDA-PAR) followers in southeastern Turkey, in addition to clashes pro-PKK protesters and police in large cities in western Turkey.

The PKK's death toll kept growing when the terrorist group adopted an urban warfare strategy to carve out enclaves within Turkish territory while using the local population as human shields, using the experience obtained by their Syrian offshoot the People's Protection Units (YPG) during the civil war in Syria. Municipalities run by the HDP helped the terrorists in various towns and cities dig trenches and erect barricades, which were manned by local sympathizers and youth. Mainly deployed in the southeastern Diyarbakır, Şırnak and Mardin provinces, this strategy led to the destruction of entire neighborhoods in clashes, with the most damage inflicted on Şırnak's city center and in the districts of Sur, Cizre and Nusaybin.

However, the strategy collapsed because of successful anti-terror operations and the lack of cooperation from the people in the region. The cities suffered significant damage during the operations. Since then, the government has invested huge amounts of money to recover infrastructure and public services in the region. Intense reconstruction efforts in the southeastern region were budgeted in the billions and include housing, health and education projects as well as restoration processes for historical buildings, mosques and churches and recreation work.

Meanwhile, AK Party deputy Numan Kurtulmuş criticized the CHP for its close affiliation with the hdp.

Adressing party members in the Black Sea province of Ordu, "If you receive support from the HDP and the PKK, you should declare it honestly," Kurtulmuş said.

In May, the senior leader of the PKK openly declared the terrorist group's support for Imamoğlu in the rerun elections.

Bese Hozat, the co-chair of the PKK's umbrella organization the Kurdish Communities Union (KCK), told the terrorist group's media outlet, the Fırat News Agency (ANF), that the HDP will support the "anti-fascist bloc against the fascist bloc."

"Whichever candidate positions themselves against fascism in Istanbul, be it Ekrem

İmamoğlu or another candidate, we will support them," Hozat said.

She also described the People's Alliance – formed by the AK Party and the MHP and supported by more than half of the country – as a "fascist government," saying that "the Kurds" will support whoever is running against that bloc in Istanbul.

Previously, İmamoğlu also praised former HDP Co-chairman Selahattin Demirtaş, saying that his peaceful and universal discourse may be an opportunity for the country and may pull down the walls. Demirtaş was arrested in November 2016 for terrorist propaganda.

The HDP did not field candidates for the elections on March 31 for a majority of mayoral posts in areas apart from the predominantly Kurdish eastern and southeastern parts of Turkey, calling on its voter base to support other opposition candidates. The party declared support for İmamoğlu on Thursday for the renewed elections on June 23.