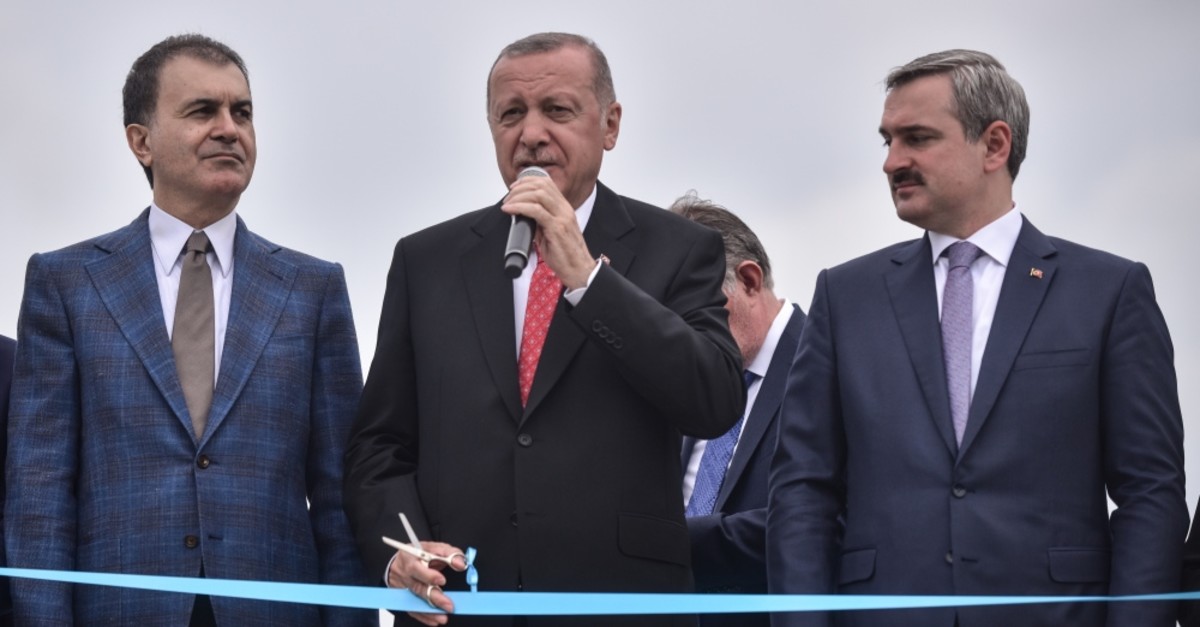 "If he tells so many lies before becoming mayor of Istanbul, insulting everyone, what would he do if he is elected mayor," Erdoğan said in a collective opening ceremony in Istanbul's Sancaktepe district.

The People's Republican Party (CHP) candidate allegedly insulted the governor of northern Ordu province after the governor did not let him make an entrance from the VIP gate of the airport. After revealing camera footage, İmamoğlu said that his words were misheard, while supporters of the ruling Justice and Development Party (AK Party) urged him to apologize for his behavior. Speaking about announcements by foreign countries regarding the election, Erdoğan called on them to refrain from getting involved in the voting process. "Why are foreign countries so interested in who will govern Istanbul? Are we interested in people ruling London, Berlin, Paris, Vienna, Amsterdam or Brussels?" he asked. The president also criticized İmamoğlu for meeting the moderator of Sunday's televised debate before the program. "The moderator met the CHP candidate. They talked about the questions. How he will ask, and how he [İmamoğlu] will answer. It is not ethical," Erdoğan said. Two prominent candidates, İmamoğlu and the AK Party's Yıldırım, running to become the commercial capital's mayor, met Sunday in the first televised political debate in years, with each of them aiming to attract undecided voters. Stressing that the AK Party rendered Istanbul one of the major metropolises in the world, Erdoğan said the party would continue to serve people if its candidate, Yıldırım, is elected in Sunday's election.

"We transformed Istanbul into one of the most important metropolises in the world, which once was piled up with garbage and suffered from dirtiness and air pollution," he said. Meanwhile, President Erdoğan yesterday attended a joint radio program that was broadcast by 15 national and 200 local radio channels. In the program, Erdoğan discussed the rerun Istanbul mayoral elections.

Before the beginning of the AK Party period in Istanbul, Turkey's commercial and cultural capital had been ruled by the conservative Welfare Party (RP) and later for 10 years by the Virtue Party (FP), which was the continuation of the RP after it was shut down. Erdoğan, then a member of the RP, became Istanbul mayor in the 1994 local elections after the tenure of Nurettin Sözen from the center-left Social Democratic People's Party (SHP). Erdoğan also criticized populist rhetoric, saying that Turkey wasted its most precious years due to such policies in the past. "We explained our projects, preparations and what we did in the past. There is no place for empty pledges, lies and slander in our politics," the president said.