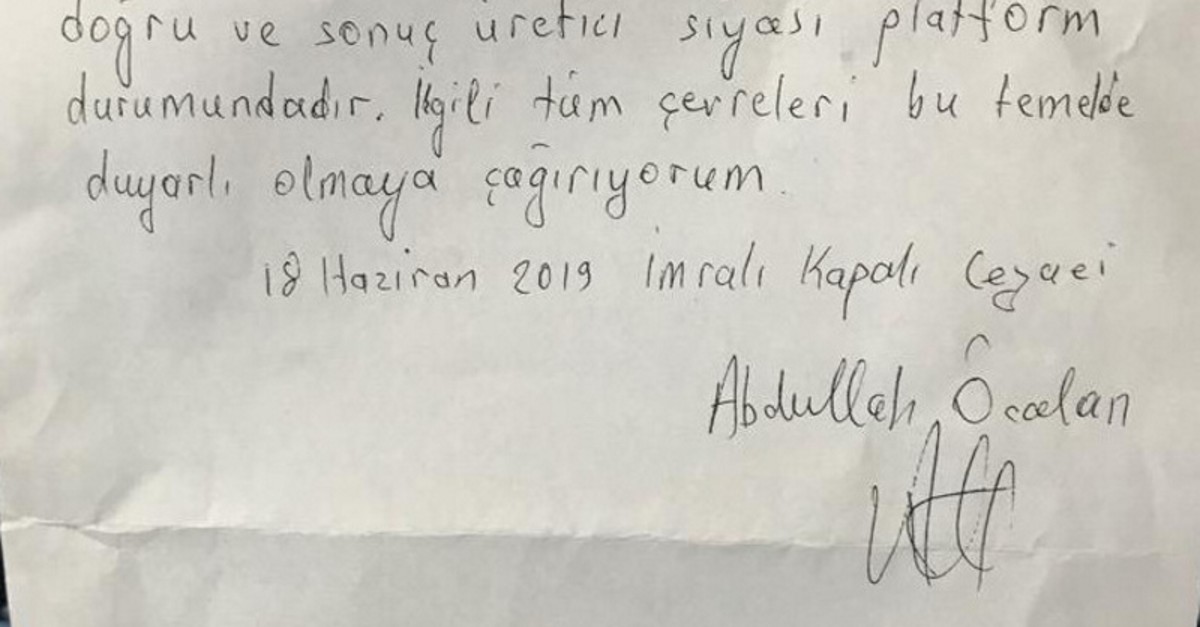 Abdullah Öcalan, the jailed leader of the PKK terrorist group, called on pro-PKK People's Democratic Party (HDP) not to side with any other party in the Istanbul mayoral election rerun on Sunday.

Öcalan made the statement in a letter that was shared with members of the press Thursday by academic Ali Kemal Özcan.

According to Özcan, Öcalan wrote the letter and gave it to his lawyers Tuesday, but they "hid" it from the public.

"The conception of democratic alliance embodied in the HDP should not be party to the current electoral debate," Öcalan wrote.

"The importance of the democratic alliance is that it does not engage itself in dilemmas and insists on its neutral stance in elections," he added.

The HDP said Friday that its strategy of supporting the opposition in the Istanbul mayoral election has not changed despite Öcalan's call.

The HDP co-leaders said in a written statement that Öcalan's statement was in line with the HDP's strategy until now, and claimed that President Recep Tayyip Erdoğan was seeking to pit the HDP and Öcalan against each other.

Speaking in an interview late Thursday, Erdoğan had said that there is a leadership struggle between Öcalan, PKK's leadership cadres in Iraq's Qandil Mountains and former HDP Co-Chairman Selahattin Demirtaş, who was arrested in Nov. 2016 over terror charges.

The March 31 elections in Istanbul, where Imamoğlu was awarded the certificate of election with only a 13,729-vote difference, were followed by lengthy discussions and objections by parties demanding a do-over election due to irregularities and unlawfulness. The Supreme Election Council (YSK) ruled seven against four in favor and annulled the results of the mayoral election in Istanbul. The YSK said its decision to annul the polls was based on unsigned result documents from the election and some ballot box officials not being civil servants.

The HDP decided in January not to nominate mayoral candidates for seven major municipalities, including Istanbul.

In recent years, HDP mayors and local officials have been found to misuse funds in support of the PKK terrorist group, provide jobs to PKK sympathizers. Investigations by the Justice Department have led to dozens of mayors and local officials' removal from their posts and, in some cases, criminal charges being brought against them by the court. HDP municipalities and their staff were also found to be actively participating in terror attacks launched after July 2015, when the reconciliation period launched in 2012 ended.

70-year-old Öcalan, who founded the PKK in 1978, was captured in 1999 and sentenced to death penalty due to his role in the terrorist group's decades-long campaign against the Turkish state, which led to the deaths of more than 40,000 people.

After the abolishment of the death penalty in Turkey in 2002, Öcalan's sentence was commuted to life imprisonment. He is being held in a high-security prison on İmralı Island in the Sea of Marmara.