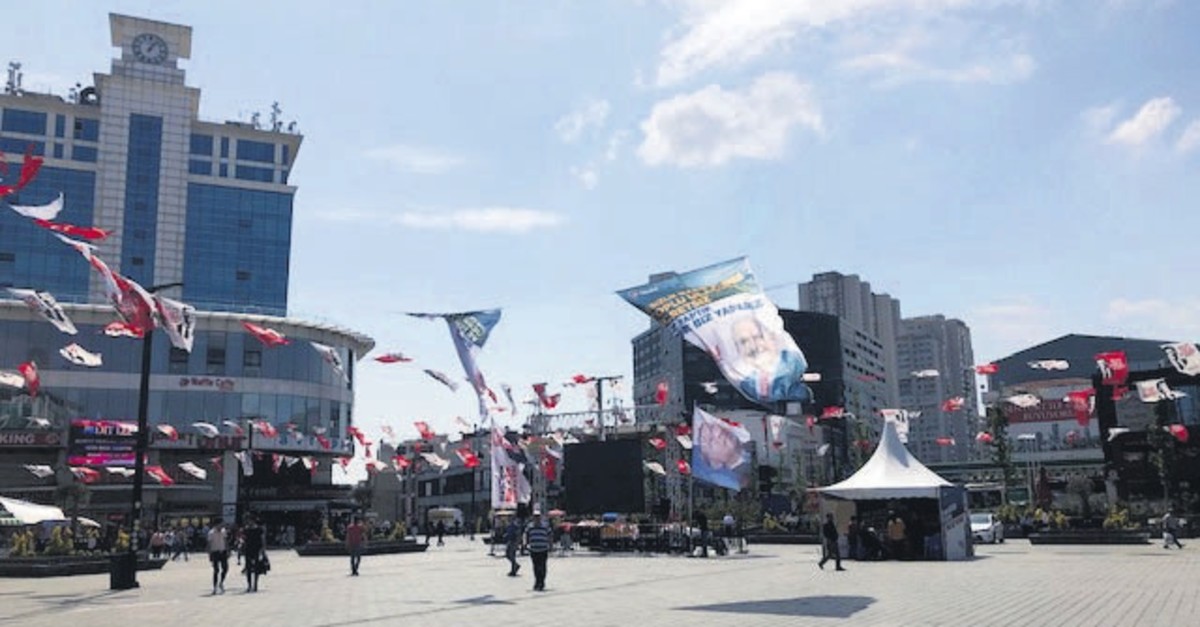 With Istanbul's mayoral elections quickly approaching, employment and discomfort with Syrian refugees emerge as key issues for the residents of Esenyurt, a district with significant Kurdish and refugee populations

The sun was shining above us, causing major heat to touch us deeply when we, as Daily Sabah, stepped into the Esenyurt district of Istanbul, where the election atmosphere can be felt to the core with only a few days left until the big event.

Covered with the campaign tents and songs of the two main candidates of the June 23 Istanbul Metropolitan Municipality elections, the main square of Esenyurt, a district known for its significant Kurdish and refugee population with relatively lower socio-economical standards, was welcoming us with a variety of people of every age, most of whom were looking for shade to sit down and kill time. Although the people seemed to be quite peaceful at first glance, their minds were actually occupied with major problems, from unemployment to Syrian refugees, revealing the reality of the district.

As first time visitors to the district, we immediately were attracted to a crowd under a huge and apparently quite old tree. There were a bunch of middle-aged and elderly men who were sitting under the tree's shade in the middle of a work day, chatting and doing nothing else basically. When we approached them, they showed immediate interest and eagerness to talk, curious to see what we were doing there. As we started to ask our questions, the situation gained a chaotic nature as they preferred to respond all together, making us unable to understand who said what.

Yet, one thing was apparent: They were all complaining about unemployment and a lack of income.

"Everything is a problem," said 53-year-old İsmet. "The retired are suffering, the workers are suffering. We cannot find any jobs; we don't have money in our pockets. The only thing we hear about is elections but no one comes up with concrete solutions to these problems."

Fifty-five-year-old Kemal also complained about the same issue as his retirement income was not enough to feed his family.

"I've been getting TL 1,400 per month and have to feed a family of seven. How is this supposed to work, seriously?" he asked.

"Still," he added, "May God not let us be needy to the support of others."

"I'm not sure what to do with my limited money. Should I support my daughter who is going to high-school? Should I pay my rent? I'm 68 years old and these are my current problems," Muhyittin, yet another man under the tree, added.

Esenyurt is known for its mainly Kurdish demographics that are also quite influential in determining election results in the district. In the 2014 local elections, the ruling Justice and Development Party (AK Party) received 47 percent of the votes and won the elections while main opposition Republican People's Party (CHP) received only 34.6 percent of the votes. 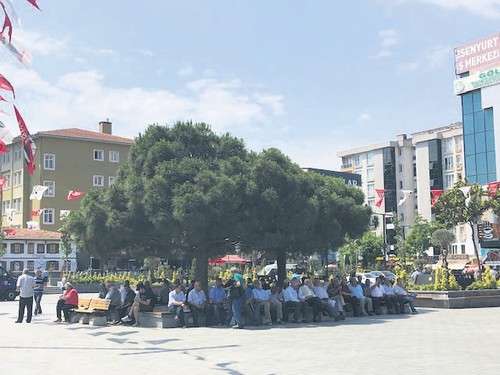 The reason behind the increase in votes for the main opposition was interpreted by many as the shift in the Kurdish voters, who previously voted for the Peoples' Democratic Party (HDP).

The HDP received 10.1 percent of the votes in the district back in 2014. On March 31, however, the HDP decided to support the CHP, transferring its voters' base to the opposition.

When they were asked what their expectations from the next mayor were, however, they all responded together, saying that they only "hope for the best."

Among them, there was a one voice that was distinguishable from the others. It was the voice of İsmet, who was saying, "I only want the Syrians to go back, that's all."

Syrian refugees being scapegoat for everything

İsmet's reproach was not the only one in Esenyurt, a district known for its major refugee population.

"Syrians are a major issue in here," said 33-year-old Muhammed, a young man who has also been suffering from unemployment.

"They are the reason why rents are so high right now," he claimed.

He also added that he has been suffering from low income and has to live upon the support of others.

However, it was surprising to see that his only expectation from the metropolitan municipality mayor was to send the refugees back, despite his obvious struggle with the unemployment and low income.

Turkey is home to more than 3.5 million Syrian refugees under temporary protection status along with some 72,000 others, who were granted Turkish nationality. Istanbul has the largest number of refugees in Turkey with almost 560,000.

Esenyurt also hosts a large number of refugees, more than most of Istanbul's other districts. According to a 2017 report, the district, with its more than 740,000 residents, is home to almost 30,000 refugees.

While we were wandering around, with lots of question in mind regarding the relations of Esenyurt residents with Syrian refugees, we came across the municipality's White Table truck and decided to pay a visit under the cover of a regular Esenyurt resident.

Talking to an official who was working on the truck, we expressed our troubles with an imaginary Syrian neighbor and expressed our "discomfort" with the refugee population.

Listening to our so-called trouble carefully, the official informed us on the refugee community, ensuring us that they were not the reason behind our problems regarding the payment of rent and unemployment. H e said that it is his duty to clear out misinformation regarding refugees. When we said that it was our first time seeing such a truck that provides services for the people, he informed us regarding the services of the White Table. Stating that the White Table was established in 1994 when President Recep Tayyip Erdoğan was the mayor of the commercial capital to be a bridge between the municipality and the people, he said that they are providing truck services in 27 districts currently, moving to different locations within the districts each day.

According to 38 years old Servet, the reason why there are economic problems is the fact that there are elections, which, he claims, cause a slowdown in the market.

"Our biggest problem is the elections. It reflects on businesses. Besides, the politicians are visiting door to door during the election time. However, when the elections are over, they are going missing as well," he said. 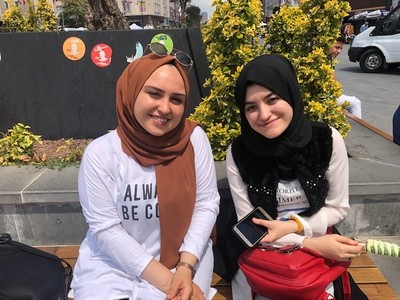 Politicians fail in reaching out people

A 50 years old woman who was sitting on a bench comfortably and enjoying her day but refused to give us her name, also brought up the lack of politicians' visit, saying that they were not reaching out to her as a citizen. "However," she said, "I already know what's right and wrong. So, I do not need to be informed about anything. I want Binali to win, I believe that he will provide us whatever we need, unlike İmamoğlu."

Two young girls, 20 years old Yasemin and 19 years old Zehra were also on the same page as the women with no name. "I do not think that as people, we are being listened by the politicians. However, in my opinion, transportation is the biggest issue in Istanbul. I'm having trouble when go from somewhere to another place and I believe that Binali Yıldırım can solve this problem. That's why I'm going to vote for him," Yasemin said, while Zehra was nodding her head, agreeing with her. When they were asked about life in Esenyurt, they both made a weary face. "It's not good," said Zehra. "I do not like the lifestyle here. However, I don't think that this is about the municipality. I think this is about people," Yasemin clarified.