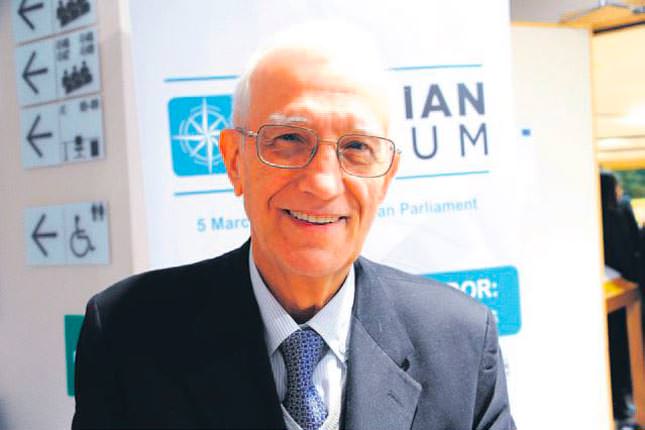 by daily sabah Mar 08, 2014 12:00 am
Istanbul - As tension increased with Russian military intervention in Crimea, so did the worry about the shutting down of the valves of natural gas reaching Europe.

According to European deputy Vittorio Prodi, the situation in which the European Union (EU) finds itself today regarding Ukraine is not only about energy security. "It is a matter of independence," said Prodi. "The independence of the EU will be ensured by the Southern Corridor Gas Project, in which Turkey is a main actor."

The deepening political crisis occurred simultaneously with a worry about sufficient supplies of natural gas reaching Europe. Many observers say the reason the EU cannot intervene in Crimea is the bloc's dependence on Russian gas.

In an interview with Sabah, Prodi noted that the incident in Ukraine put Europe's energy problem front and center. "The EU is desperately in need of Russian gas," he lamented. He described the Southern Gas Corridor as one of the most promising and important alternative solutions. Prodi said he hopes the increased interdependence because of energy will bring Turkey and the EU closer.

"In that way, Turkey and Europe will be sharing the same energy infrastructure," said Prodi. The Southern Gas Corridor Project envisions gas from the Shah Deniz field in Azerbaijan being transmitted to Europe through Turkey. The Shah Deniz gas field has a reserve of 1.2 trillion cubic meters. Other energy fields in Azerbaijan, Turkmenistan, Israel, Iraq and even Iran could eventually be linked to the pipeline.

Prodi stressed that with Russia using energy as a trump card, Europe's need for alternative sources becomes even more urgent. He referred to the United States, whose development of shale gas reduced dependence on foreign sources of oil. "Alternative gas sources are supposed to be regarded as sine qua non for Europe,"

Prodi explained. "South Stream is a very concrete alternative and an important potential source with fewer political implications. We are not content with Russia using the natural gas for political maneuvering. According to another rumor, Ukraine has significant shale gas reserves, in which Russia is interested. Energy interests come up to be even more prominent than human rights and political situations in other countries."

Prodi also commented on criticisms implying that the EU has a negative attitude toward Turkey and stressed that troubles in Turkey may emerge in all countries from time to time. "That kind of risk applies for all countries, not just Turkey," he said. "What is important to me is that we try to keep the accession process of Turkey alive. Hence, we want to show that Islam can adapt to modern democracy."

Representing Turkey in the summit, Vice General Director of the Petroleum Pipeline Corporation İbrahim Arinç said he does not expect Russia to cut Europe off from its gas. "Russian companies continued to sell electricity
even during the Georgia war," said Arinç.
RELATED TOPICS