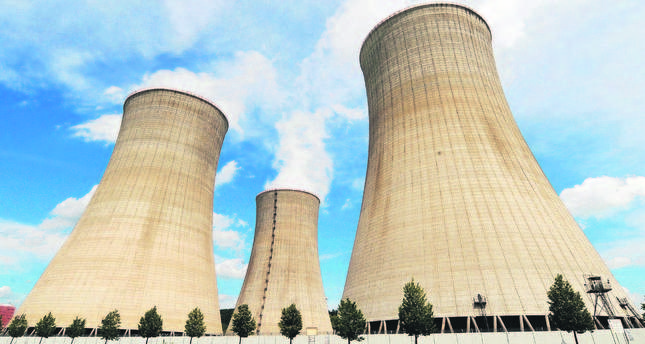 ANKARA – In 2010, Turkey signed intergovernmental cooperation agreement with Russia to build Turkey's first nuclear power plant (NPP) at Akkuyu. Turkey's decision was widely criticized by environmentalists and nuclear experts because of allegations that Russia's nuclear technology is old and has safety vulnerabilities.

Moreover, after the Fukishima incident, sector experts expected stagnation in the nuclear sector. However, developments since then show safety will be of paramount importance during the construction and running of the plant.

Despite these concerns, Russia's stateowned nuclear company, Rosatom, plans to build power plants with the latest safety features around the world. Last year, the company concluded a record number of transactions for construction of NPPs.

Rosatom will build NPPs in countries such as Finland, Belarus, Bangladesh, Jordan and India and is also seeking agreements with the U.K., China and South Africa.

Rosatom's recently signed agreements in various countries may be interpreted as the company having convinced the world about the reliability and safety of its nuclear technologies. However, the business climate when Turkey and Russia signed the intergovernmental cooperation agreement to build the NPP in 2010 is opposite of what it is today. "This is about foresight," Turkish Energy Minister Taner Yıldız said when answering a question regarding how the government decided to cooperate with Russia to build the NPP.

"Building an NPP is serious business. We spent a significant amount of time and did extensive research when we decided to cooperate with Russia in 2010. Moreover, this is about foresight. As a result of our extensive studies on this issue, we were convinced that Russian technology is good enough and that Rosatom is capable of cooperation. We knew that Russia was not going to use only its own technology either four years ago or now. Building NPPs are comprehensive projects that consist of thousands of different parts. Therefore, in the later stages of construction, we will see that Rosatom will cooperate with companies from various countries."

Likewise, Rosatom Vice President Ivan Dybov asserted that the company's technology is safe. "Russian state corporation Rosatom builds [Voda Voda Energo Reactor] VVER reactors," said Dybov. "The VVER reactor is a pressurized-water nuclear power reactor with a pressure vessel, working with thermal neutrons. It is used for production of thermal energy released by fission of nuclear nuclei in fuel. The equipment of the reactor circuit is intended for dry, saturated steam production for turbine generators where the thermal energy of steam transforms into electrical energy, and 67 power units with VVER reactors have been constructed since the 1960s."

Dybov said there are VVER reactors in operation at 18 NPPs in Russia, Ukraine, Armenia, Finland, Bulgaria, Hungary, Czech Republic, Slovakia, Iran and China. "These include 23 VVER-440 units with a total power of 10,120 MW and 31 VVER-1000 units with a total power of 29,000 MW," said Dybov. "Sixteen units with VVER reactors have been commissioned since 1991. The total number of failure-free hours of operation for VVER reactor technology exceeds 1,500 years. As opposed to other technologies, the construction of VVER-type reactors has not been interrupted in the last 20 years. The placing of individual units into operation has continuously followed one after another. All reactors designed in Russia, including 37 VVER units operating outside Russia, have successfully passed stress tests.
Among those are 18 VVER units in five EU countries."

Independent nuclear expert Alexander Uvarov shared similar sentiments. "The Russian company offers its customers new reactors that are innovative in terms of security," said Uvarov. "For example, passive safety systems in the VVER-1200 reactor used in the NPP-2006 plant can guarantee that the so-called Fukushima scenario in Japan will never happen again."