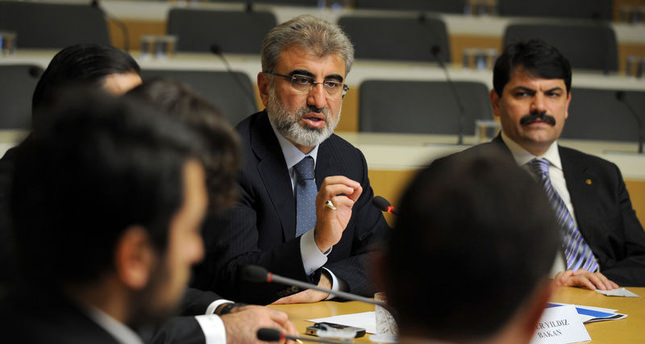 ANKARA — After stability-reassuring local elections were held on March 30, the Turkish government is set to concentrate on huge energy investments and the privatization of coal fields around which coalfired power plants will be erected.

Speaking at a meeting in the capital, Ankara, on Tuesday, Yıldız said the energy sector in Turkey should have a bigger growth rate than average economic growth in order to achieve higher energy security.

Authorities said negotiations are ongoing with Saudi Arabian, Qatari and Japanese companies for the privatization of the Afşin-Elbistan and Konya Karapınar coal sites, which will bring an investment of $20 billion (TL 43 billion) and employ more than 10,000 people.

"These are large and long-term projects which reflect confidence in political stability. Although not mentioned in the meetings, foreign investors wanted to see the results of the elections. International investors and official authorities may sign the agreement in one or two months," said officials from the Ministry of Energy.

The elections results will also accelerate ongoing energy agreements with northern Iraq. Officials from the Ministry of Energy noted that Turkey will start to export the oil mandatorily stored in Ceyhan for more than three months because of the disagreement between the Kurdish Regional Government (KRG) and Baghdad on oil revenue sharing, whether or not KRG and Baghdad compromise. Yıldız also noted that nearly 1.3 million barrels of oil are already stored in Ceyhan and added, "Our storage capacity is 2.5 million barrels. We will reach the limit amount by mid-April and start to export if no deals are closed between Irbil and Baghdad."

Once export commences, it is expected that the daily amount of petroleum from northern Iraq exported through Turkey will reach 400,000 barrels per a day by the end of this year. Senior executives from Turkish state-owned Halkbank, which was chosen by the Turkish government as the destination for the oil revenue, say the bank is ready for the oil and natural gas revenue that will reach $90 billion to $100 billion in the long run. This will allow Turkey to take an important step toward being an energy finance center.

Another energy investment on the list is the Afşin-Elbistan coal-fired power plant. After TAQA of the United Arab Emirates withdrew its offer over political reasons last year, negotiations with Qatar Holding accelerated. Once an agreement is finalized, the Afşin-Elbistan power plant will be erected near the coal field to be operated by the same company. The total investment in the Afşin-Elibistan field will reach $10 billion to $12 billion and 8,000 megawatts of electricity is expected to be generated. Authorities from the Ministry of Energy noted negotiations are also being held with Japanese companies. In another coal yard of Turkey, Konya Karapınar, a 5,000 megawatt power plant will be built with an investment of $7 billion to $8 billion. Joint Enterprise Group of Slovak HPP, Thai Singa and Saudi Acwa Group are on the table for negotiations for the plant.