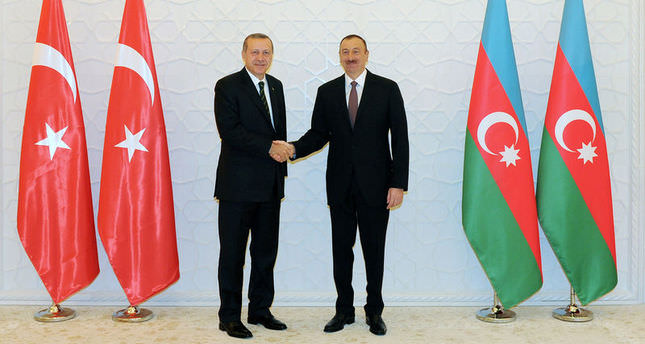 BAKÜ — On his first foreign visit after last Sunday's local elections, Prime Minister Recep Tayyip Erdoğan meets with Azerbaijani President İlham Aliyev and both reiterate their commitment to the Trans Anatolia Natural Gas Pipeline Project (TANAP), which aims to fulfill both Turkey and Europe's energy needs. The leaders said they are aiming to begin the building of the pipeline by the end of the year and start transporting gas in 2018.

In the meeting, Erdoğan stressed that both governments should take urgent steps to confront the movement and prevent it from spoiling cooperation between Turkey and Azerbaijan. Aliyev confirmed that the Azerbaijani government is conducting an investigation into the illegal Gülenist structure in his country. In a press conference following the meeting, Erdoğan stated that the two countries would never let anyone harm their relations.

During the bilateral discussion between the two leaders, Erdoğan brought a file to the table focusing on Gülenists who infiltrated large joint projects. As sources noted, the leaders agreed to take steps against those infiltrators who could threaten such crucial and costly projects. Both leaders acknowledged their confidence in one another and the importance of close relations between Turkey and Azerbaijan.

Emphasizing the significance of the Trans-Anatolia Pipeline (TANAP), Erdoğan said Turkey is doing its share of the project and is launching the expropriation program of the fields through which the pipeline will pass.

Experts say the TANAP, which is a multi-dimensional project, has various significances for Turkey and Azerbaijan.

Emphasizing the magnitude of the project, experts note Turkey and Azerbaijan are attempting to build TANAP in a period during which governments are tightening their belts all around the world. "We will firmly preserve our attitude toward the Nagorno-Karabakh issue, which we have had up to now," said Erdoğan. "We will never make concessions on this point. I, once again, want especially the ones watching their TVs to know that. "

Azerbaijani president İlham Aliyev was asked about the Gülen Movement. Aliyev replied that many issues in a wide range were discussed in the meeting. "We will never allow anything to harm our relations, even in the least," said Aliyev. "We stand by each other in every matter. We will support each other in both good and bad times. This is what brotherhood requires."