Turkish 'eco-city' will be heated by pistachio shells 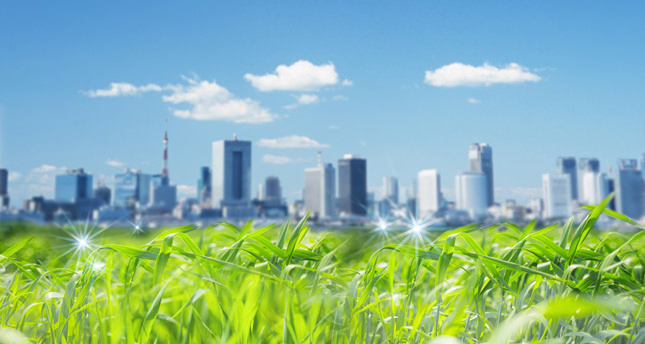 by AA Apr 17, 2014 12:00 am
GAZIANTEP — Turkey to build its first ecological city where public buildings could be heated by burning pistachio shells, the abundant local product in the country's southern Antep region.

The ambitious project will be founded within five years in a 3,200-hectare area between Gaziantep and Kilis province on Turkey's border with Syria.

French environmental engineering firm Burgeap discovered in December 2013 that Antep pistachio shells – with its 19.26 calorific value per kilo – are the most feasible local energy source in the province.

Burgeap now claims that this caloriferic value is considerable, and would be enough to provide heating and cooling for 55 hectares of public buildings.

A final report on the project's viability is to be presented to the Gaziantep Metropolitan Municipality next month.

According to the UN Food and Agriculture Organization, Turkey ranks third in the world for Antep pistachio production. This type of pistachio takes its name from Gaziantep; the city's original name was Antep but the Turkish parliament bestowed the name Gazi '(War Veteran)' on the era during the country's 1920s independence struggle.

Tekerekoglu said the local authorities will examine the French firms' report before deciding whether to go ahead with the project, which would then be scheduled for completion within 12 months with a budget of 600,000 euros.

Gaziantep also hosts an experimental ecological house which is pursuing a number of international awards.

Pipes laid underground circulate fresh air in the house, helping to cool it in the summer and heat it in the winter by taking advantage of the earth's temperature.

"The Earth's temperature is three degrees cooler in the summer and warmer in the winter. But increasing or decreasing the temperature by one degree causes seven percent energy waste, which means our house makes a 21 percent energy saving through using these air pipes," Tekerekoglu claimed.

The house also produces its own electricity through the photovoltaic panels placed in the yard, leading to an surplus production of power.

The house also saves energy by purifying gray water and collecting rainwater. The grey water purifying system sends the waste water to reservoirs, while rain waters are collected and used to irrigate the yard.

The ecologic house with its integrated power generation, heating, cooling, airing, waste water management systems provide a model for those who want to buy land and build in the planned Ecologic City.

Right after it was built, it applied for recognition from the Germany's Passive House Institute, an independent research body that has played an crucial role in the development of houses with minimum carbon emissions and energy consumption.

PHI distributes the only internationally recognized certificate for performance-based energy standard in construction.

When built, the ecologic house also applied to U.S. Green Building Council's LEED Platinum certificate, which is the most widely recognized and used green building program across the globe.

Tekerekoglu said the project was confident of expecting to receive both the LEED Platinium and German Passive House certification.

Asked about the possibly high cost of building ecologic houses, Tekerekoglu said, such systems pay for themselves in energy savings within around five years.

These projects are becoming increasingly important in Turkey; the country imports around 75 percent of its energy according to 2012 data from the Turkish Statistical Institute.

Data has suggested that individuals can save 50 to 70 percent energy by applying ecologic systems in their houses, corresponding to an annual saving of between $5-6 billion nationwide.

Despite years of warnings against burning natural resources for energy, this remote Turkish city is proving that by burning its most abundant crop it is leading the way in environmental awareness and green technology.