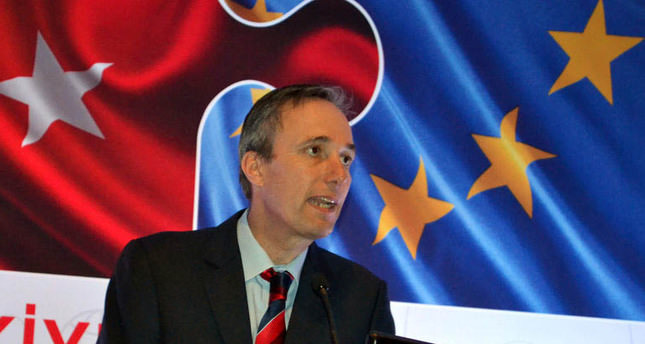 by AA Apr 26, 2014 12:00 am
ISTANBUL — Turkey has a good chance to become an energy hub if it keeps the historical achievements it made in the last decade, Martin Raiser, country director for Turkey of the World Bank, said on Friday.

"Turkey has taken major steps in the past decade and nearly half of them was to implement independent regulatory institutions for strengthening the rule of law to improve business opportunities," Raiser told Anadolu Agency during the International Energy and Environment Fair and Conference in Istanbul.

Raiser said: "It is very important for the government to restore the confidence that the investors have in quality of the regulatory framework and the independence of the regulatory agencies, whether it is EMRA (Energy Market Regulatory Authority) in energy sector, or BRSA (Bank Regulation and Supervision Agency) in banking sector, or Central Bank in monetary policy."

"These are absolutely critical achievements that Turkey has had, and shouldn't give up. For the regulated energy sector, it is particularly important that everyone believes that regulatory agencies are independent and is not subject to political influence and takes even arms-length decisions with regard to market participants."

Turkey, dependent on energy imports with limited natural sources, introduced EMRA in 2001 as an independent regulatory body to oversee oil, gas, electricity and other markets within the energy sector. Turkey, in need of foreign direct investment, tries to boost liberalization in energy market for attracting investors. Turkey has seen an invesment of 75 billion dollars in energy sector since the founding of EMRA in 2001, according to unofficial figures obtained from Turkey's energy ministry.

The World Bank is currenty working with Turkey's energy ministry to reform the legislation of the natural gas market, which might allow Turkey to attract competing sources of supply for its domestic market and ultimately make it better positioned to supply for European markets.

Turkey is in a strategic geographical location "between major markets in Europe and major supply sources in further east," said Raiser.

He said this geostrategic advantage increases Turkey's chances to become a global energy hub, adding that Turkey's geopolitical context require resolving some of the political issues around energy resources in the Eastern Mediterranean basin and Iraq.

As a part of its bid to become an energy hub, Turkey invested in TANAP, Trans Anatolia Natural Gas Pipeline, to carry Azerbaijani gas to Europe. The recent discoveries of natural gas fields in Eastern Mediterranean off the coast of Israel introduced an opportunity for Ankara as Turkey is the best feasible route for Israeli gas to reach European and Asian markets.

The strained relations between Ankara and Tel Aviv over Mavi Marmara incident in 2009 are expected to thaw as both sides signal possible reconciliation. Turkey also tries to meditate a resolution in Iraq between federal government and Kurdish Administration of Northern Iraq, which will allow Kurdish oil to reach Turkey for re-export.
Last Update: Apr 27, 2014 2:22 pm
RELATED TOPICS