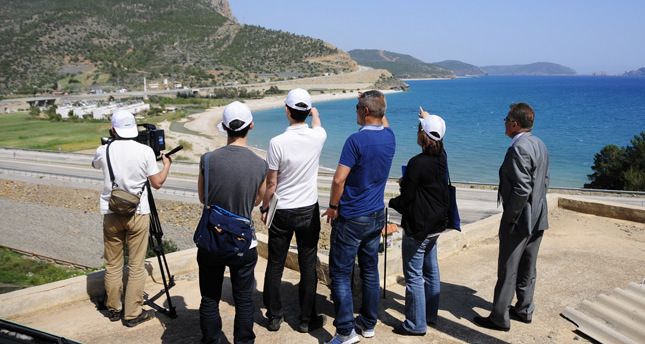 by AA Apr 27, 2014 12:00 am
ISTANBUL — If they entered into service by now, Turkey's two prospective nuclear power plants could help the country reduce its energy import bill by $7.2 billion in addition to generating 32 percent of its electricity, a Turkish nuclear energy official said on Saturday.

"Turkey's demand for electricity increases as its population grows. Turkey needs nuclear energy to meet this ever-growing demand," Necati Yamac, head of the nuclear energy department in Turkey's energy ministry, said during the International Energy and Environment Fair and Conference (ICCI 2014) in Istanbul.

Turkey's electricity demand in 2023 is expected to be around 500 billion kWh a year, which is currently around 239 billion kWh. Turkey generates 46 percent of its electricity from natural gas, 98 percent of which comes from imports. This nearly doubles the global average of 25% percent use of natural gas in a power generation.

In addition to power generation, the prospective Akkuyu nuclear power plant will create 20,000 jobs during its construction period and it will provide employment for 7,000 people in course of its operation with an expected lifecycle of 60 years, said Yamac.

Despite the security concerns raised following the 2011 Fukushima Daichi nuclear disaster in Japan, construction of 72 nuclear power plants around the world is still in progress. 435 nuclear power plants in 31 countries are in use and an addition of 237 is expected to come on line by 2030.

Quality and security are the significant points for the construction of the Akkuyu plant as quality expectation and administration are highly related with safety, said Beril Tugrul, the head of the nuclear research department of Istanbul Technical University.

Tugrul said that Nuclear Quality Standard Association (NQSA), which promotes and gives recommendations to companies, could play an active role in this period.

In a bid to diversify its energy sources, Turkey, heavily dependent on energy imports, invested in a nuclear power plant near Akkuyu in the southern province of Mersin, which will be built in cooperation with Rosatom, Russia's state-owned nuclear energy company. The power plant is expected to become operational by 2020. Turkey also has plans to build a second nuclear plant in the port city of Sinop on the Black Sea coast with a Franco-Japanese consortium, and a third in the north-western Kirklareli district with domestic funding and engineers.