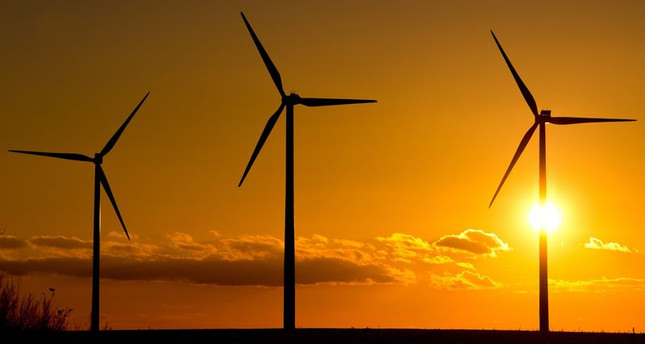 by AA
Apr 27, 2014 12:00 am
ISTANBUL — The EU Commission's 2030 renewable energy target is weak and more ambitious goals should be set, according to Christian Haellmigk, an energy law expert at international law firm CMS Hasche Sigle.

Haellmigk spoke on Saturday about the European Union's 2030 energy goals and problems at the 20th International Energy and Environment Fair and Conference in Istanbul, whose main media sponsor is Anadolu Agency.

Haellmigk said EU's climate and energy goals would be legislated by October 2014, and summarized them as "202020 Formula", which means 20 percent reduction in greenhouse emissions, 20 percent increase in renewable sources (RES) and energy efficiency by 2020.

He said the EU as a whole had already met the 2020 criteria, but 2030 goals were a matter of controversy among the European Comission, the European Parliament and member states.

Debate: RES goal binding for all, or not?

Haellmigk said there was an EU-wide agreement on reducing greenhouse emissions by 40 percent by 2030 as the commission proposed. Regarding energy efficiency, the commission has not proposed a new target so far but the European Parliament proposes at least 40 percent increase.

"But the real controversy is on RES target," he said, and explained: "The commission says the 2030 target for RES is to increase EU-wide capacity by 27 percent, which is not binding for individual states. However the parliament says the target is 30 percent, and binding for all states."

He said member states also had reservations, and added, "While some want national targets, others want the EU targets to be binding for all."

"Germany, for instance, has already much higher investments in renewable sources, and we want to increase it more since we will quit nuclear power," he noted.

Therefore, he said, Germany wants the targets to be binding for all, and added: "Personally, if we get higher rates of RES, we can export this to other countries. That is why we want other countries to be forced to have higher rates."