Northern Iraq's oil to be marketed on May 2 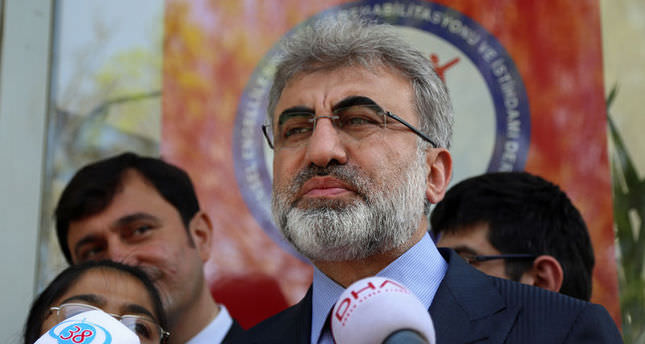 by AA May 01, 2014 12:00 am
OSLO — Northern Iraqi oil stored in Turkey may begin to be sold in May, Turkey's Energy Minister Taner Yıldız said Tuesday. Kurdish Regional Government (KRG) Prime Minister Nechervan Barzani announced on Wednesday that Irbil will begin to export oil via Turkey on May 2. "Turkey believes that oil sales will contribute to solving domestic Iraqi problems," Minister Yıldız said while on an official visit to Norway.

Yıldız said Turkey is not currently a customer for Kurdish oil but acts as an energy conduit for its transport to Europe and beyond. Iraq has become the biggest supplier of oil to Turkey, exporting 7 million tons of oil to the Turkish market.


"Iraq switched places with Iran in terms of volume after sanctions on Iranian oil," said Yıldız. "The exports figures rose significantly from a previous level of 4 million tons...and we did not demand any price discount for Iraqi oil."

Turkey's energy minister, Taner Yıldız, has recently remarked several times that Turkey stores a great deal of the KRG's oil at the Ceyhan Port, which is on the verge of exceeding the storage limit of Turkey. The minister emphasized that whether or not the KRG and Baghdad governments compromise, Turkey will market KRG oil in two months despite strong objection from Baghdad. Turkey seeks greater cooperation with Norway on energy Turkey's Minister of Energy Taner Yıldız said on Tuesday that Ankara views Norway as a potential partner to diversify its natural gas supply. Yıldız attended a press conference with Norwegian Oil and Energy Minister Tord Lien during his official visit to Norway where he said that Turkey and Norway have cooperated for 10 years in the energy sector.

He added that both countries resemble each other closely and share many of the same challenges, including needing to diversify their energy sources. Speaking during a press conference Yıldız stressed that some Norwegian oil companies have remarkable experience in open sea oil exploration."We made offers to the Norwegian companies and spoke with them about the open exploration fields on the Black Sea and Mediterranean Sea.

Also, we noted during the meetings that we can increase the amount of the liquefied natural gas we are buying to 6 billion cubic meters.
Norwegian authorities will discuss our demand and convey their decision to us in short time," Yıldız said. He added that Turkey is in favor of long-term cooperation with Norway.

During the press conference Yıldız stressed that in addition to tapping into more domestic sources, Turkey want to ensure its energy security by increasing the number of countries it purchases natural gas from, to eight from five.