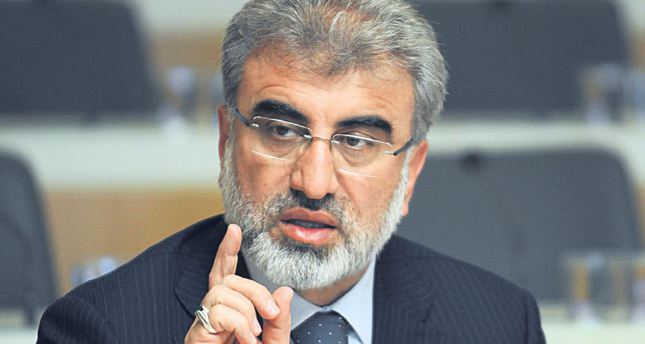 Any attempt to cut gas to Ukraine would hurt Turkey's imports, notes Energy Minister Yıldız, adding that Turkey's ties with Moscow precluded one side from doing anything that would harm the other

TBLISI, Georgia — Speaking on Wednesday in the Georgian capital Tblisi, Turkey's Energy Minister Taner Yıldız touched on numerous issues, including natural gas imports from Russia, electricity production and oil transfers from the Kurdish Regional Government (KRG). In response to a question regarding the Ukrainian crisis and its possible effects on Turkey's natural gas imports from Russia, Yıldız stated that Turkey will not be negatively affected by the current conflict over Ukraine. "It is said that the IMF will provide loans to Ukraine to cover its debts to Russia stemming from natural gas imports. Moreover, European Union countries stand behind Ukraine and support it financially. That is why we do not expect any disruption in natural gas transfers from Russia," the minister said. Yıldız also said that in the event Russia imposes natural gas sanctions on Ukraine, Turkey will view it as sanctions being imposed against Turkey."

We believe that deep-scaled interstate relations between Turkey and Russia will prevent such a mistake. Russia would not want to be devoid of the revenue it gets from Turkey provided by natural gas exports, which totals about $11 billion (TL 22.9 billion) annually, and Turkey does not want to be faced with a cut in its natural gas supply," he concluded.

İbrahim Palaz, a veteran energy expert at the Hazar Institute of Energy spoke to Daily Sabah regarding the energy minister's statements. "Turkey imports more than 50 billion cubic meters of natural gas annually. Almost 25 percent of Turkey's total natural gas imports are supplied by the pipeline passing through Ukraine, Romania and Bulgaria. That means in the event Russia [imposes] natural gas sanctions against Ukraine, Turkey will have to find new sources to cover its energy needs which will be around 10 billion cubic meters," Palaz noted. Turkey currently exports natural gas from Iran, Azerbaijan, Algeria and Norway, and Palaz said none of those suppliers can import more natural gas to Turkey at an amount sufficient to meet the country's needs. "Turkey generates about 50 percent of its electricity using natural gas. Add to that the drought Turkey has been experiencing for five months, which will badly affect hydroelectric production and Turkey is expected to consume more natural gas to produce electricity. Considering all these factors, Yıldız's statements are quite accurate," he concluded.

Economist and energy expert Dr. Cemil Ertem spoke to Daily Sabah on the issue. He noted that Turkish minister defended Turkey's interests. "Turkey does not want to be faced with an energy status-quo change in the region unless it finishes huge energy projects like the TANAP and South Stream pipelines.

Moreover, Turkey is aiming to prevent Russia's expansion plans in the region. Because the next step of the Russian government may be Georgia, which has a particularly important role in Turkey's energy plans. In this manner, Yıldız's statements in Tblisi means a lot," he said. Apart from natural gas issues, Yıldız said northern Iraqi oil has not yet been exported to international markets. "Oil in the region belongs to Iraq, and our Iraqi brothers will present the oil to the international market," Yıldız said, adding that Turkey's role would be to transfer oil when the Iraqis assent to it being put on the market. "[Over] 2 million barrels of oil are currently stored [in Turkey's Ceyhan Port] and 100,000 barrels of crude oil flows there every day. I think [they will stop transmitting the oil] in 3-4 days [if it cannot be put on the market]. If Iraq transmits, we will transfer and sell their oil to international markets." The tanks at the Ceyhan port, located in the southern province of Adana on the Mediterranean coast, have a storage capacity of 2.5 million barrels of crude oil, which flows via the Kirkuk-Ceyhan Oil Pipeline.

Yıldız stated that Turkey's oil-refining company, the Turkish Petroleum Refineries Corporation, could buy crude oil from Iraq if needed, but that it is not necessary now.

Questioned about the privatization of Iraq's oil pipelines, Yıldız said that Turkey was concerned about the issue, adding, "We will share details in the upcoming period." Iraq wants to privatize the whole oil sector in the country, including the pipelines.

In November 2013, Turkish and Kurdish regional administration officials signed an agreement that enabled Kurdish oil to flow from Kirkuk to the port of Ceyhan on Turkey's southeastern Mediterranean coast. Meanwhile, Turkey will reduce electricity imports from Georgia this year, Yıldız said, adding that Turkey and Georgia occasionally export and import electricity mutually.