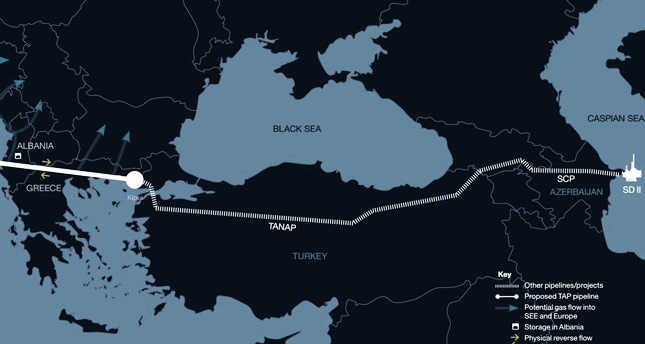 by AA May 08, 2014 12:00 am
ANKARA — The Southern Gas Corridor project, which will supply Europe with gas from Azerbaijan when it opens in five years time, will also have the capacity to carry extra gas from northern Iraq, Turkmenistan and possibly Iran, which would reduce Europe's dependency on Russian energy, according to an energy expert.

David Koranyi, acting director of Dinu Patriciu Eurasia Center, which is part of the U.S. Atlantic Council think tank, told that the Southern Gas Corridor is a future multi-source "superhighway" that could bring gas not just from the Caspian sea, to an increasingly energy dependent Europe.

The Southern Corridor has the potential to incorporate natural gas from the eastern Mediterranean, as well as Iraq, and perhaps even Iran which holds the world's second largest gas reserves, Koranyi said. However, the geopolitical and commercial challenges are daunting in Iran, he added.

The cost of the project is estimated to be around US$45 billion.

Responding to a question on the crisis in Ukraine, Koranyi said Russia is also dependent on Europe as its main market, especially for natural gas. "This co-dependence limits the room for maneuver for each," Koranyi added.

The US cannot directly help Europe with gas supplies in the short term, said Koranyi and underlined that US liquefied natural gas (LNG) won't come online until 2015/2016.

However, in the medium-term, allowing unrestricted US LNG exports to Europe would be a great contribution to overall efforts to diversify away from Russian supplies, Koranyi said.

"The price points in Asian markets are currently far more attractive," Koranyi explained, however he added that, "Simply by increasing liquidity on the global LNG markets, the United States could further improve European energy positions by enhancing the negotiating power of the buyers, especially those in Central Europe and the Baltic still exposed to a single supplier."