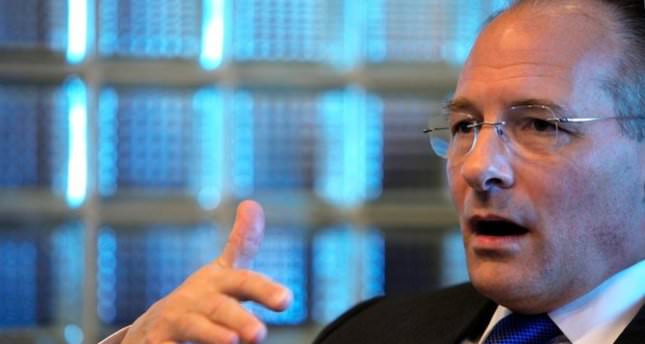 by Daily Sabah May 13, 2014 12:00 am
ISTANBUL — The U.S. Ambassador to Greek Cyprus, John Koenig, said yesterday that the country should trust Turkey more than they have previously, in order to help complete natural gas projects. Speaking to the Greek Cypriot press, Koenig highlighted the incidents in Ukraine and the fact that Russia uses the natural gas as a political weapon. "We firmly believe that the energy sources of Europe should be changed," said the American. "One of the ways to change those sources is the pipeline that will pass through Cyprus and Turkey.

Thus, dependency on Russia in energy sources can be reduced." The ambassador advised the Greek Cypriots to trust Turkey more and stated that the natural gas in the Greek Exclusive Economic Zone can be transferred across Turkey."

This will help you in terms of your geopolitical perspectives and the future stability of the island", said Koenig. The U.S. Ambassador expressed the transfer cannot be made before the resolution of the Cypriot problem. He stressed that now is the time to negotiate with Turkey if such a prospect is intended within the framework of cooperation with Turkey.

Koenig sought to emphasize the point saying the project could not be made under the current political circumstances, urging Turkish and Greek Cypriots to come to a resolution. Cyprus-Turkey line is also shown as an available pipeline route for the natural gas transportation which has been extracted by Israel in Leviathan field in East Mediterranean.

The number of unexpected applicants for gas diplomacy in the eastern Mediterranean is rising at an accelerated pace after Israel apologized to Turkey and agreed to pay compensation for the 2010 Mavi Marmara incident and a new resolution process was initiated in Cyprus between Turkish and Greek Cyprus. Following Israel's request for offers from prominent energy companies such as Çalık Holding, Turcas and Enka, Sabancı Holding also joined in the tender.

Turcas announced it entered into a partnership with Sabancı Holding and EnerjiSA, part of giant German energy company E-on, for the transportation and distribution of eastern Mediterranean natural gas. Transport of the natural gas in Israel's Tamar and Leviathan areas through pipelines is planned for the first stage. In the medium term, the addition of Cypriot gas to the route, which is the most plausible option to move the gas, is also planned.

The consortium envisages that nearly 8 to 10 billion cubic meters of gas will be transported to Turkey annually through the yet-to-be built pipeline. Negotiations with companies began for the price and consumption of the gas. The cost of the pipeline is estimated to be about $1.5-2 billion (TL 3-4 billion). Turcas wants to move ahead of its competitors by building a strong supply chain, following the transmission of the gas to Turkey. EnerjiSA, which has a gas power plant of nearly 1,300 megawatts, is among the biggest natural gas consumers. The company also plans to build a new gas plant of 500 megawatts in the medium term.
RELATED TOPICS