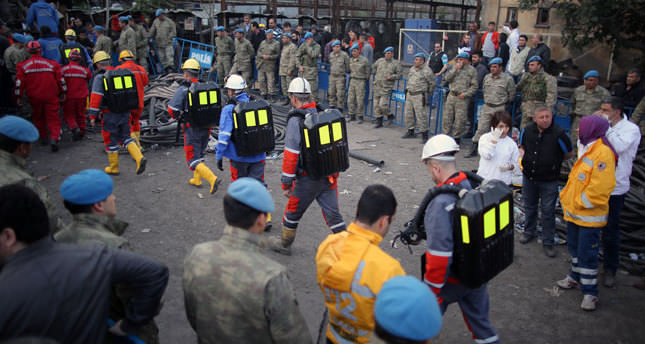 by AA May 15, 2014 12:00 am
ISATNBUL — The Soma district in Manisa, has an important role in national energy production, as it is home to the second-largest coal reserve in Turkey after Zonguldak, a western Black Sea province. Some 15,000 employees work in eight mining companies in total around the Soma district. Secretary-General of the Trade Union of Mineworkers Vedat Ünal said many coal mines once run by Turkish Coal Enterprises (TKİ) have been privatized, leading to increased production.

There are 12,000 mineworkers in the province who are union members. In total 15,000 families depend on the mining work in the province, which is believed to have 600 million tons of reserves and an annual mining production total of about 10 million tons. Not all the workers at the Soma mine are from the region. Some are from Balıkesir and Kütahya, which are provinces close to the Soma district. He stressed that the rate of employmentalso rapidly increased with new mines put into service. The region of Eynez where Soma Coal Enterprises Inc. operates also features one of the most productive coal mines in the district. The Eynez field has a reserve of 15 million tons and an annual production capacity of 2.5 million tons.

According to various media outlets, 5,000 workers, engineers and specialists are employed in the exploded coal mine. According to the information on the website of the Soma Coal Enterprises Inc., which has been blocked to access by the company itself, the company nearly tripled the amount of production in six months compared with the production of state-run period.

Another striking detail about the accident is that the company decided to shut down another mine after an accident on Oct. 20, 2013 in Darkale, which left one worker dead and 22 others injured. The workers who became unemployed after the decision started to work in mines in Eynez. Executives of Soma Coal Enterprises Inc. made a statement after the accident in October and announced that 250 unemployed people started to work under their company and they would prioritize other unemployed workers as well.
Last Update: May 15, 2014 1:02 am
RELATED TOPICS