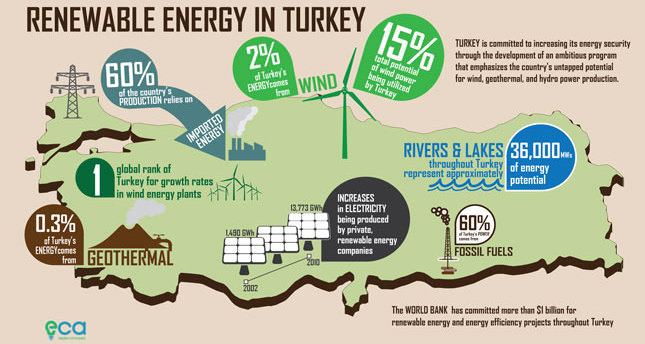 by AA May 19, 2014 12:00 am
ISTANBUL — The EU's bid to diversify its energy sources and guarantee supply security could bring about the opening of the 15th "chapter" of EU's accession policy area on energy, currently being blocked by the Greek Cypriots, in Turkey's accession process, say experts. Turkey has to successfully conclude negotiations on 35 policy "chapters," which require reforms and the adoption of European standards, for its EU membership.

Since 2005 Turkey has been in negotiations on 13 of these policy areas and back in November 2013, following three years of deadlock, negotiations began on chapter 22, covering regional policy after Germany lifted its block following a positive progress report in October 2013.

A spokesperson for EU Energy Commissioner Günther Oettinger said, "The commission has been considering for years that Turkey is sufficiently prepared to start negotiations on the energy chapter," adding, "In our view the chapter could be opened and the commission has repeatedly expressed this view in public. However, all 28 EU member states need to agree on this unanimously, and so far this has not been possible."

The spokesperson continued saying that the problem with the opening of this chapter is the unresolved issue of Cyprus. According to Samuel Doveri Vesterbye, an expert on Turkey at the Canada-based BBA consulting and engineering firm and board member of the pro-EU-Turkey dialogue group Young Friends of Turkey, "France has changed its position vis-à-vis Turkey, as can be seen with the opening of chapter 22.

Secondly, the situation in Cyprus is changing quickly. This is a result of increased U.S. pressure on the island, while Turkish, EU, local players as well as private companies are pushing for more meetings and negotiations." Carlos Stagnaro, research director at the Italybased free marketeering think tank Istituto Bruno Leoni, said, "Both parties would benefit from market integration and more efficient use of energy assets on either side."

There is also a large scope for cooperation on energy security insofar as Turkey is a key transit country for natural gas from the EU's point of view, and Europe is the most important end market for natural gas going through Turkey, Stagnaro noted. Meanwhile, Peter Stano, spokesperson for the EU's top enlargement official, Štefan Füle, explained that for the period 2014-2020 the objectives are to "improve Turkey's interconnectivity and integration with European electricity and gas markets.

Speaking to the Daily Sabah, İbrahim Palaz, veteran energy expert at the Hazar Energy Institute, noted that the European Union is in need of Turkey's cooperation when it comes to energy security. "European authorities come up with chronic Cyprus issues when Turkey wants to discuss a new chapter. However, EU countries now see that they cannot provide their energy security without newlyexplored east Mediterranean and Caspian natural gas reserves, which are unfeasible to the market unless Turkey becomes part of the transformation," Palaz said. He added that the EU's recent maneuver about the opening of the energy chapter cannot be read without Russia's annexation of Ukraine. "EU countries want to decrease their dependency on Russia's natural gas. For this reason, they take into consideration every alternative. I believe the EU's view on the Cyprus issue will shift with the latest developments," he concluded.

Economist and energy expert Dr. Cemil Ertem commented on the issue. He emphasized that Turkey and the EU have never been this close to a solution in the Cyprus issue. "The EU has to restructure its policies toward Turkey and Cyprus. To provide their energy security, they need a stable political and economic environment in the Mediterranean basin," Ertem said. The Cyprus dispute is an ongoing conflict on the Mediterranean island of Cyprus between the population of Greek Cypriots and Turkish Cypriots, as well as between their respective states, the Greek Cypriot-controlled Republic of Cyprus and the Turkish Cypriot-controlled Turkish Republic of Northern Cyprus (recognized only by Turkey). The EU accepted Greek Cyprus as a member in 2004 and highlighted that Cyprus represents the whole island. Turkey harshly criticized both, and reconciliation of the island's politics came to a dead end. Untapped natural gas reserves around the island have added a new dimension to the discussion.
Last Update: May 19, 2014 1:17 am
RELATED TOPICS