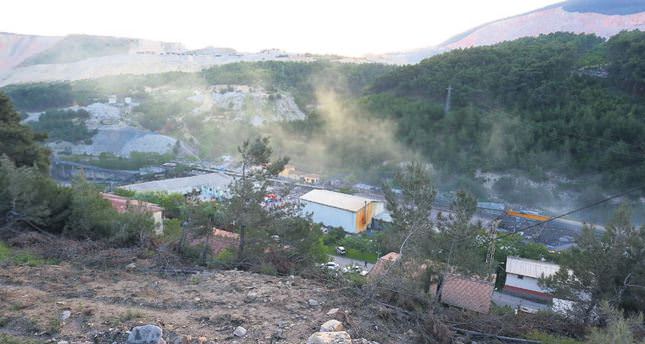 by Daily Sabah May 20, 2014 12:00 am
ISTANBUL — After a grieving coal mine accident in the Eynez region, in Soma, a district in western Turkey, which killed 301 miners, mines operated by Soma Holding in Atabacası and Işıklar regions will be investigated. Soma Holding runs two more coal mines in Soma. According to officials from the ministry of energy and ministry of labor and social security, state authorities will conduct a survey focusing on the occupational safety, ventilation and gas tracking systems in those two mines. Morever, it is alleged that Soma Holding will withdraw its investments in Zonguldak, a Black Sea province in Turkey known for its large coal reserves.

Company officials noted that Soma Holding possesses the royalty of the areas in Zonguldak for 36 years and they invested $200 million there, where more than 3,000 miners and engineers were expected to be employed. Experts emphasize that safety measures of the mines in Atabacası and Işıklar regions are even lower than the one in Eynez.

While the Soma Inc. is preparing for a new era, the state started to take financial and social steps aimed at binding wounds ın the aftermath of the accident.

The Turkish state declared an emergency action plan for the families of 301 miners who died in the Soma coal mine tragedy.

The procedures regarding healthcare service, temporary disability benefit, permanent disability benefit, survivor's pension, pensions for unmarried daughters of deceased and funeral aid are expedited with the order of Prime Minister Recep Tayyip Erdoğan. In accordance with the regulation promulgated after the 2011 Van Earthquake, which left 604 dead, the relatives of deceased miners with a 30-day premium will be offered survivor's pension.

The disabled miners will also receive disability pension. The officials from the Social Security Institution (SGK) are visiting the families in Soma to inform them about their social security rights. A total of TL 415 will be allocated for funeral expenses. A comprehensive compensation plan is also under progress. An upcoming regulation will include the families of deceased miners who were approaching retirement. The compensation given by the SGK will be recoursed to the employer in line with the proportion of the employer's fault.

According to the reports published by labor inspectors, SOMA Holding shall be obliged to pay 80 percent of the total TL 150 million pension offered to the affected families for 40 years, if the company is found to have 80 percent of the blame.

The families have also material and moral compensation rights. Mehmet Tezel, head of the Labor Inspection Committee, and his delegation are visiting Soma to examine the working hours, wages and business management at the mine. In parallel with their report, the labor regulation regarding the mining sector will be renewed. The new regulation will bring the working standards of miners to the international standards practiced in Germany.
RELATED TOPICS