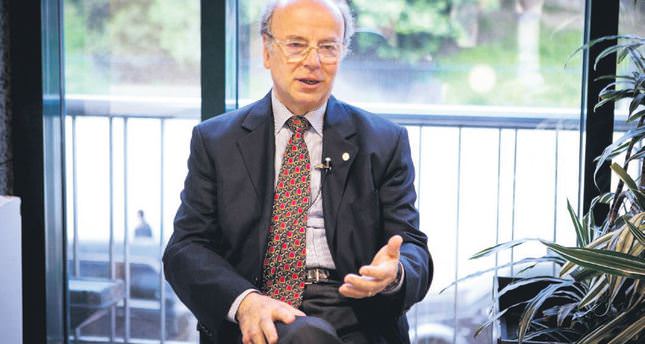 by Daily Sabah May 20, 2014 12:00 am
ISTANBUL — Turkey is currently trying to dress the wounds of the most devastating mine accident in its history. While experts investigate the causes of the accident, coal mines and coal power plants are back at the top of the agenda. In the 1980s, Turgut Özal, who was the prime minister at the time, intended to close down coal mines, regarding them as uneconomic and unsafe. Despite his best intentions, the mines remained open due to pressure from the opposition parties. The mindset of Özal might find itself reappearing after the disaster in Soma, while the energy sector in Turkey may go in search of alternatives, including nuclear energy.

Former Expert Inspector of Nuclear Safety at International Atomic Energy Agency (UAEA) Necmi Dayday, who achieved significant successes in İstanbul Küçükçekmece Nuclear Research Center, spoke to Daily Sabah about coal mines, the future of coal power plants and the steps Turkey took in the area of nuclearenergy. Dayday explained that Turkey's coal mining industry currently holds one of the worst fatality rates in the world. "It is obvious that there is a serious safety problem. Reduction of costs $123 dollars to $24 is presented as if it was a success - Alp Gürkan, owner of the Soma Mining Inc., stated during an interview in 2013 that his company reduced the costs of coal production from $123 to $24-. This is similar to bragging about providing cheap housings by constructing decaying buildings. "When compared to reserves in Europe, the coal mined in Turkey has much lower calories and efficiency. Technologies in coal power plants are remarkably out of date. If calculated, it is absolutely not economic. " he said.

Energy has always been a controversial subject, either due to its environmental damage or its human cost, and often both. With coal considered uneconomic, Dayday suggests nuclear power might be the only way forward. "Nuclear plants generate larger amounts of energy compared to other alternatives. It is much more effective than renewable energy sources like water, sun and wind. For instance, the problem of continuity is a really serious issue in renewable energy sources. When it comes to nuclear energy, it works whenever you need it. The usage of coal power plants is gradually decreasing in the world. It can be used for some more time through improving technology; however, it will not be economic in 30 years' time," the former inspector explained. "Those are significant steps, though retarded. International agreements have been signed in Akkuyu and Sinop for nuclearpower plants. When those reactors are completed, the need for coal plants will decline. When you build a reactor, your need for petroleum, gas or coal of 1.5 million tons will vanish. With the money we pay on petroleum or gas, a reactor can be installed per year in Turkey.

You can buy fuel enough for 10 years in a nuclear plant with a years' expense of a gas plant." While nuclear energy is often a controversial topic, there is no doubt about its position in the world economy and energy sector. While the coal industry makes Turkey seem out of date, nuclear energy is still positively modern. "There are 442 reactors all around the world, 105 of which are in the east of Turkey," said Dayday. "The U.S. alone has 101 reactors. Those reactors always renew themselves and enhance capacity. France constitutes a remarkable example on that matter as the country saves 50 million tons of petroleum thanks to 58 currently-operating reactors." For those concerned of radiation, Dayday shed light on the issue of affects reactors have on human beings and environment. "Reactors do not emit radiation that will harm human health. They do not harm to environment, either. A coal power plant is 50 times more harmful than a reactor," Dayday stated. Upon being reminded about the Chernobyl disaster, Dayday likened this example to planes whose models exist only in museums. "Nobody flies with them anymore. Likewise, energy is no longer generated with Chernobyl-type reactors. These kinds of reactors have not been installed for 40 years. Referring to Chernobyl in every nuclear accidents or incidents is to turn your back on science, technology and development in the 21st century. With the exception of Japan, there have not been any accidents in nuclear plants for the last 25 years.

Fukushima went through an earthquake and tsunami. It was not a nuclearleakage or explosion. Japan experienced the third most-intense earthquake in the world and 20,000 people died as a result. None of those deaths were caused by nuclear leakage," he remarked.
RELATED TOPICS