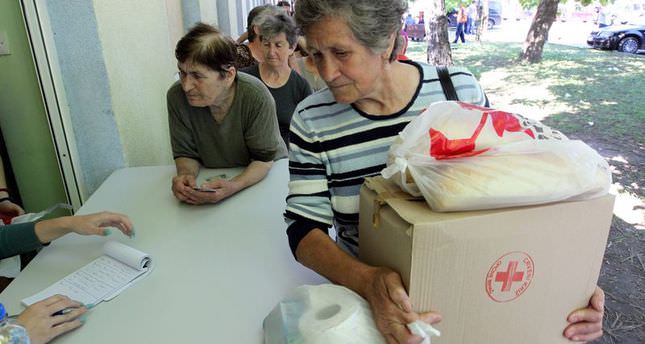 by May 22, 2014 12:00 am
ZAGREB — Croatia's football squad have donated a quarter of their money earned for reaching the World Cup finals to victims of deadly floods that have devastated the Balkans. Members of Bosnia-Hercegovina's World Cup squad, led by star striker Edin Dzeko, have also appealed for help for their stricken compatriots as they participate in a training camp near the disaster zone.

Croatia will take center stage when they face hosts Brazil in the opening game of this year's World Cup in Sao Paulo on June 12. Croatia coach Niko Kovac and striker Ivica Olic visited flood-stricken areas around Zupanja in the east of the country on Tuesday, cancelling all engagements to see the area where 15,000 people have fled. "If we fight in Brazil like these people here on the embankments and in flooded areas then we will be good," said the coach, who was visibly moved by the disaster. "In this suffering I also see something nice, people who support each other." Croatia's squad have agreed to donate about 130,000 euros (TL 377,090), one-quarter of the money they were given by the Croatian federation for reaching the finals in Brazil.

"I have spoken to the team captain, Darijo Srna, and we have decided that the players and the coaching staff will renounce a part of their World Cup playoff win bonus," said Kovac. Striker Mario Mandzukic took food aid to the village of Gunja in eastern Croatia in a separate mission. Mandzukic was born in the nearby town of Slavonski Brod which is threatened by the floods. He said he would try to get the whole national team behind the relief effort. Bosnia have qualified for the World Cup for the first time but their preparations have also been overshadowed by the disaster. The Bosnian team started a training camp this week at Hrasnica, near Sarajevo, which has been spared from the devastation.