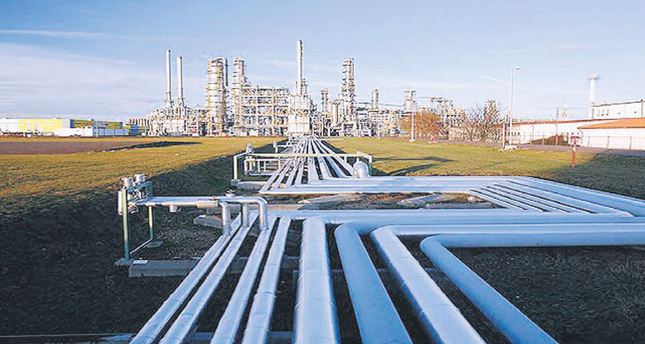 by AA May 26, 2014 12:00 am
BAKU — With the matter of energy increasingly playing a more important role in foreign policies, transportation of Turkmenistan natural gas to Europe across Azerbaijan and Turkey has put the Asian country at the center of a global power struggle. Having the fourth-largest natural gas reserves, Turkmenistan stands among countries which Europe will look in order to reduce energy dependency on Russia.
Turkmenistan has a natural gas reserve of 32 trillion cubic meters and is taking important steps toward being a global energy actor by producing nearly 80 billion cubic meters of gas per year. Currently, the country predominantly exports its natural gas to China, Russia, Iran and former Soviet countries.

Although experts put forward that the transportation of Turkmen gas to Europe would substantially reduce the energy dependency of EU countries on Russia, and Turkmenistan may become a rival for Russia, they agree that the project is not likely to be accomplished in the near future due to the objections from Russia and Iran. Russia and Iran's objections and the uncertain sharing of maritime issues of the Caspian Sea are all indicated to be the main factors against the transportation of Turkmen gas to Europe.

The head of the Azerbaijan Diplomatic Academy Energy Research Center Dr. Elnur Soltanov stated that the issue of transportation of Turkmenistan gas to Europe is put on the agenda from time to time and the suggested routes are Azerbaijan-Georgia-Turkey across the Caspian Sea or Iran. Soltanov said that Turkmenistan has problems transporting natural gas due to its strategic position and would have to use pipelines. "However much the issue is brought to agenda in various circles in Europe, Russia and Iran do not want the Turkmen gas to be transported to Europe," Soltanov remarked.

Soltanov highlighted that Russia makes both political and economic gains, as is seen from the Ukrainian incidents, with the sales of gas to Europe and added that Turkmenistan may compete with Russia in the European market when reserves are taken into account. He stressed that such a condition would never be welcomed by Russia saying "Taking into consideration that the status of the Caspian Sea has yet to be clarified, Russia is a politically and militarily powerful country and has become radical in its incidents in Ukraine. "The transportation of Turkmen gas to Europe seems to be a low possibility.

This can only be possible if Europe and the U.S. can balance Russia. Iran does not want Turkmenistan gas to be transported to Europe, either, due to political and economic reasons," Soltonov said. "As the two powerful countries do not want the transportation and other big countries are also reluctant for now, this project will remain only in the level of thought.

Without a strong will against Russia and Iran, the transmission does not seem possible in the near future. Still, they will keep this thought conceptual so as to be able to realize it in any chance," Soltonov concluded.

Foreign affairs expert Dr. Zaur Şiriyev expressed that Turkmenistan is a significant alternative for the establishment of energy security, the transmission can be facilitated technically through a line in the Caspian Sea and any agreements could not be reached despite protracted discussions.

Şiriyev explained that Turkmenistan wants to sell natural gas to Europe, yet it acts tentatively by taking into consideration international factors and surrounding incidents.

Turkey also wants Turkmenistan gas to be transported to Europe across its soils. This tripartite negotiation created the hope that Turkmenistan will change attitude on this matter. Turkmenistan regards Asian markets more attractive than the current energy policy and thus tries to gain strength in the area. In the autumn of this year, in the summit of presidents, the issue will be opened to discussion if remarkable progress seems to be possible on the matter of main principles of the Caspian problem. However, even if Turkmenistan wants to take a role in European energy security, Russia and Iran have the power to obstruct it," Şiriyev concluded.
RELATED TOPICS