Turkey to increase its stake in TANAP 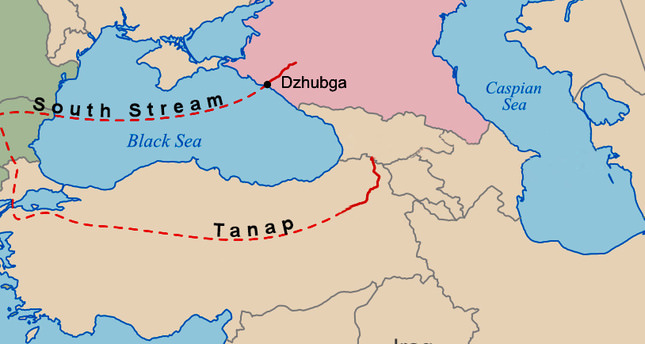 Ankara and Baku will take an important step in energy cooperation today, allowing Turkey to become the second-leading arbiter in the TANAP project

Turkish Energy Minister Taner Yıldız and Azerbaijani Energy Minister Natiq Aliyev will sign an agreement today under the auspices of Turkish Prime Minister Recep Tayyip Erdoğan in Istanbul to increase Turkey's share in the Trans-Anatolian Pipeline Project (TANAP) to 30 percent. TANAP is the natural gas pipeline project that will carry Azerbaijani natural gas from Azerbaijan's Shah Deniz II field in the Caspian Sea - one of the world's largest gas fields - to Europe through Turkey.

Turkish Petroleum Corporation (TPAO) and Petroleum Pipeline Corporation (BOTAŞ) already have a 20 percent share of the project and Turkey's share will increase to 30 percent with today's agreement.

The world oil giant British Petroleum recently announced it has agreed to join the State Oil Company of the Azerbaijan Republic (SOCAR) by buying a 12 percent stake from SOCAR. On the other hand, SOCAR has repeatedly expressed its intention to retain at least a 51 percent share in the TANAP project. The cost of the TANAP project is estimated at between $10 billion (TL 20.92 billion) and $11 billion, and the shareholders plan to lay the pipeline's foundation in the beginning of 2015 and commission it in 2018.

TANAP is scheduled to start carrying 16 billion cubic meters (bcm) of gas annually in 2018 or 2019 from Azerbaijan's Shah Deniz II field. Turkey will receive 6 bcm of natural gas, while 10 bcm, equal to about 1.5 percent of Europe's total consumption, will flow to Europe.

The TANAP project was announced in 2011 and Turkey and Azerbaijan signed a memorandum of understanding establishing a consortium to build and operate the pipeline. In June 2012 Turkish Prime Minister Erdoğan and Azerbaijani President Aliyev signed a binding intergovernmental agreement on the pipeline.

According to data obtained by the Turkish Ministry of Energy and Natural Resources, the Turkish segment of the pipeline will be approximately 1,800 kilometers long, which requires 2 million tons of steel pipes. There are 18 different Turkish steel pipe suppliers involved in the Project. Moreover, the project is expected to create 5,000 jobs in 21 provinces in Turkey.

Last year, Shah Deniz partner companies selected the Trans Adriatic Pipeline (TAP), which will connect with TANAP at Turkey's European border to carry the Azeri gas to Europe. On the other hand officials from the consortium's participating companies from time to time stretch out for the future prospects of "opening" both Turkmenistan and Uzbekistan's great gas potentials, thus being able to accommodate a serious upgrade of the TANAP-TAP-IAP system of pipelines for multiple times its original capacity design. Azeri officials have recently said they will back the construction of a gas pipeline from Turkmenistan to Azerbaijan across the Caspian Sea, if Ashgabat reaches such a decision. Turkmenistan expects to produce between 75 bcm and 80 bcm of natural gas this year; It aspires to more than triple annual gas output to 250 bcm by 2030. Regarding this issue, Turkish Energy Minister Taner Yıldız recently noted Turkey's intention to incorporate 5-6 cubic meters Turkmen natural gas into TANAP project.