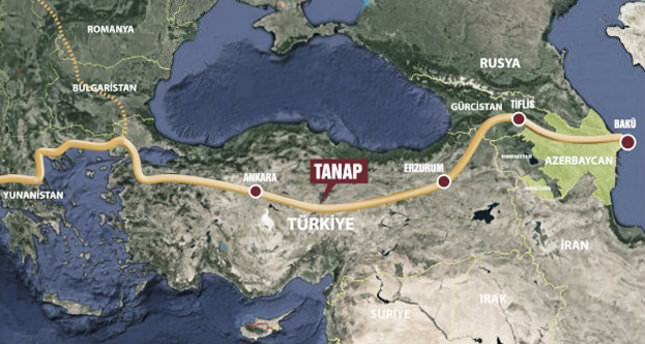 by AA May 31, 2014 12:00 am
ANKARA — Azerbaijani natural gas is crucial for Turkey to meet its energy needs in a safe and economic way, said a member from the Caspian Strategy Institute (HASEN).

"Turkey will be actually consuming the gas that it produces," said Fatih Macit from Caspian Strategy Institute (HASEN) on Friday. By increasing its shares in Trans Anatolia Natural Gas Pipeline and Shah Deniz, Turkey will also increase its income from the revenues of these two important projects."

Owning close to 20 percent of the Shah Deniz gas field, Turkey now has the potential to benefit from natural gas much more, but on the soils of Azerbaijan.

Emphasizing that two thirds of the world's natural gas reserves are located in the east of Turkey, Macit said the country is bound to be a bridge for transport of the Shah Deniz gas to the world's biggest natural gas importing region, Europe.

He added that the increasing cooperation between the State Oil Company of Azerbaijan Republic (SOCAR) and Turkey also creates further possibilities of cooperation in the Balkans.

"The European extension of TANAP will pass through Balkan countries and among these countries are Kosovo and Albania, which do not have any natural gas infrastructure, Macit said. This creates new opportunities,"

Shah Deniz is among the largest gas fields in the world with nearly 1.4 trillion cubic meters of natural gas. Apart from Azerbaijan, gas extracted from Shah Deniz field is exported to Georgia and Turkey.

An additional phase of drilling and pipeline projects has been undertaken in recent years in order to extract additional gas from Shah Deniz and export it to European markets via TANAP.