Turkey boosts share in pipeline that will carry Azeri gas 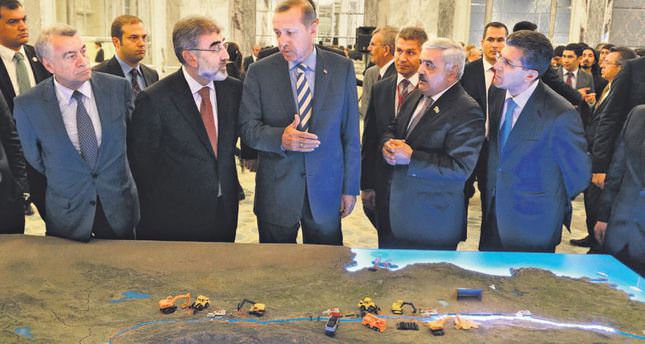 ISTANBUL — The signing ceremony of Shah Deniz natural gas field and the Trans-Anatolia Natural Gas Pipeline (TANAP) Project was held in Istanbul on Friday with the participation of Prime Minister Recep Tayyip Erdoğan, Azeri and Turkish energy ministers and representatives from companies working on the projects.

According to the deal Turkey will be the secondlargest shareholder of TANAP with 30 percent.The deal also increases state-partnered Turkish Petroleum Corporation's share in the Shah Deniz field from 9 percent to 19 percent. Speaking during the event, Erdoğan noted that energy security has become an issue associated with sustainable development, foreign policy, national security and economic growth.

Erdoğan also emphasized that there are newly emerging actors in the global energy market, which leads previous actors to alter their energy policies. "Interstate corperation attempts have become one of the most significant issues of the day," Erdoğan said. The prime minister also underscored the importance of establishing a dialogue and an effective cooperation between producer and consumer countries. "With this regard, we have built the eastwest energy corridor alongside the Baku-Tbilisi-Ceyhan crude oil pipeline project with our friendly sister country, Azerbaijan. I would like to point out that Georgia has played a crucial role in carrying out these projects. Today, we are witnessing an important step in establishing the TANAP within the anticipated schedule," said Erdoğan.

Prime Minister Erdoğan stated that the latest developments, especially the incidents in Ukraine, have showed the importance of alliance between the two countries. "Such projects implemented by Turkey, are a milestone that forms our geographical, political, social and economic prospects," Erdoğan said. With its population of about 77 million, developing economy, rapidly increasing energy demands, and its target to be an energy source, Turkey is a rising country said Erdoğan. "Within this scope, our goal is to transform Ceyhan into the largest terminal of the Eastern Mediterranean and the second largest one in all of Europe after Rotterdam," he added.

Through TANAP, Turkey will also gain significant income along with the security of oil supply, variety of supply, and strategic advantages such as being the distribution center of the west-east energy line. "We don't only regard TANAP as a commercial investment, we also believe that TANAP will be a project that will build strong and organic relations with Azerbaijan and European countries that will last for many years," Erdoğan said.

According to data obtained by the Turkish Ministry of Energy and Natural Resources, the Turkish segment of the pipeline will be approximately 1,800 kilometers long, which requires 2 million tons of steel pipes. There are 18 different Turkish steel pipe suppliers involved in the project. Moreover, the project is expected to create 5,000 jobs in 21 provinces in Turkey.

Last year, Shah Deniz partner companies selected the Trans Adriatic Pipeline (TAP), which will connect with TANAP at Turkey's European border to carry the Azeri gas to Europe. On the other hand officials from the consortium's participating companies from time to time stretch out for the future prospects of "opening" both Turkmenistan and Uzbekistan's great gas potentials, thus being able to accommodate a serious upgrade of the TANAP-TAP-IAP system of pipelines for multiple times its original capacity design.
RELATED TOPICS