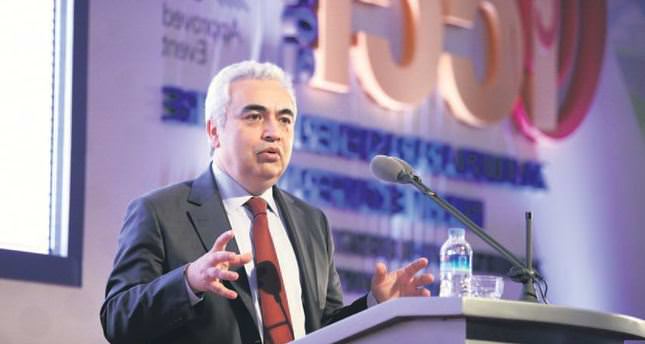 by Daily Sabah Jun 05, 2014 12:00 am
ISTANBUL — International Energy Agency (IEA) Chief Economist Fatih Birol has said Turkey is economically the most convenient energy line for exporting the energy resources found in the Eastern Mediterranean Sea around Israel and Cyprus. "Compared with other energy lines, transferring the energy through Turkey would be seven times cheaper for Israel," Birol said. Birol said transferring Eastern Mediterranean energy resources to the international energy market at a lower cost also would increase vendors' profits. If the political problems in the region could be resolved, Turkey, which desires to become a major energy hub connecting suppliers with consumers in the West, could play a major role in the energy transfer of the region, he said.

Birol said the conflict between Iraq's central and regional governments poses a serious problem with regard to the matter of transferring the country's rich energy sources to international markets, adding that the resolution of this problem would especially contribute to Turkey. "It is so easy to increase oil production in Iraq in northern, southern and central territories since the production cost of oil is under $5 in the country, while this cost is about $80 in the U.S. and $75 in Russia. So, Iraq has quite cheap and rich reserves, and the main problem in Iraq is currently the problems between Baghdad and Irbil.

When these problems are resolved, Iraq will be able to transfer a considerable amount of oil and gas to the world. And Turkey might play a major role here," Birol said. w"After the foundation of a new government in Iraq, I hope its first attempt would be resolving the problems between Baghdad and Irbil because in the current picture, a lose-lose situation is prevailing in Iraq, let alone a win-win situation. This is not in favor of anyone," he said.
RELATED TOPICS