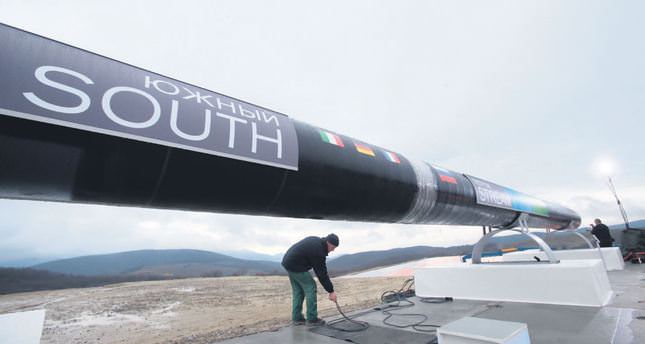 by Anadolu Agency Jun 10, 2014 12:00 am
Bulgaria's Prime Minister Plamen Oresharski ordered on Sunday a halt to construction work on the Gazprom-led South Stream pipeline project planned to bypass Ukraine as a transit country and consolidate Russia's energy grip in Europe just on the eve of the EU-mediated gas talks in Brussels. Oresharski said work on the project would continue pending consultations with Brussels. Last week, the European Commission opened an infringement procedure against the Balkan country and asked construction work to be stopped, arguing that Bulgaria hadn't respected EU internal market rules.

Serbia's Deputy Prime Minister and Minister for Transport and Infrastructure Zorana Mihailovich also announced Serbia was halting work on the gas line, in response to Bulgaria's yesterday's decision to suspend. Serbia didn't cite political reasons, but rather said that they can't complete their part of the project while there is a delay in Bulgaria. Mikhailovich said Serbia will wait until Bulgaria completes negotiations or Russia changes the pipeline route. "Bulgaria - is the center. Until Bulgaria finishes negotiations with Brussels and the European Union and Russia, the project is suspended.

Or until Russia changes the route. Either way, the first and second scenarios means there will be a delay in construction in our country," Mihailovich was quoted as saying in Belgrade's Blitz newspaper yesterday.

Meanwhile, Bulgarian Energy Minister Dragomir Stoynev said in a statement he was certain South Stream would be built once disputes over how to structure it as a European project are cleared. "If we look at the situation strategically and without emotions, the South Stream project looks irreversible and important for both Europe and Bulgaria," Stoynev, who is on a visit to China, said. "I am convinced that all pending issues will find a solution."

The standoff over Ukraine has forced the 28-nation EU into a sudden rethink of its energy policies to make it less reliant on Russia and its state-owned gas company Gazprom. In particular, the EU decision will affect the South Stream pipeline, in which Russia's Gazprom holds a 50-percent stake, and would provide an alternative supply route for Bulgaria, Serbia, Croatia, Hungary, Slovenia, Austria and Italy. It is expected to ship up to 63 billion cubic meters of gas from 2018. In response to Bulgaria halting work, Kremlin spokesman Dmitry Peskov was quoted by RIA Novosti news agency yesterday as saying: "(We) need to check, it is too early to say anything." European Commission spokeswoman Sabine Berger declined to comment on Stoynev's statement, but welcomed the position of EU member Bulgaria to halt work. "This is an important step in response to the concerns raised by the Commission last week," she said. "In the recently adopted European Energy Security Strategy, the European Commission has called for a discussion on South Stream at the upcoming European Council so that a common EU approach can be taken."

Washington has also warned Sofia that picking a consortium led by sanctionshit Stroitansgaz to build the Bulgarian section of the pipeline could result in sanctions on Bulgarian companies involved. South Stream is being built to pipe 63 billion cubic metres of gas per year from Russia, beneath the Black Sea, and through Bulgaria into central and southern Europe. Bulgaria's Stoynev, a staunch supporter of the project, says it will boost the country's energy security and economy. Bulgaria currently gets almost all of its gas from Gazprom via pipeline through Ukraine. State-controlled Gazprom is pushing ahead with the project, expected to be cost around $45 billion, despite Western sanctions against Moscow over the Ukraine crisis.
Last Update: Jun 10, 2014 1:44 am
RELATED TOPICS