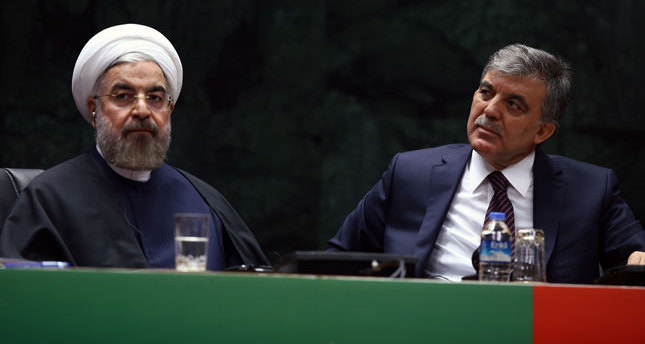 ISTANBUL — Turkey will bolster its trade ties with neighboring Iran by speeding up the implementation process of a preferential trade agreement signed in January, Prime Minister Recep Tayyip Erdoğan said Monday. "We had set a goal during my visit to Iran in January: to raise trade between the two countries to $30 billion (TL 62.6 billion) by 2015," Erdoğan told a joint press conference with Iranian President Hassan Rouhani in the Turkish capital, Ankara.

Erdoğan said trade between Turkey and Iran stood at $22 billion in 2012 before dipping to $14.5 billion in the following year due to economic sanctions imposed on Tehran. "As part of our endeavor to fix this, we have reaffirmed the necessity of forming a High Council of Strategic Cooperation and establishing a preferential trade zone between the two countries," he said. Trade volume between Turkey and Iran stood at $3.2 billion in the first quarter, according to Turkey's official statistics office. For his part, Iranian President Rouhani said Erdoğan and himself exchanged views on bilateral ties and regional developments. Calling on Turkish businessmen to invest in Iran's railways and ports, he said Iran and Turkey reached agreements to boost cooperation in energy, transportation, tourism and banking.
Asked whether he congratulated Syrian President Bashar Assad for his victory in presidential elections, Rouhani said, "Yes, I sent him a congratulation letter."

Turkey and Iran are split in their opinions over Syria with Iran being an ally of the Syrian regime and Turkey one of its fiercest critics. "[The election] was the first step for stability and peace...Syrian people are entitled to decide the future of Syria,"

Rouhani said. Denounced by some Western countries and Turkey as "farce," last week's presidential poll saw Assad winning a landslide third term in office amid ongoing civil war. Asked whether his visit would help Turkey buy cheaper gas from Iran, Rouhani said they discussed the issue and relevant ministers of both countries would continue negotiations. Iran is the most expensive gas suppliers to Turkey, which imports most of its 10 billion cubic meters of natural gas per year from Russia.

Iran is one of the largest trade partners of Turkey and as a neighboring country Iran has close economic relations. Both countries improve their commercial and trade relations through Joint Economic Commission (JEC), Joint Border Trade Commission, Cooperation among provinces and trade delegations. The 23rd Session of JEC between Turkey and Iran was held on Jan. 18 and 19, 2012 and both sides signed the Memorandum of Understanding which includes all cooperation fields between two countries.

In order to complete the legal framework of bilateral commercial and economic relations, Turkey and Iran have signed a number of agreements, including Double Taxation Prevention Treatment (2002), and Bilateral Investment Promotion and Protection Agreement (1996).

Turkey was the sixth-leading trading partner of Iran in the previous Iranian calendar year, which ended on March 20, 2014, according to the Iranian Customs Administration.

Annual non-oil trade between Iran and Turkey amounted to $5.286 billion in the previous Iranian calendar year. Turkey exported $3.646 billion of non-oil goods to Iran and imported $1.64 billion of nonoil goods from the country in Iranian year 1392 (March 2013-March 2014). On April 15, Tehran and Ankara set an annual trade target of $30 billion at the 24th meeting of the Iran-Turkey Joint Economic Commission, which was held in Tehran. In January, Iran and Turkey signed a preferential trade agreement, with the goal of boosting bilateral trade. The agreement was signed during Erdoğan's visit to Iran.
RELATED TOPICS