Russia cuts gas to Ukraine in new phase of their conflict 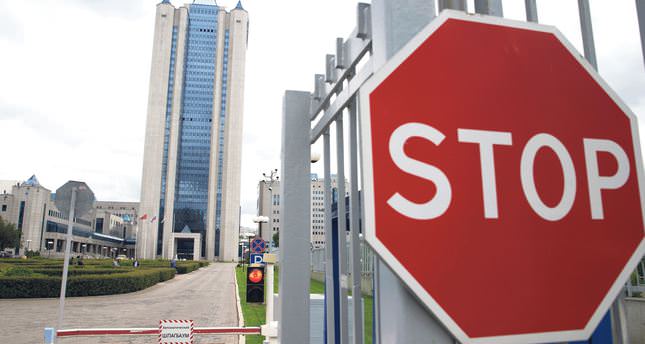 Russia has rejected a compromise deal with Ukraine on natural gas purchases and cut off supplies yesterday. Gasprom said gas for European clients would continue to flow through pipelines via Ukraine.

Europe risked gas supply disruptions yesterday after Russia rejected an 11thhour compromise deal with Ukraine and cut its supplies in a feud that has further fractured East-West relations. Ukraine said yesterday Russia has cut off all gas supplies to Kiev, in a major escalation of a dispute between the two nations. "Gas supplies to Ukraine have been reduced to zero," Ukrainian Energy Minister Yuri Prodan said.

Russia's state-owned gas giant Gazprom said Ukraine had to pay upfront for its gas supplies, after Kiev failed to settle its huge debt. Gazprom had sought from Kiev $1.95 billion (TL 4.17 billion) out of $4.5 billion it says it is owed. The Russian firm said it would continue to supply gas to Europe. Russia-Ukraine ties remain tense since Moscow annexed Crimea in February. Kiev says Moscow backs separatists in the east of the country.

Russia denies the charge. "They insisted [on getting] the $1.9 billion immediately," European Union Energy Commissioner Guenther Oettinger said. "Today [Monday], from 10:00 Moscow time (GMT 07.00), Gazprom, according to the existing contract, moved Naftogaz to prepayment for gas supplies," Gazprom said in a statement on Monday morning. "The Ukrainian company will receive Russian natural gas only in the amounts it has paid for," it added.

Moments later, both Gazprom and Ukraine's state-owned Naftogaz company filed lawsuits against each other in the Stockholm arbitration institute. Gazprom said it wanted to recover $4.5 billion from Naftogaz, which is dealing with gas supplies to Ukraine. Meanwhile, Naftogaz said it was seeking to recover $6 billion in "overpayment" for gas since 2010.

Russian Prime Minister Dmitry Medvedev said Ukraine's position on the issue "smacks of blackmail." Medvedev stated that Moscow was ready to continue gas talks with Kiev if Ukraine fully paid down its debts for Russian gas supplies. The latest moves follow crisis talks between Ukraine, Russia and the EU on the issue. Alexei Miller, CEO of Russian gas exporter Gazprom, accused Kiev yesterday of adopting an "unconstructive" position in gas talks and of using blackmail to try to get an "ultra-low" price.

Ukrainian Prime Minister Arseny Yatseniuk, sitting beside Naftogaz CEO Andriy Kobolev at a news briefing, blamed the breakdown of talks in a gas pricing dispute on Russia, saying Moscow had hoped to cause Kiev problems in winter. "But it is not about gas. It is a general Russian plan to destroy Ukraine," Yatseniuk said. European Energy Commissioner Guenther Oettinger, who has brokered a series of three-way talks between Russia, Ukraine and the EU, urged Moscow to consider a compromise gas pricing offer for deliveries to Ukraine and he said he hoped to convene more talks this month. However, correspondents say the EU could be affected. About 15 percent of the EU's gas supply is Russian gas which is piped through Ukraine. Ukraine said it refused to clear its debts completely in protest at Gazprom's recent 80 percent price increase. Before the discount was cancelled, Ukraine's gas bill was heavily reduced by Russia to $268 per 1,000 cubic meters. The price is now $485.50 per 1,000 cubic meters, the highest in Europe.

Prospects of a breakthrough in discussions were diminished in recent days after increasing tension between Kiev and Moscow over the pro-Russian insurgency. Moscow reacted angrily to a violent protest outside its embassy in Kiev on Saturday after separatists shot down a Ukrainian military plane, killing all 49 people on board. Meanwhile, Ukraine accused Russia of sending tanks into the east of the country to support pro-Russian fighters.
Last Update: Jun 17, 2014 1:18 am
RELATED TOPICS