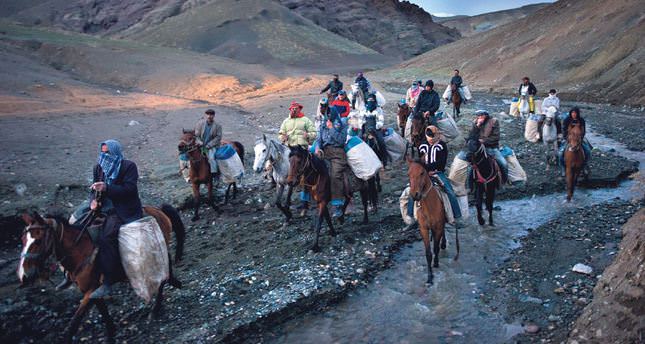 by Daily Sabah with AA Jul 15, 2014 12:00 am
ISIS's seizure of the largest refinery in Iraq has caused locals to resort to smuggling to meet the gasoline demand in the north, with the town of Biyare becoming a hub for gasoline illegally brought over from Iran.

The Islamic State of Iraq and al-Sham (ISIS) has been closing all the ways to Baiji Refinery, the largest oil refinery in Iraq, causing oil shortages which has benefited Iranian and Kurdish smugglers. Each of the 200 smugglers bringing oil using 450 mules via Iran earns at least $100 daily.

The town of Biyare in Halabja province located on the Iranian border of the Kurdistan Regional Government (KRG) is known as the center of gasoline smuggling. Numbers written on stones are accepted as the border between Iran and the KRG. As there are no walls or barbed wire on the border it makes smugglers work easy. Smugglers who carried alcoholic beverages and electronic devices previously between the two sides of the border, started to carry gasoline since it is more profitable. A group of 20-30 smugglers on the Iranian side carry oil on mules to the town of Biyare after sunset. Since the field is mountainous, smugglers load and unload three times in one night.

Each mule carries 114 liters of oil. When gasoline reaches the town of Biyare it is loaded into the oil tankers of merchants and distributed to other areas. The oil bought at 45 cent in Iran is sold at 64 cent to the merchants in the Kurdish region. If a smuggler carries oil three times in a day, he earns at least $100. Merchants release the oil they bought from smugglers to the market at 90 cent.

Galip Selim Mustafa, a long-time oil merchant in the town of Biyare, said that Iran and the KRG governments knew about smuggling and that the gate was used as illegal border crossing. In addition to stating that they have been busy for the last few weeks because of the oil shortage in Iraq, Mustafa said, "We get 40,000-60,000 liters of smuggled gasoline every night. After sunset, if Iran border police allow, smugglers set off. This work starts at night and continues until the morning.

There are 200 smugglers earning money from this work." A young Iranian man, who wanted to remain anonymous, said they went smuggling every night because of unemployment and he added that "I have a bachelor's degree but I couldn't find a job. I am smuggling oil because our town is near the border.

My father and I carry oil from Iran to the Kurdish region three times a night. We carry nearly 300 liters of gasoline at one time. We earn $100 daily, which is a huge amount of money in Iran." Other Iranian smugglers said that because of the economic crisis in their country, border police sometimes shut their eyes to smuggling, but sometimes they seize mules and burn the gasoline.

Biyare Town Governor Nugşa Naib said that "After the oil crisis in the Kurdish region, this border became a place where people earn their living. In the first place, the means for living in the local community was smuggling.

Alcoholic beverages and electronic devices were smuggled previously. But then smugglers started to carry gasoline since it is more profitable."

Saying that the KRG allows smuggling, Nasip noted that "Taking a sample from the smuggled oil, we make a quality test in our laboratory. If test results are fine, we allow the sale. If not, we warn smugglers to destroy it."