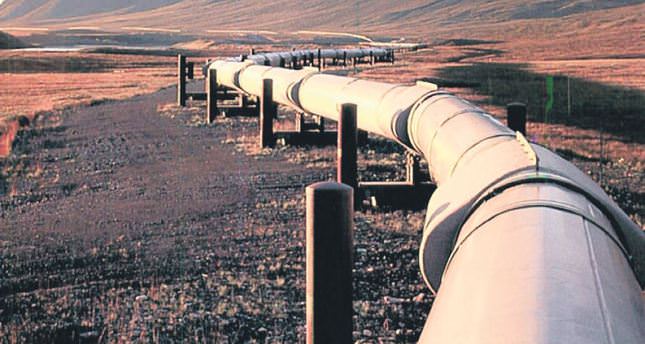 The Kurdish Regional Government (KRG) claims it will increase oil exports to Turkey from 120,000 barrels per day to 400,000 by year's end, however experts believe this hints at a bid to export disputed Kirkuk oil in violation of Iraq's constitution. Northern Iraqi oil began being shipped from Turkey's Ceyhan Port to international markets on May 22 without consulting Baghdad. Since then, the KRG has been sending 120,000 barrels per day to Ceyhan. On Tuesday, a KRG spokesperson said Turkey was told to prepare for an increase in shipments of 280,000 barrels per day.

Northern Iraq extracts oil from two fields; Tawqe and Taq Taq, which produce 120,000 and 113,000 barrels of oil per day respectively. Part of this total daily production of 233,000 barrels of oil is already used for domestic purposes within the Kurdish region. It seems unlikely that the KRG could increase production to 400,000 barrels of oil per day for export in such a short period of time. Experts told Anadolu Agency that the KRG's new calculation of exports might include oil from Kirkuk - a disputed territory between Erbil and Baghdad. KRG's July 11 announcement that they had seized two oil fields in Kirkuk - Bai Hassan and Makhmour - further strengthened doubts. KRG President Masoud Barzani rushed to hold a referendum on Kirkuk, claiming Article 140 of the Iraqi constitution is already implemented on the grounds that peshmerga forces seized most of the disputed territories, including the Kirkuk oil fields, when they were deployed to fight Sunni insurgents of the Islamic State of Iraq and al-Sham (ISIS) in the beginning of June.

Article 140 is related to the normalization of the situation in Kirkuk and other disputed areas through the repatriation of its inhabitants prior to Arabization which took place during the Saddam era. The article also calls for holding a census to be followed by a referendum to allow the inhabitants to decide whether to be part of the KRG or the Baghdad government.

On the other hand, the Patriotic Union of Kurdistan (PUK) led by former Iraqi President Jalal Talabani, who governs the major part of Kirkuk, and Kirkuk Governor Najmaddin Kareem, a possible candidate for the Iraqi presidency, opposes de facto implementation of Article 140 claiming the move would be unconstitutional. Head of Carduchi Consulting and Energy Expert, Shwan Zulal said the dispute is a power struggle between the Kurdish government and the main opposition party PUK, and he believes differences will be ironed out in time as the dissenting voices in PUK shrink.

Zulal said the goal of 400,000 barrels of oil may now become a real possibility depending on who will be the next Iraqi prime minister and how the political process will progress in Iraq. Ali Semin, an expert from Istanbul-based think tank BİLGESAM said this new plan absolutely includes Kirkuk oil. He added, "If Kurds sell Kirkuk's oil, they will completely violate the constitution. Arabs and Turkmens of the city will not stay calm after that, and Turkey will be dragged into a difficult position."

There has been no oil flow from central Iraq to Turkey since March due to ISIS threats en route to the Kirkuk-Ceyhan pipeline. Last month, the KRG announced that they linked Kirkuk oil distribution infrastructure to their own pipeline which sends Kurdish oil from Tawqe and Taq Taq oil to Ceyhan. The new link binds Kirkuk's oil formation, Avana dome to the Khurmala oil field, where the Kurdish pipeline begins.

On July 11 the KRG announced Kurdish forces moved to secure the oil fields of Bai Hassan and the Makhmour area, after allegedly learning of orders from Baghdad officials in the federal Ministry of Oil to sabotage the recent mutually-agreed pipeline infrastructure linking the Avana dome with the Khurmala field. The announcement says the Avana and Makhmour fields were producing about 110,000 barrels of oil per day.

Iraq is losing $1.5 billion (TL3.1 billion) per month as the Kirkuk-Ceyhan oil pipeline has stopped operation since March due to the insurgency led by Sunni fighters, according to an Iraqi oil ministry official. The main oil pipeline between Iraq and Turkey has been out of action since March due to attacks on the pipeline by militants from the Islamic State in Iraq and al-Sham, known as ISIS. The Kirkuk-Ceyhan pipeline has a maximum operational capacity of 400,000 barrels per day, but actual flows were around 300,000 barrels per day due to attacks on the pipeline which frequently disrupted the operation, according to the Office of the Special Inspector General for Iraq Reconstruction.

Baghdad-based economist Jamil Anton said oil damages will increase the budget deficit. "The Iraqi budget for 2014 is $151 billion and this is calculated with a maximum oil production of 3.4 million barrels per day," Anton said. "But Iraq currently exports 2.6 million barrels per day." But the press adviser for the Kurdish Regional Government's Parliament, Tareq Jawhar, told The Anadolu Agency that statements regarding the economic damage caused by ISIS are only excuses for not being able to protect the pipeline. Although the pipeline from Kirkuk has been out of operation since May 22, the Kurdistan Regional Government (KRG) has been exporting its own oil via a new pipeline to Turkey, despite long-standing disagreements with Baghdad over the sale of oil through Turkey to the international market.
Last Update: Jul 18, 2014 12:14 pm
RELATED TOPICS