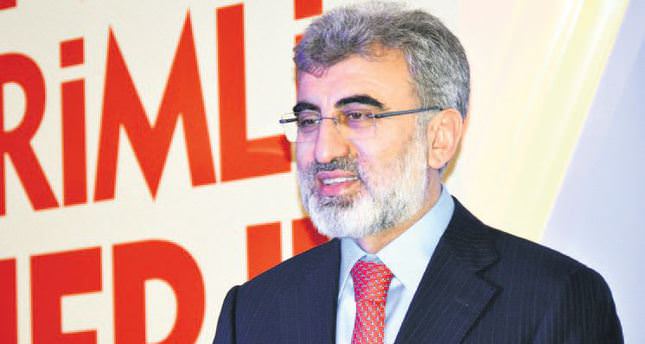 by Uğur Becerikli Jul 19, 2014 12:00 am
While speaking on the latest developments concerning the Kurdistan Regional Government's (KRG) sale of oil via Turkey, Turkish Energy Minister Taner Yıldız said that a crude oil pipeline agreement signed in 1973 between Iraq and Turkey is still in effect and an amendment made in 2010 is also valid.

Both deals stipulate that crude oil extracted in Kirkuk will be shipped to international markets via the Ceyhan pipeline. Yıldız replied to the parliament member's questions concerning the reaction of the Iraqi central government after the KRG said activities related to energy are being carried out in accordance with multilateral and international agreements. Yıldız also stated that there is no sale and purchase agreement between Iraq and Turkey but there are agreements signed with private firms and the Iraq Oil Marketing Company (SOMO). Yıldız said Turkey does not differentiate between the north and south of Iraq and added that amendments and other protocols were issued on Sept. 19, 2010.

There are more than 40 global firms operating in Northern Iraq. Concerning a lawsuit filed by Iraq Yıldız said, "The amendment agreement in 2010 and the 1973 Crude Oil Pipeline Agreement do not differentiate between the north and south of Iraq. Whether it is coming from the north or the south, any crude oil received from the pipeline is considered Iraqi petrol. Our energy relation with Iraq is carried out according to international law."
The Ministry of Oil in Iraq applied for arbitration before the International Chamber of Commerce in May 21, 2014. Yıldız said, "We still have very good relations with the Iraqi government.

TPAO [National Oil and Gas Company of Turkey], operating under our ministry is continuing their work as a consortium on two natural gas and two crude oil sites. Our relations with Iraq have improved and it has become one of our major trade partners."

TPAO has $26 million (TL 55.2 million) worth of investments in Iraq while Turkish Petroleum International Company (TPIC) continues its fieldwork in the Rumelia oil field together with the Iraqi National Petrol Company SOC at 45 oil wells.

Turkey's exports to Iraq have increased by 10 percent since 2012, reaching $11.9 billion, becoming the second country with the highest level of exports following Germany. "When the economic support of Turkey to Iraq's development and normalization process and trade potential between two countries are considered, just as always, we will continue to support any activity in Iraq," said Yıldız.
RELATED TOPICS