Turkey's wind energy capacity increases in first half of 2014 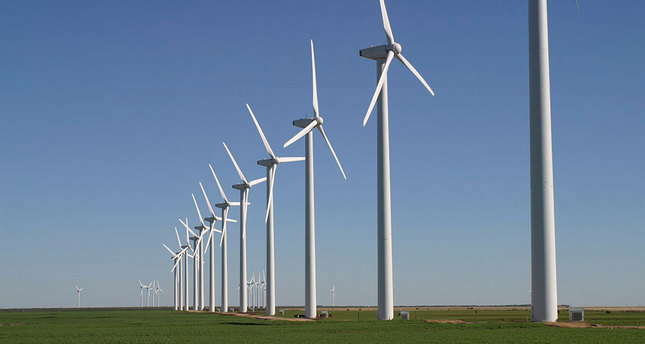 by AA Jul 22, 2014 12:00 am
Turkey's wind energy capacity has posted a 466 megawatt (MW) increase during the first half of the year, according to the Turkish Wind Energy Association.

The country's total wind energy capacity has reached 3,424 MW with a 466 MW increase in the first six months of 2014, Mustafa Serdar Ataseven, chairman of the association, told Anadolu Agency on Tuesday.

He said the year-end target was to reach around 4000 MW by adding 900-1000 MW to the total capacity of the wind energy in Turkey.

87 wind plants have become operational in the country, while 39 more are currently under construction, he added.

38 percent (1,311 MW) of Turkey's installed wind energy capacity is located in the western region, whereas 36 percent (1,240 MW) of the capacity is based in the northwestern Marmara region which includes the country's largest city, Istanbul.

The southern region ranks third with 15 percent (543 MW), according to the 2014 Turkish Wind Statistics Report.

Provincial data in the report show that Balikesir province in the Marmara region ranks first with 767 MW, Izmir second with 576 MW and Manisa third with 393 MW in terms of installed wind energy capacity in Turkey.

Turkey aims to supply 30 percent of its total energy demand from renewable energy sources including wind, solar and hydro power.