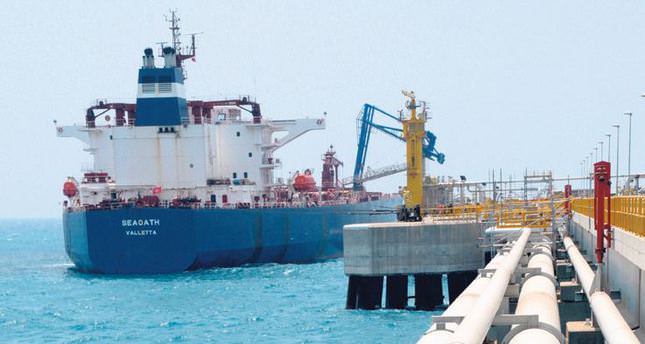 by Daily Sabah Jul 26, 2014 12:00 am
The first tanker carrying Kurdish oil that departed from Turkey's Mediterranean port in Ceyhan, is expected to arrive at Galveston, Texas on Saturday. A second ship - the United Leadership - is still waiting off the coast of Mohammedia, Morocco and a third tanker - the United Emblem - is sailing to Malaysia while a fourth - the United Kalavrvta - has been sailing in the Gulf of Mexico, according to ship tracking devices. U.S officials have consistently stated that they are against Kurdish oil sales without the Iraqi central government's consent and Washington has been pressuring companies and governments not to buy KRG oil.

Therefore United Kalavrvta's possible discharge on U.S. soil might be an important sign that hints at a change in the U.S.' position in favour of KRG oil imports. Regarding the London-based Carduchi energy consulting firm's head, Shwan Zulal told Anadolu Agency (AA) that it is too early to say the U.S. position has changed. "But the fact that the tanker is heading there without serious opposition indicates the U.S.' position may be softening due to the whole situation in Iraq and the dire finances of the KRG," Zulal added. Moreover the head of the U.S. State Department's Energy Bureau, Carlos Pascual told Reuters on Thursday that there had been no change of policy in Washington towards Kurdish independent oil sales, but he said he hoped the central government and the region could reach an agreement in time. "We have made people aware that whatever they buy entails certain risks, and we have consistently told them about that," Pascual said. However, oil industry sources believe that it is too early to comment on this issue without seeing the offload of the tanker on U.S. soil. Sources also said that the tanker may change its position and go somewhere other than the anticipated destination of Galveston port.

On the other hand, Baghdad's stance on this issue has not changed. The Iraqi National Company responsible for marketing the State Organization for Marketing of Oil (SOMO) reiterated on Friday that they would sue any company buying Kurdish oil and blacklist them from deals for Iraq's sizeable crude exports. Disagreement between the KRG and the Iraqi central government also has led to tension between Ankara and Baghdad. In May, Baghdad filed a lawsuit against Ankara after Kurdish oil was sold and transported through Turkey. Baghdad claimed that the selling of the oil bypasses SOMO and violates the country's constitution.

However, KRG officials say that Baghdad cut their share of the revenues from the national budget and that they are determined to export oil via Turkey in order to compensate for the loss, claiming that to do so is an unequivocal constitutional right and in line with 2007 Iraq oil law. In the meantime KRG officials announced their intention not to be sharing any of the proceeds from its recent oil sales with Baghdad. KRG Finance Minister Rebaz Muhammet earlier this week announced that they will include the earnings from oil exports through Turkey in their budget. Muhammet said that the central Baghdad government had been making cuts to the Kurdish region's budget for the last seven months and in order to close this deficit the 17 percent profit from the oil sold will be increased to 100 percent. "In order to cover these wages, we need $1 billion [TL 2.1 billion] however, the Iraqi government is not paying our portion," Muhammet added.
RELATED TOPICS