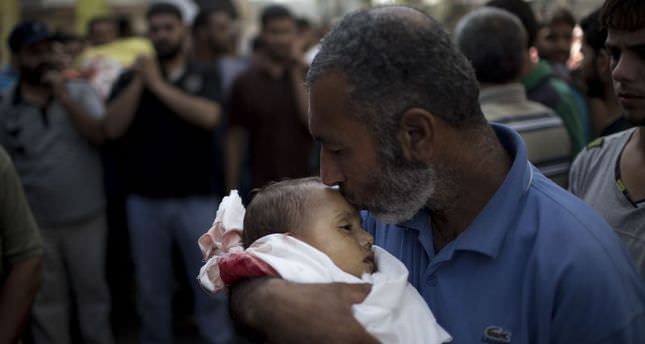 by Hatice Karahan Jul 28, 2014 12:00 am
The attacks launched by Israel on Gaza on July 8, 2014 caused hundreds of deaths and thousands of injuries in a period of three weeks.
While the so-called "Operation Protective Edge" conceals itself behind the fake "self-defense" argument, what lies at the root of the on-going massacre is totally different: Energy.

In 1999, the Palestinian Authority granted the British Gas Group (BGG) and Consolidated Contractors International Company gas exploration rights off the coast of Gaza in a 25-year agreement. Following that, two wells were drilled and extensive gas reserves were discovered in the area. The reserves, which hold an estimated 1.6 billion cubic meters of natural gas, has made Israel's mouth water since then. Negotiations between the Palestinian Authority and Israel in the early 2000s went back and forth, leaving Palestine with no concrete steps to benefit from the natural resource.
Furthermore, the course of events became even more inextricable in 2006 when Hamas won a victory in elections and took over Gaza, ousting its rival Fatah, who ended up governing the West Bank.

Upon coming to power, Hamas rejected the agreement signed in 1999 and asked for a revision of how its existence in the area was recognized.
However, it was not reasonable for Israel to let Hamas enjoy the gas revenues that would have helped it become a stronger threat. That is why the best solution for Israel was determined to be wiping out Hamas. In that regard, Israel attacked Gaza under Operation Cast Lead in December 2008, while at the same time resuming negotiations with BGG on Gazan energy.

Having lasted for three weeks, the attacks turned into a massacre with a death toll of nearly 1,400 Palestinians. On the other hand, the aim of destroying Hamas failed, striking a blow to Israel's plans with Palestinian natural gas.

While ambiguity regarding Gazan gas reserves continued, Israel discovered two new gas fields called Tamar and Leviathan off its own coast in 2009 and 2010, respectively.

The discoveries turned over a new leaf for energy-dependent Israel, which was soon after shaken by the termination of gas deliveries from Egypt. Following the cessation of Egyptian gas shipments, electricity prices in Israel, which produces more than 40 percent of its power using natural gas, went up markedly. Therefore, considering the impossibility for Israel to exploit its new discoveries until after 2017, the potential energy crisis envisaged by experts has increasingly become a major national issue.

In this sense, Palestinian resources have gained more importance in Israel in the last few years. That is why Prime Minister Benjamin Netanyahu once more leaned toward a possible arrangement with Palestine, where Fatah, who was in conflict with Hamas, would be the counterparty.

However, an unexpected development ruined the plans. Fatah and Hamas signed a reconciliation deal in April 2014, followed by a government of national unity announced in June. Hence, having lost Fatah's affinity, the Hamas problem once again reared its head, and in a tough scenario this time.

Accordingly, similar to the starting point of Operation Cast Lead in 2008, Israel had no choice but to send off Hamas in order to exploit Gazan gas. In that regard, for Israel, the community who supported Hamas had to be weakened, as well.

Thus it is not a coincidence that Israel recently launched a heavy assault on Gaza shortly after the announcement of the unity government. One of Israel's motivations for getting rid of Hamas is adding Palestinian gas reserves to its own resources and setting itself free from energy dependency.
Moreover, besides becoming energy-independent, the country also aims at exporting natural gas and dominating the Eastern Mediterranean corridor. Last but not least, Israel is definitely trying to prevent Palestine from benefiting from natural resources in and around Gaza so they can repair the economy.

In this framework, it is crystal clear that the recent Gaza massacre by Israel does not only take root from Israel's Zionist policies, but is indeed closely associated with energy geopolitics. Therefore, the genocide under the name of Operation Protective Edge is essentially the second biggest "Operation Energy" carried out by Israel in the Gaza Strip since 2008.
Last Update: Jul 28, 2014 1:36 am
RELATED TOPICS