No ISIS oil to pass through Turkey: Minister says 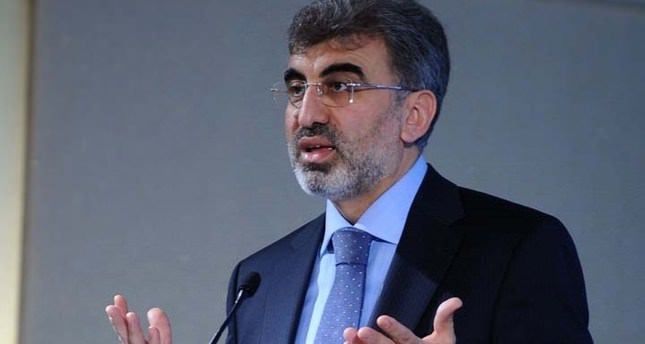 by Daily Sabah Aug 01, 2014 12:00 am
Speaking to the press before a TV broadcast, Turkish Energy and Natural Resources Minister Taner Yıldız expressed his views on the decision of a local court in the U.S. to hold the tanker carrying 1 million barrels of Kurdish crude oil in escrow and said that Turkey is not commercializing the oil illegally drilled by the Islamic State of Iraq and al-Sham (ISIS).

Taner Yıldız noted that the oil in question does not belong to Turkey but to Iraq and added, "Even if it will be banned, it is not Turkey's oil. If the oil drilled in Iraq is being transported, then it is normal for this oil to be consumed." He further noted that Turkey has never supported any kind of terrorist activity in response to the claims that Turkey is purchasing petrol from ISIS and al-Nusra.

Stating that it is impossible for Turkey to enter into any type of illegal deals, Yıldız said that he is aware of the problem between Bagdad and Erbil, which has been in the process of being resolved for some time now with the intervention of various authorities.

Turkey has established a system in Iraq for the normalization of the country and also to support Iraq's revenues. "We do not want to get involved in
the legal relation between Bagdad and Erbil. Increasing the income of Iraq is important for establishing stability in Turkey and in the region as well. Furthermore, everyone is aware of Turkey's stance and that it is not only about the petrol or the income," said Yıldız. He criticized the local court's decision in the U.S. and the claims that Turkey has a $100 billion (TL 214.33 billion) profit in this deal. He further noted that being delighted based on the assumption that the ties between Erbil and Ankara are almost broken contradicts Turkey's interests. "We believe Iraq's increasing revenues will help establish stability in both Iraq and its neighbor Turkey," added Yıldız.

Speaking to Anadolu Agency, Marina Ottaway, the Iraq expert of the Wilson Center in Washington announced that the court's decision can only be implemented if the tanker enters the U.S.'s territorial waters; otherwise holding the tanker in escrow would be deemed as piracy.

The energy minister further emphasized the fact that Turkey is a constitutional state and would never support any kind of terrorist activity in
response to the claims that Turkey is purchasing petrol from ISIS and al-Nusra. "Such claims are being uttered just to create controversy about Turkey's policies. However, even before the United Nations' decision, Turkey has not purchased petrol from ISIS or al-Nusra," said Yıldız, and that it will never aid and abet any kind of terrorist organization or activity. "Even if the sale of the petrol is banned in Texas or anywhere else, the petrol in question belongs to Iraq. Turkey is a third party to the relation between Bagdad and Erbil," Yıldız concluded.
Last Update: Aug 01, 2014 8:11 am
RELATED TOPICS