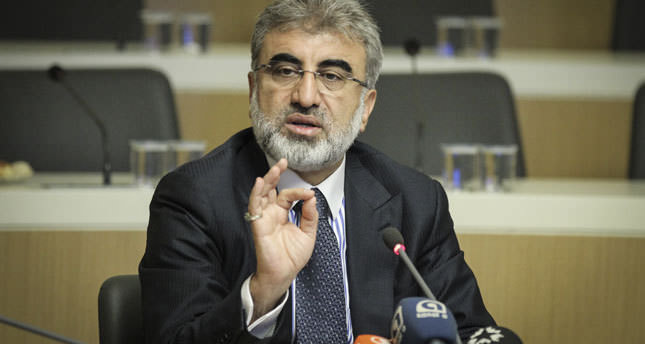 by Daily Sabah Aug 21, 2014 12:00 am
Minister of Energy and Natural Resources Taner Yıldız participated in an event held to introduce a drilling platform that was domestically produced by Turkey's Pi Makina. Yıldız said that they are taking important steps to enable Turkey to make its own drilling studies about oil, natural gas and geothermal. "We will declare a mobilization to produce national vehicles for the energy sector," stated Yıldız.

Pointing out that when a national drilling platform is produced, the Turkish Petroleum Corporation (TPAO) will the first to order it, Yıldız noted that public and private sectors allocated resources valued at TL 7.4 billion for the energy sector in the last 11 years and that TL 5 billion of it was used for equipment import. He said that in an environment where search activities increase, producing national equipment would make a significant contribution to the sector and help decrease the current account deficit. Yıldız said that 4,484 wells had been drilled since 1934, and one third of them were drilled during AK Party governments.

When Iraq achieves stability and Syria gets back to its stable status, the demand from our neighboring countries for our drilling platform will increase. In the last 11 years, we transferred TL 2.6 billion directly to the Treasury from income we earned via these studies, and nearly 10,000 people were provided with jobs." Yıldız also said that after they opened the way for oil, natural gas and geothermal search activities, the private sector would benefit from all opportunities. "The TPAO has nearly 23 drilling platforms. The TPAO will be the first to use our national drilling platform. I am also giving advice to representatives from the private sector," stated Yıldız.

ERG İnşaat Chairman Vural Erbilgin provided some information about the deep water-drilling platform. Saying that the design of the platform completely belongs to them, Erbilgin said that this kind of a platform could be imported for $40-50 million, but national production decreased its cost by half. He stated that the platform was used in Turkey, and there was demand from abroad, adding that 90 percent of the platform was produced using national equipment, while some hydraulic systems were supplied from Italy.
Last Update: Aug 21, 2014 1:48 am
RELATED TOPICS