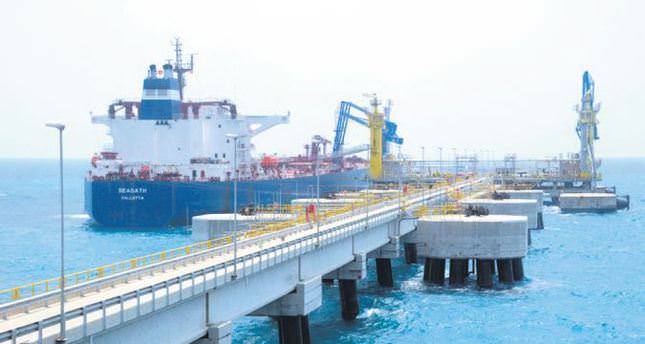 by Ali Ünal Sep 01, 2014 12:00 am
While a long-standing dispute between Iraqi Central Government and the Kurdistan Regional Government (KRG) continues, oil export via southern Turkish port Ceyhan has reached to 8.8 million barrels as of end of last weekend. Despite Baghdad's threat to blacklist and take legal action and against anyone involved in sale and U.S efforts to prevent it, KRG managed to send twelve crude oil tankers to international markets and sold most of them since oil export started from Ceyhan on May 23. Moreover volume of KRG oil flow to Turkey had increased up to 200.000 barrels per day from a previous 120,000 barrels amid ongoing threat of particularly after self-proclaimed Islamic State (ISIL) militants in the northern part of Iraq.

However, as opposed to other tankers two shipments have still been tied up by diplomatic and legal pressure from Baghdad and fate of these two crude oil tankers are still waiting by prying eyes. The United Leadership has been stationed off the Moroccan coast since June and the United Kalavrvta has been stranded in international waters off the U.S. coast since the end of July and according to shipping agencies KRG government pays about $ 150.000 demurrage charge of these crude tankers on a daily basis.

Late last month, U.S court ordered a U.S. Marshal to seize the cargo about 1 million barrels of crude oil, worth about $100 million aboard the tanker United Kalavryta in response to a complaint filed by the Iraqi government claiming the oil was smuggled out of Kurdistan without its permission but last Monday a U.S. district judge ruled that KRG's export of oil over land and sea might violate Iraqi law but not that of the United States. However, the court gave Baghdad 10 days to resubmit its case and the Iraqi oil ministry said on Aug. 28 it would challenge a U.S. court decision.

Meanwhile the United Kalavrvta loaded with approximately $100 million Kurdish oil switched of its satellite tracking devices and shown no position since last Tuesday. Similarly in recent weeks other crude oil tankers loaded with Kurdish oil switched of their tracking devices and a few days later reappeared with unloaded cargoes. Thus oil industry sources believe that the United Kalavrvta have done the same.

We still don't know the Iraqi oil ministry have challenged a U.S. court decision that stopped U.S. Marshals from seizing some one million barrels of disputed Kurdish oil docked near Texas moreover the court's response to this objection still unknown. However, in line with KRG administrations' performance to sell its crude to international markers we can assume that Iraq's threats and U.S reluctance is far from to prevent KRG oil export.
Last Update: Sep 01, 2014 10:24 am
RELATED TOPICS