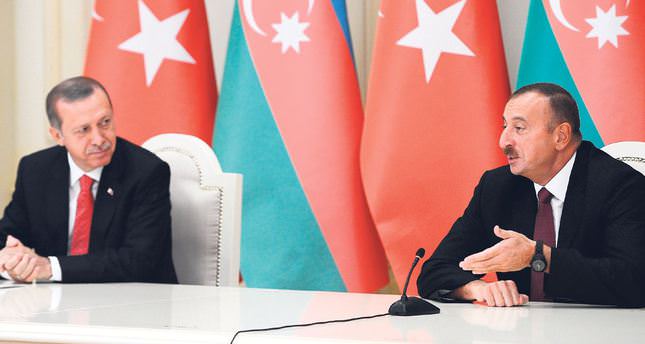 by Daily Sabah with AA Sep 03, 2014 12:00 am
A groundbreaking ceremony for the South Caucasus Pipeline, the first phase of the Southern Gas Corridor pipeline that includes the Trans Anatolia Natural Gas Pipeline (TANAP), will be held on Sept. 20, President Recep Tayyip Erdoğan said on Wednesday.

"Turkey's energy relations with Azerbaijan and, accordingly, the TANAP project hold the utmost importance," Erdoğan told the press after meeting with his Azeri counterpart, Ilham Aliyev, in Baku.

Noting that the energy transmission lines that will cross through Turkey and reach Europe are crucial, Erdoğan added that it was a valuable investment for Azerbaijan to reveal its strong position and power in the energy sector.

"After this cooperation, other sectors, including the construction and pipeline industries, will become busier. Azerbaijan's progress within the last few years, the development and growth observed in infrastructure and superstructure is observed with admiration in the world. I was - in my 11 years as prime minister and am in my new post - also glad to see such progress in our sister country. Our sister country becoming more powerful also allows us to be more optimistic about the future of Turkey," said Erdoğan.

He also noted that further steps would be taken in trade. Currently, the target is to reach $15 billion (TL 32 billion), and both sides are willing to work hard to achieve this target.

Noting that they have also discussed the energy project with Erdoğan and have presumed the advantages of the TANAP Project signed two years ago, Aliyev said the two countries will complete this project, which is under the scrutiny of the whole world, together.

"Azeri investors will invest around $17 billion to $20 billion in Turkey within the next five to six years. I am also glad that Turkey's share in TANAP and Şahdeniz has increased," said Aliyev and added that the main participants in these massive energy projects are Turkey and Azerbaijan. "The stronger Turkey is, the stronger Azerbaijan will become. Turkey's success is always a source of pride for us," noted Aliyev.

The South Caucasus Pipeline is the first phase of the Southern Gas Corridor, which will carry gas from the Azerbaijan sector of the Caspian Sea to Turkey. Then the pipeline is to be connected to the Trans Anatolia Natural Gas Pipeline and reach Europe.

The Trans Anatolia project, also part of the Southern Gas Corridor, is intended to transport natural gas, to be produced in the Shah Sea 2 field and others in Azerbaijan and possibly other neighboring countries, through Turkey to Europe.
Last Update: Sep 03, 2014 11:25 pm
RELATED TOPICS